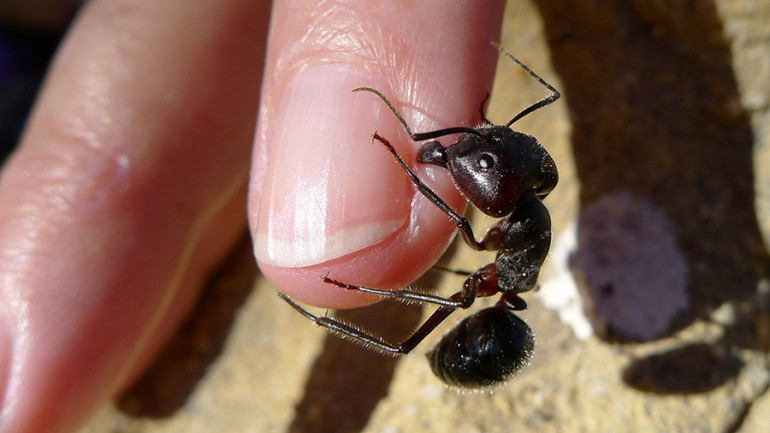 As technology and science have advanced, so too have the sophistication of such biomaterials and the ways that they are used. As you’ll hear in the TED Talk, “A new way to grow bone,” scientists can use saline to create a small pocket in a person’s leg so that stem cells there grow into new bone to heal an injurt. Another recent biomaterial advance: a lab-grown miniature brain.

The field of biomaterials didn’t get its name until the 1960s, but the concept of using materials strategically in the body has been around for a long time. We spoke to Buddy Ratner, who directs the Research Center for Biomaterials at the University of Washington and who co-edited the textbook, Biomaterials Science, to get a (non-exhaustive) tour of extraordinary material advances of the past millennia.

(9,500BC to 1000BC) Some of the first surgical sutures? Biting ants. Sutures, stitches used to hold human tissue together, date back a very long time — to the Neolithic period, according to Biomaterials Science. Ancient Egyptians created sutures from linen, while Europeans used the fiber from animal intestines. Around the same time, in South Africa and India, biting ants were used to mend wounds. Says Buddy Ratner, “If you hold the two sides of the wound together, and put the little pincers of these guys on there, they bite down hard. It’ll hold the wound closed.” Here, a biting ant photographed in Western Australia, May 2012.

(600 AD) The Mayans get the first bluetooth. No, not the wireless technology. As bioengineer Molly Stevens explains in “A new way to grow bone,” the Mayans had a clever way of fixing a lost or damaged tooth — by replacing it with a piece of blue nacre shell. “It’s hard, it’s durable. When they put it into the jawbone, it could integrate into the jaw,” says Stevens. “This material has a beautiful chemistry, a beautiful architecture.” (Also fascinating: both the Romans and Incas used gold for dentistry.)

(1829) A developing idea: metal in the body. In 1829, Alabama doctor Henry Levert began experimenting to see if metals could be used safely as medical implants. According to The History of Surgery in the United States, he tested different metallic sutures in 21 experiments on dogs, and found that, in general, platinum ones were better tolerated than those made of gold, silver or lead. Over the next few decades, surgeons became interested in using metal screws and plates to fix bones instead of relying on splints and braces. According to medical tech company Zimmer, German surgeon H. Hansmann became the first doctor to do such a fix successfully, in 1886.

(1881) The quest for an artificial heart. By now, scientists had a pretty good idea that the heart worked like a pump — thanks to the theories of earlier philosophers and physicians. Buddy Ratner explains: “People said, ‘Well, we know pumps. We pump water all the time.’” And so began a flurry of experimentation as they began to start copying that functionality. In 1881, French scientist Etienne-Jules Marcy (pictured) published a design for an artificial heart — though it would be 100 years before anything similar would be implanted in a human.

(1926) A breakthrough: stainless steel. Although metal was being used in the body, not a lot was known about what was actually safe at this point. In 1924, Dr. Arthur Zierold of Minneapolis took up where Levert’s dog research left off, and found that iron and steel corroded too rapidly in the body to be useful; that copper, aluminum and zinc caused tissue discoloration and that gold, silver and aluminum weren’t great for bodily fixes either. By 1926, experiments with a specific type of stainless steel, dubbed “18-8,” proved promising. “The discovery of stainless steel technology allowed metals to be used in the body routinely and at reasonable cost,” says Buddy Ratner. (Things would get even better in a couple of decades, with the introduction of titanium.)

(The late 1940s) “Hero surgeons” + plastic = big advances. The years following World War II saw a huge increase of new biomaterials and techniques for using them. Buddy Ratner attributes this to two factors. Firstly, that surgeons on the battlefield were given carte blanche to try new things to save their patients, and many of these so-called “hero surgeons” got creative. Secondly, plastics became widely available. “It was a seminal moment,” says Ratner. “During the war, many of the plastics we take for granted were considered war necessities … Once the war was over and these were released, physicians saw a couple of very obvious reasons why plastics would be good. They’re a lot easier to fabricate into shapes than metal. Plastics are light, and they have this wonderful quality of inertness.” Shown here, an American Army doctor operates on a US soldier wounded by a Japanese sniper in an underground surgery room, behind the front lines on Bougainville island, December, 1943.

(1949) A lens to prevent blindness. As Molly Stevens describes, opthalmologist Sir Harold Ridley found that many fighter pilots had shards of plastic in their eyes after WWII. It turned out to be material from their planes — yet it had caused no inflammation or irritation. Ridley eventually used the same plastic to create intraocular lenses for the treatment of cataracts (shown). The first implant into a human eye was done in 1949. “We’ve revolutionized this necessity to go blind via this remarkable lens,” says Buddy Ratner. (Side note: Leonardo da Vinci sketched the concept of a contact lens for the surface of the eye in 1508; the first mass market version was also developed in 1949.)

(1952) The first blood vessel replacement. You know what there was a lot of after World War II? Parachute material. Surgeon Arthur Voorhees had the idea to use it to create the first synthetic blood vessel. Today, the material most often used for arterial replacement is Gore-Tex, first used to insulate wires — until creator Bill Gore was playing with a piece of it on a ski lift in Colorado. “The guy next to him was a vascular surgeon,” says Ratner. “He looked at this and said, ‘Wow, this would be great for fixing blood vessels.’”

(1961) Hip replacements get hip. Replacing the hip was another idea that took a long time to make the leap from idea to reality. According to Biomaterials Science, the first attempt at this surgery in 1891 was not successful, nor were the many attempts made from the 1920s through 1950s. John Charnley, a surgeon working in a former tuberculosis sanitarium in England, perfected the materials and procedure in 1961. Where his contemporaries used fluid to try to lessen friction in the joint, Charnley searched for a slippery solid to do the same.

(1960s to 1980s) The field of biomaterials takes off. When Buddy Ratner was doing his PhD work at the Polytechnic Institute of Brooklyn, biomaterials were a new concept. “It wasn’t even a field then,” he explains. “It was just a bunch of scientists from multiple disciplines — mechanical engineers, electrical engineers, chemical engineers, chemists, biologists — all thinking about how we can apply some new things to medicine. That coalesced into a field.” During this period, many advances were made: pacemakers, knee replacements, kidney dialysis, breast implants, stents (shown), heart valve replacements… At the same time, new materials such as silicone, Teflon, hydrogels and bioglass were explored for how they might be used in medicine.

(1997) Tissue engineering becomes real. The next logical step for biomaterials: creating actual biological materials that could be used for repairs and improvements in the body. While scientists experimented with the idea of growing cartilage and skin in the 1970s and 1980s, according to the textbook Fundamentals of Tissue Engineering and Regenerative Medicine [PDF], the field came to the fore in 1997, when anesthesiologist Charles Vacanti created a mouse with cartilage in the shape of a human ear on its back. (Cloned sheep Dolly rose to fame that same year — the stuffed version shown here.) Research into growing different types of tissues rapidly accelerated.

(2006) The first lab-grown organ is implanted in a human. Surgeon Anthony Atala made headlines in 2006 when he and his team at the Wake Forest Institute for Regenerative Medicine announced that they had grown bladders from the cells of patients and successfully implanted these lab-nurtured organs. They did this by taking a small piece of tissue and then growing new cells outside the body along a scaffold — a process that took six to eight weeks. “This is one small step in our ability to go forward in replacing damaged tissues and organs,” Atala said at the time.

(2013) A lab-grown brain? The practice of tissue engineering and growing organs is still very new — and experimentation continues at a rapid clip. (Above, check out heart tissue grown at Genspace by Nina Tandon.) Just this year, scientists at Japan’s Yokohama City University conducted a promising experiment in which they transplanted lab-grown human liver cells into mice. Surgeons at Duke University successfully implanted a bioengineered blood vessel into a patient. And at the Austrian Academy of Science, a team made a splash by growing a miniature human brain in the laboratory. At 20 to 30 days of growth, this brain developed distinct regions, including a cerebral cortex.

It’s always difficult to predict where a field might head next, but Buddy Ratner has some ideas. He sees the brain as a space where we may start to see biomaterial applications, ditto cancer treatments. But most promising to him is this craft of regenerative medicine. “We can regrow or rebuild parts that have been damaged, lost or diseased. That covers everything from regenerating toes to regenerating hair — from the bottom of your body to the top of your head — and everything in between,” he says. “We’re seeing a lot of evidence that the whole way medicine is done will change because, as you start aging, parts are wearing out, breaking down, becoming diseased, and needing replacement. Replacements are the critical thing.”