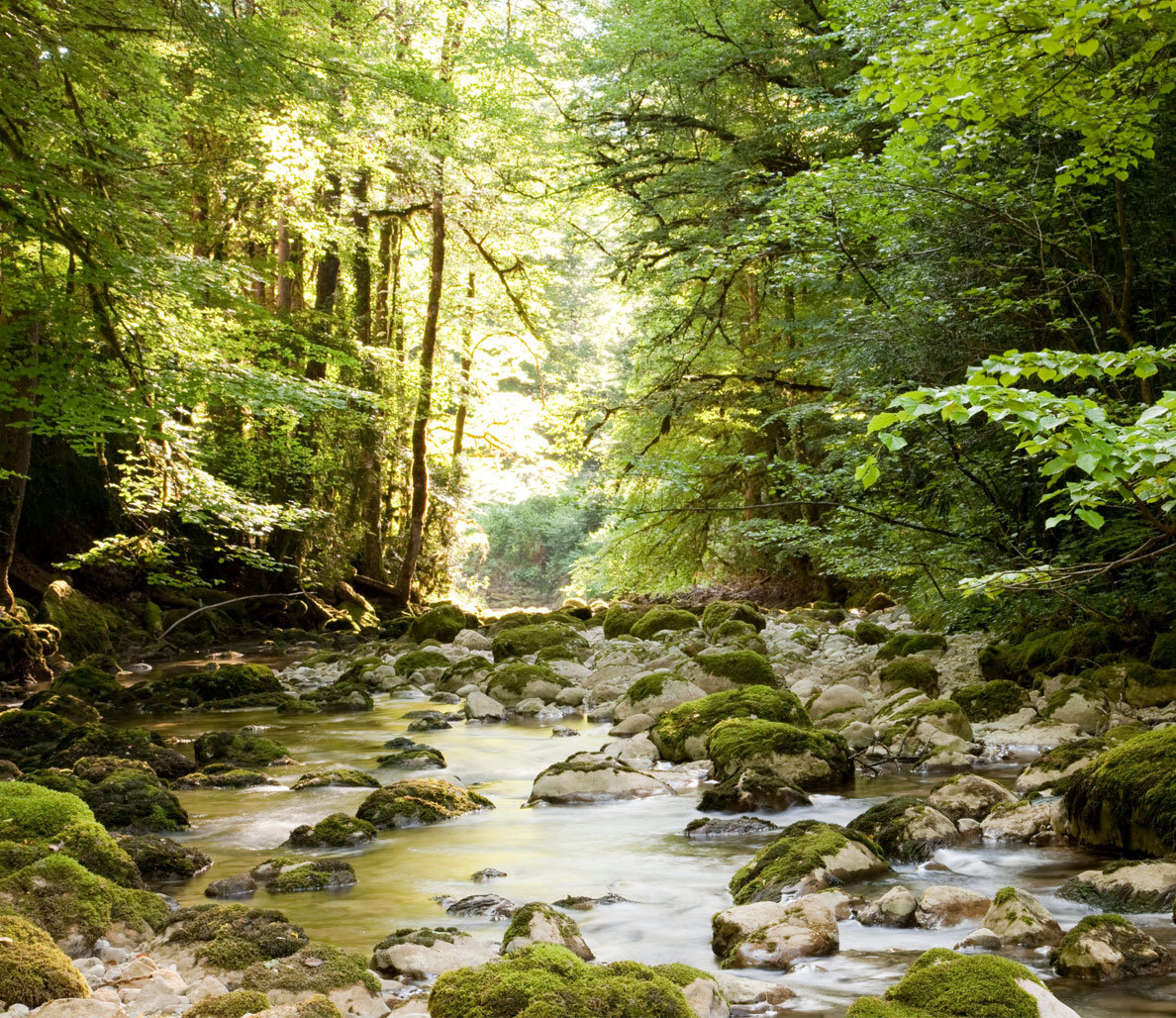 Think fast: You’re stranded in the woods with darkness falling and no help in sight. Can you to get safety before the elements (or wild animals) get to you?

Survival Skill #1
Locating a Suitable Campsite
“You want to stay high and dry,” Stewart says. Avoid valleys and paths where water may flow toward you (flash floods get their name for a reason—they can deluge a low-lying area in minutes). Choose a campsite free from natural dangers like insect nests and widow-makers—dead branches that may crash down in the middle of the night—as well as falling rocks. Ideally, you want to be close to resources like running water, dry wood (from which you can assemble your shelter and build a fire) and rocky walls or formations that can shield you from the elements.

Survival Skill #2
Building a Shelter
Not surprisingly, hypothermia is the number one outdoor killer in cold weather. That means a well-insulated shelter should be your top priority in a prolonged survival situation. To make a simple lean-to, find a downed tree resting at an angle, or set a large branch securely against a standing tree, and stack smaller branches close together on one side. Layer debris, like leaves and moss, across the angled wall. Lastly, insulate yourself from the cold ground–which will draw heat from your warm body–by layering four to six inches of debris to lie on.

Survival Skill #3
Starting a Fire With a Battery
Any battery will do, says Stewart. “It’s about short-circuiting the battery.” Connect the negative and positive terminals with a wire, foil (like a gum wrapper), or steel wool to create a spark to drive onto your tinder bundle. Have your firewood ready.
Survival Skill #4
Building Your Fire
Stewart views fire building in terms of four key ingredients: tinder bundle of dry, fibrous material (cotton balls covered in Vaseline or lip balm are an excellent choice, if you’ve got them) and wood in three sizes—toothpick, Q-tip, and pencil. Use a forearm-sized log as a base and windscreen for your tinder. When the tinder is lit, stack the smaller kindling against the larger log, like a lean-to, to allow oxygen to pass through and feed the flames. Add larger kindling as the flame grows, until the fire is hot enough for bigger logs. Check out some of our fire starters.

Survival Skill #5
Finding clean water
“You’ll come across two kinds of water in the wild,” Stewart says. “Potable water that’s already purified, and water that can kill you.” When it comes to questionable water—essentially anything that’s been on the ground long-term, like puddles and streams—your best option is boiling water, which is 100 percent effective in killing pathogens. But sometimes boiling isn’t an option.

Rain, snow, and dew are reliable sources of clean water you can collect with surprising ease, and they don’t need to be purified. With a couple of bandannas, Stewart has collected two gallons of water in an hour by soaking up dew and ringing out the bandannas. You can also squeeze water from vines, thistles, and certain cacti. Are there any maple trees around? Cut a hole in the bark and let the watery syrup flow—nature’s energy drink.

Survival Skill #6
Collecting Water With a Transpiration Bag
Like humans, plants “sweat” throughout the day—it’s a process called transpiration. To take advantage of this clean, pure source of water, put a clear plastic bag over a leafy branch and tie it tightly closed. When you return later in the day, water will have condensed on the inside of the bag, ready to drink. Check out some of our products for collecting water.

Survival Skill #7
Identifying Edible Plants
There’s no need to go after big game in a survival situation, and chances are you’ll waste energy in a fruitless attempt to bring them down. “Make your living on the smalls,” Stewart says. That means eating edible plants (as well as small critters like fish, frogs, and lizards).Separating the plants you can eat from those that will kill you is a matter of study and memorization. Buy a book to familiarize yourself with plants in different environments. And don’t take any chances if you’re uncertain (remember how Chris McCandles died in the end of Into the Wild). A few common edible plants include cattail, lambsquarter (also called wild spinach), and dandelions. Find these and eat up.

Survival Skill #8
Using a Split-tip Gig to Catch Critters
Gigging (hunting with a multi-pronged spear) is the simplest way to catch anything from snakes to fish. Cut down a sapling of about an inch in diameter, and then split the fat end with a knife (or sharp rock) into four equal sections ten inches down. Push a stick between the tines to spread them apart, then sharpen the points. You’ve got an easy-to-use four-pronged spear. Much easier for catching critters than a single sharp point.

Survival Skill #9
Navigating By Day
If you ever find yourself without a GPS tool (or a simple map and compass) you can still use the sky to find your way. The most obvious method to get a general bearing by day is to look at the sun, which rises approximately in the east and sets approximately in the west anywhere in the world. But you can also use an analog watch to find the north-south line. Just hold the watch horizontally and point the hour hand at the sun. Imagine a line running exactly midway between the hour hand and 12 o’clock. This is the north-south line. On daylight savings? Draw the line between the hour hand and one o’clock.

Survival Skill #10
Navigating By Night
Find Polaris, or the North Star, which is the end of the Little Dipper’s handle. If you can find the Big Dipper, draw a line between the two stars at the outer edge of the constellation’s dipper portion. Extend this line toward the Little Dipper, and it will line up with Polaris. Face Polaris, and you’re facing true north. If there is a crescent moon in the sky, connect the horns of the crescent with an imaginary line. Extend this line to the horizon to indicate a southerly bearing. Once you determine your direction, pick a landmark nearby or in the distance to follow by daylight.

Survival Skill #11
Tying a Bowline
Knots come in handy for a slew of survival scenarios—tying snares, securing shelters, lowering equipment or yourself down a cliff face. Ideally, you should have an arsenal of knots, from hitches to bends to loops, in your repertoire. But if you learn only one, learn the bowline.

“It’s your number one, go-to rescue knot,” Stewart, who uses a mnemonic for every knot, says. It’s foolproof for fastening rope to an object via a loop, particularly when the rope will be loaded with weight: the harder you pull, the tighter the knot gets. Stewart’s mnemonic for tying the bowline from any angle is “the rabbit comes out of the hole, around the tree, and back in the hole.” Use this mnemonic, says Stewart, and “it doesn’t matter if you tie it spinning on your head. It’s going to come out right.”

Survival Skill #12
Sending Up a Survival Signal
At times—like when you have a debilitating injury—your only hope for getting saved is to maximize your visibility so rescuers can find you. Two methods, if used properly, will guarantee that, if someone’s looking, they’ll see you.The first is a signal fire—and the first rule is to put it out in the open for visibility. That means hilltops or clearings in a forest where nothing, like a cliff face or trees, will disperse the smoke. Create a platform to raise the base of the fire off the ground so moisture doesn’t saturate the wood. Save your absolute best combustible material for your signal fire to guarantee a quick light. Once the fire is lit, pile on green branches, like pine boughs in winter, to produce thick smoke. “It’s not about warmth, it’s about 15 seconds of smoke,” Stewart notes. “That’s about all you’ve got when you hear a plane before it’s out of sight.”

The second is a mirror signal. A flash from signal mirror—even at night, by moonlight—can be seen for miles, much farther than any flashlight. You don’t need a store-bought signal mirror to be effective. Improvise with any reflective surface you’ve got, from rearview mirrors or headlights to a cell phone screen. Aiming the reflection is the key, and it’s simple. Hold out a peace sign and place your target–be it plane or boat–between your fingers. Then flash the reflection back and forth across your fingers.