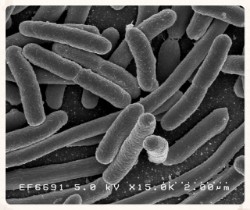 Some Escherichia Coli are becoming resistant to antibiotics

A proportion of the bacteria found along the U.K. coastline are pathogenic. Of these pathogen some, worryingly, are antibiotic resistant according to a new survey.

Researchers have found that some of the Escherichia coli bacteria found floating at the surface of Britain’s coastal waters are resistant to antibiotics. Samples were taken from 97 different costal spots around Wales and England. Of these 97 sites, 15 contained E. coli that was resistant to third-generation cephalosporins, These are a class of antibiotics that are used as antibiotics of last resort, when the other antibiotics cannot be used.

Although the actual proportions of antibiotic resistant bacteria was low (less than one tenth of one percent), this is still a dangerous number and poses a risk to people who swim with cuts or to aquatic sports enthusiasts.

Commenting on the findings, lead researcher Dr. Gaze said in his conference speech: “Although this research has established that coastal waters are a potential source of exposure to antibiotic-resistant bacteria, we’re not recommending that people stop visiting the beach. Exercise and enjoyment of the natural environment has many established benefits for health and well-being and this kind of research will help us ensure people can still make the most our coastal resources.”

The growing menace of antibiotic resistance is, arguably, the single biggest threat faced by the world’s population.

The study was conducted by microbiologists working at the University of Exeter. The findings were taken to a recent meeting of the Society for General Microbiology.