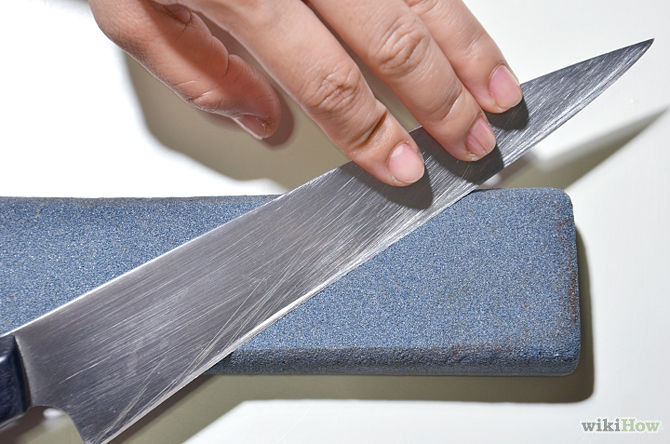 Ancient peoples used anything and everything to sharpen swords and blades of many sized and shapes.  The most common would have been stones and leather since they were not able to run down to Sharper Image for their fancy “5 bean laser enhanced plasma electric honing blade enhancer”.

There are a couple techniques and they all work to put a sharp edge back on your Bastard Sword.

There are different ways to sharpen a blade based on what you’ll be using your knife for as an example a whittling knife may have a different cut than a cooking cleaver.

Lubricant. Most knife sharpening experts recommend you use some sort of lubricant when sharpening your knife. The lubricant can come in a variety of forms, from water to oil. Most of the literature out there recommends mineral oil to be used for knife sharpening. The lubricant reduces heat from the friction that is created from sharpening your knife. Too much heat can actually warp your blade. Lubrication also helps clear out the debris, or swarf, that is created as you grind your knife blade on the stone. You can pick this up at most hardware stores for a couple bucks.  Although we mention this lubricant isn’t necessary with most basic stones. So if you’re out in the field and need to sharpen your knife, don’t stop yourself just because you don’t have some mineral oil handy.

How to Sharpen a Pocket Knife

2. Prep the stone. If you’re using a lubricant, get it out. Pour an ample amount of mineral oil all over the surface of the stone. You don’t need to drench it, but don’t be stingy either.

3. Place the knife blade flat on the stone and raise it to a 10 to 15 degree angle. The key to knife sharpening is maintaining a constant angle. Different knives require different sharpening angles. For a pocket knife, shoot for a 10 to 15 degree angle. This will give you an edge that’s sharp enough for most daily needs, but not sharp enough to perform heart surgery.  Keeping a constant angle by hand takes a lot of practice. If you’re having difficulty, you might consider investing in a sharpening guide. It takes all the guess work out of maintaining the needed angle. They cost about $10.

4. Start sharpening the first side of the blade. With your blade set at the prefect angle, you’re ready to start sharpening. Imagine you’re carving off a slim piece of the stone’s surface. Personally, I bring the blade into the stone. Other people stroke the blade away from the stone. Both ways work, so just use whatever technique you prefer. If the knife blade is curved or if it’s longer than the stone, you’ll need to sweep the blade sideways as you work, so the entire edge is sharpened evenly. Apply moderate pressure as you sharpen. No need to bear down hard on the blade. After you make one stroke, start back at the beginning and repeat. Do this about 6-12 times.

7. Flip the stone over on the fine grit and repeat above process.

8. That’s it… for a basic sharpening.

Sharpening with a Steel

When a knife is used, the edge eventually becomes dull. The edge will turn either to the left or right side depending on how you hold your knife when cutting. Quality knives with high carbon/molybdenum/vanadium alloy have elasticity and can easily be re-aligned by a sharpening steel. Do not use a diamond-coated steel or a pull-through manual or electric sharpening device for maintaining the edge. These devices will destroy your turned edge. They can be used to sharpen, but not for maintanance.

Place the knife blade against the tip of the sharpening steel at an angle of approximately 20 degrees. Pull the knife down and across the steel, describing a slight arc. Repeat this action on the back of the steel to sharpen the other side of the blade. Repeat steps 2 and 3 five to ten times, alternating the left and right side of the blade. It is very important to maintain the angle of 20 degrees and to run the full length of the cutting edge along the steel from the hilt to the tip of the knife. Speed of movement plays no part in this process.

You can learn to sharpen any razor on a stone, and if you have experience, or use the right sharpening system you will get very good results.  The principle of grinding any knife is restoring the gross shape of a blade according to it’s grind-type ; this is mostly done with machines such as grinding wheels. Grinding does not sharpen a knife.  The principle of honing is to create a good cutting edge angle and the blade part directly adjacent to it, the relief. The relief is created by honing with a secondary angle on a stone until a burr appears, and subsequently create the primary angle (this is the cutting angle, which is somewhat greater than the secondary angle, but both under 25 degrees) to remove the burr. The relief/secondary/primary angle principle makes the blade more resistant for less than delicate use.

First, obtain the correct sharpening tools to perform the task. Many of the sharpening kits on the market offer serration hones as options.  Second, have the proper technique to use.

Most factory ground serrations will have the same angle as the plain edge portion (assuming the blade is partially serrated), which means in the neighborhood of 20 to 25 degrees.

Once everything is set up, you can begin the process. Using firm pressure, work the hone in a back-and-forth motion, perpendicular to the cutting edge. Every so often, stop and feel for a raised burr on the backside of the blade. Only move on to the next tooth when you see or feel a raised burr. Once you have completed sharpening the ground side of the blade, flip the knife over.

There are many good sharpeners on the market today. The main factor in sharpening is the device you use to remove the material from the blade must maintain a uniform angle for you and not allow your efforts from stroke to stroke to change the angle of pressure you are putting on the cutting surface of the blade. If this angle relationship is changing from stroke to stroke, you will end up with a rounded edge that will feel sharp for a short period of time and dull rapidly.