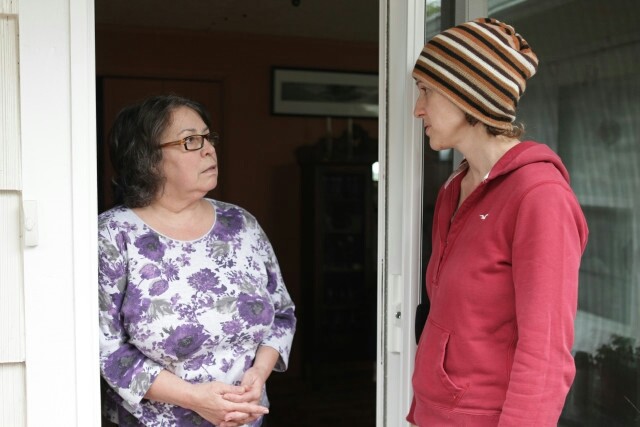 Ed and Sara Johnson — one of the household’s participating in OPB’s “Living Off Your Quake Kit” weekend — know three of the 10 families who live on their block, and estimate they’re the youngest couple there.

After trying to think of more people on the block, they decided to visit their next door neighbors, the Lapworths.

To the Johnsons’ surprise, it turns out both Cheryl and Roger Lapworth work on the emergency preparedness teams at Legacy Mt. Hood Medical Center.

“We didn’t know they had that expertise!” said Ed. “Both of them … are ready for an emergency.”

The Lapworths knew an additional five neighbors. The neighbors the Johnsons learned about included a retired marine, a carpenter, a man who’s “very mechanical” and another who’s good with cars. That expanded their community to eight out of the 10 estimated neighbors.

Alice Busch, training coordinator for Multnomah County Emergency Management, said meeting your neighbors is just as important as gathering food and water for an emergency kit.

“The first thing on your list should to be throw a party,” said Busch.

That’s a notion that came to the Johnsons’ minds almost immediately after returning home.

“We like having people over,” said Sara. “We could see if we could get everybody, on a warm day like today, to come and hang out in our backyard and we could talk about this stuff.”

Busch said even if a person doesn’t have money or supplies after a disaster, skills can be useful for bartering and community survival.

“Do you have a friend who can store supplies, but you have another way to be part of the disaster solution? You can help care for pets, or watch kids, for example,” she said.

“We don’t all have the same skills. Focus on the skill sets you have that aren’t about material supplies, but that are good for trade.”

In Lincoln City, Krista Eddy and Patrick Alexander live at about 400 feet of elevation, on a hill that they expect would become a sort of island after a tsunami. Of the 12 houses on their street, they can name 11 of their neighbors.

Laura Quilman lives three houses down and Krista found her at home.

“I think we would work together as a community,” said Quilman, after Krista asked how their street would fare after a disaster.

They each said that they would check on each other as soon as their own households were safe.

“If something happened to either of them, would Quinn be alone?” the neighbor asked.

“I hadn’t even thought about that,” said Krista, covering her mouth. “What if I was knocked out and he was just wandering around the rubble?”

While preparing for an earthquake can be a daunting — and sometimes stressful task — the director of the Portland Bureau of Emergency Management, Carmen Merlo, says there’s no reason to be afraid.

“Earthquakes are survivable,” she said. “It’s about community and connections.”