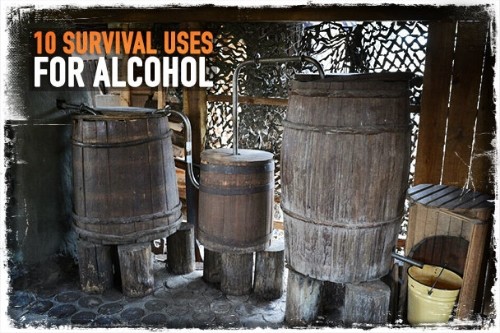 First a little background, a chemistry lesson if you will, before we get started. Ethyl alcohol or grain alcohol is also known as ethanol or even better known as “drinking alcohol”. Its chemical compound is C2H5OH, and it is produced by fermentation.

Ethanol is, different from Isopropyl alcohol (C3H80), which is more commonly known as rubbing alcohol. Do not confuse the two. Both are produced by the fermentation process however, the fermenting agent for isopropyl is a bacterium while, ethyl uses a yeast.

Caution: Isopropyl alcohol is converted in the liver into acetone making it toxic, in other words, it will kill you if consumed.

Ethanol is not converted into a toxin in the liver and so can be consumed.

Okay So What Are the Uses for Ethanol during a Crisis: The Alcohol You Can Also Consume?

1.) Grain Alcohol as a Disinfectant for Wounds

Ethanol can be used for wound irrigation and as a topical disinfectant in an emergency. It works to kill bacteria by denaturing proteins and by dissolving lipids. However, even though it will destroy certain bacteria in and around wounds, it also destroys cell tissue, because of how it reacts to proteins, in other words it is caustic, and can cause tissue damage in some cases.

In an emergency killing deadly bacterium in cuts and wounds is the priority. Just remember you can damage the tissue in and around the area with prolonged use.

When purchasing alcohol for future use as a disinfectant once the SHTF purchase the highest proof available for greater alcohol content by volume.

Ethanol evaporates quickly so in some cases, contact with surfaces may not be long enough to kill the bacteria. Therefore, when disinfecting knife blades, thermometers, scalpels and so on, submerged the surfaces in the solution if possible, versus just wiping or spraying them down with the solution. Pour enough solution in a glass or basin so the entire surface to be disinfected can be submerged. Wipe down eating/food preparation surfaces and leave wet, and then reapply for best results as it dries.

Simply swish around for at least one minute and spit out, to help destroy bacteria in the mouth particularly at the gum line and in between teeth. Force the solution between the teeth to remove food particles and to reach crevices where bacteria are harbored.

Moisture is what mold spores thrive on, so depriving them of their life blood if you will, can help control its growth and eventually destroy the mold. Alcohol displaces water, and as the alcohol evaporates it creates a gas that floats from the surface with the water molecules clinging to it.

By the way the vapor is what is flammable so stayed tuned for more on this later in the article.

Dogs in particular can have problems with their ears because of water collecting in them. A few drops of alcohol can help displace the water in your pet’s ear, as well as, your own ears to help keep bacteria at bay. Some people state that equal parts of white vinegar and alcohol works better than just using alcohol by itself for removing water from the ear canals.

Vodka is the preferred room deodorizer for some people because it is clear with no apparent odor. It is sprayed in the air to kill odor causing bacteria. Keep in mind grain alcohol is not effective against spores, so it will do little to reduce certain allergens and bacteria in the spores floating in the air. Spray the solution in shoes, on bedding and clothes and then let air dry in the sunlight if possible to destroy odors.

Bartenders and those that like to experiment will do what is called “float” alcohol on other alcohol to create a floating flame. Bacardi 151 for example, will float on top of a drink with lower alcohol content, and thus can be ignited without igniting the product. The same applies to cooking certain foods. You have probably seen chefs splash a little alcohol in a fry pan and then tilt it so the vapor makes contact with the gas cooking flame.

It is all about the vapor and to use alcohol to start a fire you have to move quickly. Soak a piece of cloth, and then put your dry tinder on top, so the vapor flows up through the tinder. In most cases the cloth itself will not ignite before the alcohol has burned off, so it is important you have dry tinder on top. Otherwise you will simply burn off the alcohol from the cloth without actually igniting the cloth. The flame is nearly invisible in daylight. Typically alcohol at 80-proof or more can be ignited rather easily.

It was debated as to whether or not to mention alcohol and bartering, because some find it so obvious of a choice for a bartering item that it goes without saying. For those that have been prepping for years however, you have to keep in mind some are just getting started and so what may seem obvious to you will not be so obvious to others.

Even if you do not drink alcohol others do. In fact alcohol consumption is at record levels, so someone is drinking it, and just because the SHTF does not mean people will stop drinking it if it is available. Make sure it is available, because it can be traded for other items you may desperately need.

Stockpile a variety and remember you do get what you pay for, so spend a little extra because quality will pay off.

9.) Used As a Deodorant for Body and Feet

Bacteria need moisture to grow and growing bacteria cause odors. We already know that alcohol displaces moisture, which will in turn kill off bacteria. Use it on the body to help with body odor, particularly odor problems with your feet. Some people even soak their feet in vodka, for example, to help control foot odor when you cannot wash your feet regularly.

Alcohol blended with certain other compounds, olive oil, for example, can be used as a bug repellent that can be rubbed on the skin. Again, the go to choice for many is vodka. Mix equal parts together and rub on exposed skin.

How it works to repel or kill certain insects is not entirely clear, but studies have shown it does work to some extent. Possibly the displacement of moisture creates certain results or the ingredients in the alcohol are toxic to some insects. There are plenty of myths and rumors surrounding many so-called home remedies, so experiment safely to find out what works best for you.

Obviously, the above listed uses for grain alcohol are not the only uses during a crisis. Do some research and if you experiment do so safely and come up with some more uses for “drinking alcohol” once the SHTF.