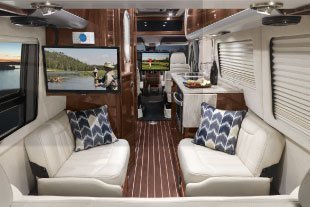 High cost of oil and gas fuels a boom in wood stoves. But what is the cost to climate?

The Beatty family near Paxico, Kan., heats their entire home with this wood stove. Modern wood-burning stoves emit far fewer pollutants in the form of fine particulates than did models from the 1970s. Environmentalists can’t agree on the stoves’ carbon footprint.  David Pulliam/The Kansas City Star/AP/File

George and Judith Reilly own a big antique house on the main street of Brandon, Vt., a picturesque town on scenic Route 7. The house’s front parlor doubles as a gallery to display the fabric art Judith creates in her upstairs studio.

Last spring, when oil for the house’s furnace began to top $4 per gallon, Mr. Reilly did some quick calculating and decided he could save up to 50 percent on his heating cost this winter by installing a stove that burned sawdust pellets. Over the summer, he placed an order with first one, then another local dealer. But by October, both had failed to find him a stove. Finally, he discovered one on eBay. The only problem: Reilly had to drive his pickup truck from Vermont to Maryland to claim it. Last weekend, as nighttime temperatures dipped below freezing, he was installing his prize, which he hopes will be his main source of heat this winter.

Both traditional and pellet-burning wood stoves are in high demand as cold weather begins to grip the northern United States and Canada. Sales of wood stoves are up 55 percent so far this year over last, according to industry figures. And sales of wood pellet stoves are even hotter: up 135 percent over the same period last year.

But as people polish their stoves and admire their woodpiles, environmentalists and health officials are expressing concern that burning wood in old or poorly designed stoves could add significantly to air pollution. And although wood represents a local and renewable fuel source, its credentials as a “carbon neutral” fuel – not adding to global warming – are hazy at best.

Even the very cleanest-burning and best-maintained wood or pellet stoves release a much higher level of emissions than a typical oil furnace, a common heating fuel in the Northeastern US. Natural gas, the most popular heating fuel nationwide, burns even cleaner than oil.

Wood smoke “is a fairly toxic cocktail,” says Lisa Rector, a senior policy analyst for NESCAUM, a nonprofit group that advises eight Northeastern US states on air-pollution control issues. According to the Environmental Protection Agency (EPA), wood smoke contains a number of potent health hazards, including carbon monoxide, nitrogen oxides, and fine particulates. The American Lung Association estimates that in some locales fireplaces and wood stoves are the source of 80 percent of the fine particulates found in the air.

Judging how polluting a particular wood stove is can be tricky. Since the early 1990s the EPA has mandated that new wood stoves emit no more than 7.5 grams of emissions per hour, though many models have been tested with much lower emissions. Stoves manufactured in the 1970s and ’80s emitted about 42 grams per hour, according to the Hearth, Patio, and Barbecue Association (HPBA), which represents wood stove manufacturers.

But how much pollution a stove emits also depends on what is being burned.

“A tree is not a tree is not a tree,” Ms. Rector says. “It is what it lives in.” Trees can pick up substances such as mercury, sulfur, or chlorine from the soil in which they grow. And if the wood is not properly seasoned or wet, combustion will be less complete. (See below.) Not only will the stove give off less heat, it will pollute more.

One concern this winter is that people may decide to fire up an old wood-burning stove. “We’re still getting calls from people who have these 30-year-old [wood stoves] that their uncle gave them,” says Bob Christensen, the owner of En-R-Gy Saver Inc. in Holliston, Mass., which sells six brands of wood and pellet stoves. His stove sales are up about 50 percent this year over last.

The poster child of wood-heat pollution is the outdoor boiler, a wood furnace located in a separate outbuilding that sends hot water through underground pipes to a home or business. Outdoor wood boilers can emit 206 times more pollution than an oil furnace, or about 3,000 to 5,000 times more than a natural gas furnace, Rector says. They are often a source of complaints from neighbors who don’t appreciate being bathed in smoke.

Maine, New Hampshire, and Vermont have moved to set emissions standards on outdoor boilers. Manufacturers are getting the message, saysDeidra Darsa, a spokeswoman for HPBA. “They have done an incredible job in turning their products around in the last year or so and come up with some very clean-burning products,” she says. The EPA is also engaged with outdoor boiler manufacturers to set up new emissions guidelines.

Because of its pollutants, wood-burning in general is most appropriate “at the urban fringe and beyond,” not in cities, which are already dealing with many other sources of air pollution, says John Gulland, cofounder of woodheat.org, a nonprofit website that aims to offer impartial information about firewood and wood-burning stoves.

Just like oil and gas, wood gives off carbon dioxide and other greenhouse gases when burned. But it also offers some carbon-saving benefits that make judging its effects on global warming difficult.

“I like to call it ‘75 percent carbon neutral,’ ” Mr. Gulland says. While wood burning does release carbon dioxide and methane, advocates argue that the trees would do that anyway in the forest as they die, fall over, and decompose.

But only a portion of the CO2 from decomposition enters the atmosphere. Some remains in the soil. Meanwhile, forests absorb carbon dioxide, so maintaining forested areas that are harvested for wood is a carbon plus. And if the wood being burned is scrap from a sawmill, for example, then no additional trees are being felled and no additional carbon created.

The question can quickly get knotty.

“On a scale of carbon neutrality, it’s better than burning a fossil fuel, but it’s not the same as wind or solar,” Rector says. “It’s a very complicated question,” she says. “We still need to let the scientists figure it out.”

How to burn wood more cleanly

The Environmental Protection Agency (EPA) has these recommendations for people who burn wood:

• Use a properly installed and vented EPA-certified wood stove.

• Season wood outdoors through the summer and for at least six months. Properly seasoned wood is darker, has cracks in the end grain, and sounds hollow when smacked against another piece of wood.

• Store wood outdoors, stacked neatly off the ground with the top covered.

• Use clean newspaper and dry kindling to start fires.

• Have the wood stove cleaned and inspected annually.

• Don’t burn household trash or cardboard. Plastics and colored inks on magazines, boxes, and wrappers give off toxic chemicals when burned.

• Never burn ocean driftwood, plywood, particle board, or any wood with glue on or in it. They all release harmful chemicals when burned.