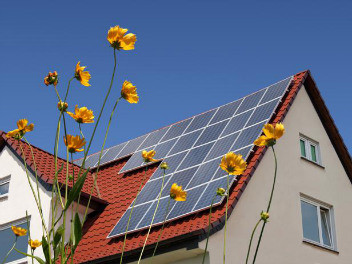 It’s no secret that an opposition to sustainable living exists. Earlier this year, Texas state brought several SWAT teams to a sustainable community and threatened to shut it down. Each one of the community members were initially handcuffed at gunpoint. It was called “The Garden of Eden Community,” and was totally self sustainable.

This time, it’s Robin Speronis that’s come under fire. She lives off the grid in Florida, completely independent of the city’s water and electric system. A few weeks ago, officials ruled her off-grid home illegal. Officials cited the International Property Maintenance Code, which mandates that homes be connected to an electricity grid and a running water source. That’s just like saying our dependency on corporations isn’t even a choice. The battle to live without most utilities has been ongoing for Robin, the self-sufficient woman has lived for more than a year and a half using solar energy, a propane camping stove and rain water.

In the end, she was found not guilty of not having a proper sewer or electrical system; but was guilty of not being hooked up to an approved water supply.

So what exactly is off grid living? “It means living independently, mainly living independently of the utility companies. Providing your own power. It does not mean living in the stone age, it’s not about bush craft. It’s about generating your own power, your own water, dealing with your own waste. Probably as part of a community, not living on your own like a hermit. It’s also about being more self-reliant and being less dependent on the system. Perhaps realizing that the system isn’t really protecting us anymore and we have to look after ourselves.” – George Noory

Our potential as a human race is quite extraordinary, we just don’t realize it. Sustainable living is not about giving up a certain lifestyle, can still have all the modern amenities, design and beyond. Living off the grid wouldn’t be a problem, we have technologies that can generate over-unity power, we have technologies that can provide unlimited amounts of clean energy. I’m talking about free energy, which goes far beyond solar energy. We can have neighborhoods exactly like we do today, even better. They would be totally green, off the grid and self-sufficient.

The only problem with off the grid living is that corporations lose their ability to control others. With a completely self-sustaining life style, no body would ever have to work. What would happen then? Think about that for a moment. We would be free to expand and create, to discover our full potential as a race and move forward into the world of exploration and discovery, all the while living in harmony with nature, not against it.

We’ve accepted the monetary system, and deem it necessary for the proper function of society. Money doesn’t ever have to come in the way of necessity, we’ve just been made to believe that it does. It’s time for the human race to move past the concepts of competition and greed into one that benefits the whole.

“One of the saddest lessons of history is this: If we’ve been bamboozled long enough, we tend to reject any evidence of the bamboozle. We’re no longer interested in finding out the truth. The bamboozled has captured us. It’s simply too painful to acknowledge, even to ourselves, that we’ve been taken. Once you give a charlatan power over you, you almost never get it back.” – Carl Sagan

The human race does not need to be dependent on these corporations. While we continue to feed this dependency, the planet continues to suffer. In order to move forward, we must start cooperating with each other, and realize just how much potential we have to create something magical and amazing. Bottom line, anybody who has the desire to live off-grid should not be hassled for it, it should be a free choice.