Before I tell you about the skill set often overlooked by preppers, consider a few questions and comments to prime your thoughts.

This year I’ve been peppered with the message loud and clear from a diversity of sources that it’s more important than ever to be part of a community. That’s because times are only going to get worse, and we each need a support network.

With that in mind, the time seemed right for my wife and I to become involved with a different church where we could both be involved more meaningfully. This has been both rewarding and challenging for me. I’ve had to put into practice a few of the people skills I’d become rusty at in the past several years.

Granted, this church isn’t a prepper community. But it could prove to be an important support network, beneficial for all involved. And that’s no small thing.

Perhaps you’ll recall my visit with Chris Ray a while back on DestinySurvival Radio. (View my post about it here if you need a refresher.) One of the things we discussed was whether it’s preferrable for a Christian to be part of a church or a prepper group when the chips are down. While Chris said he’d rather be in the group of preppers, it’s an issue on which his opinion may change from time to time.

I say all that to say this. One of the most important skill sets you’ll need in any group you’re involved with is people skills. As my dad told me many times when I was growing up, when you’re out in the world, you’re going to rub shoulders with a lot of people, and you’re going to have to learn how to get along with them.

A few days ago in “The survival Weekly Dispatch” newsletter (Vol. 2, Issue 17), Jim Cobb published a piece on people skills, which I thought was so good, I asked him if I could reproduce it here. I do so below with his permission.

You’ll note that Jim has been my DestinySurvival Radio guest a number of times. His commentary is worthy of your attention, and I’d love to know your thoughts.

In the prepper world, we talk a lot about skill sets. Stuff like scratch cooking, food preservation, gardening, marksmanship, hunting, trapping, bushcraft, the list goes on and on. One area that is often overlooked, though, is what we call people skills. Things like active listening, conflict resolution, negotiation, and compromise. Basically, all those skills that prevent us from getting a note on our report card that says, “Does Not Play Well With Others.” 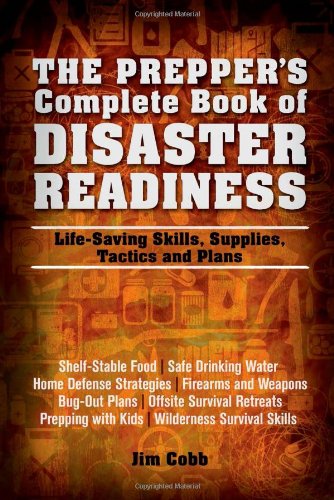 Now, granted, many of us in the prepper/survivalist world tend to be a little…abrasive…at times. That’s our cross to bear for having a healthy degree of common sense in our heads. We often have little patience for things like ignorance and stupidity. But, that doesn’t mean we should treat people any differently than we want to be treated ourselves.

When I talk about people skills, what it all really boils down to is this – treat each other like human beings. We, and by that I mean society in general, tend to forget that. My theory is that at least part of it stems from the disconnect we have today, given that we seem to communicate digitally far more often than we do face to face or even just verbally over the phone. How many times have you looked at an incoming call on your cell and decided not to answer it, instead just waiting for the inevitable text message? How often have you seen teenagers sitting right next to each other and having a conversation via text rather than verbally?

Why does this fall into the realm of prepper skills? Think about it for a second. A disaster and the ensuing aftermath are going to be extremely stressful as it is. Add on interpersonal conflicts within your family or group and blood pressure is going to go through the roof. It is much more difficult to work together as a team when each team members is angry with everyone else. Effective communication will defuse arguments and keep the group working smoothly.

If you feel your own people skills are a little lacking, try this. For one entire week, just work on active listening. This means you need to be present in the conversation and there are two basic components at work. First, you need to pay full attention to whomever is speaking to you. Put away the cell phone, tablet, and all those other distractions. Then, repeat back what was said, using your own words rather than just parroting what was said. Doing this confirms to the other person that you both heard and understood what was said.

Wife: Could you please run to the store and pick up a loaf of bread and some milk, please? We’re out.

Husband: We’re out of bread and milk? Ok, I can go get some. Do we need anything else since I’m going there?

Yes, that’s admittedly a simplistic (and stereotypical) example. The point, though, is that by repeating back what was said, you not only confirm the message but reinforce it in your own head so you’ll remember it better.

We’ll talk more about communication skills in future editions of the newsletter. These skills are important, both in everyday life as well as related to preparedness.