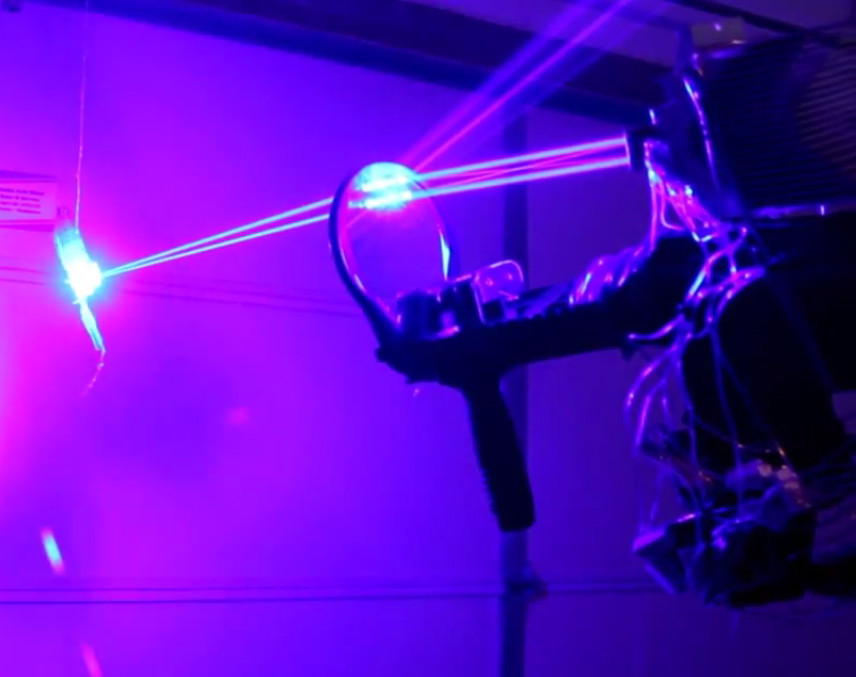 Forget about stocking up on 22lr for your Ruger 10/22 Takedown, or practicing your bow hunting skills.  The future of firearms may be more near than you think.  Imagine a day that you’ll take your  Directed Energy Weapon out to the range to zero in your optics.  Hey kids, “Grab your DEW Rifle and and let’s go hunting”  Here are some early prototypes of what we can expect in the future.

I don’t think this guy knows what a shotgun is. However it is an impressive device. Albeit, it looks slapped together. It looks like he mounted his laser array to an Electric Airsoft M4. The laser array produces 40W of laser. He uses a magnifying lens to focus the eight parallel lasers and concentrate them to a single point at a given distance. He is able to pop balloons and burn things by pulling the trigger. – See more at: TheFirearmBlog

Set Your Phaser to Pop

I have to admit when I first saw this I thought it might have been a bit of a hoax, but a very crafty Star Trek fan using parts from a Blu-ray player and old playmates Phaser toy has made a working (albeit not very powerful) Phaser. While the unit may not be strong enough to seriously injure someone, you could probably give a person a nasty little burn from across the room.

In the video below you can see him use it on some very threatening looking balloons, and make extremely short work of them. I have to say I really want one of my own, oh imagine the fun at children’s birthday parties.

Lockheed Martin has been working on a weapon for years that pops a little more than balloons.  These obviously aren’t very portable yet, but just think about this…..  Computers used to take up entire buildings and now you carry more computational power in your mobile phone then they used sending the first man to the moon.

Soon we’ll all be vaporizing