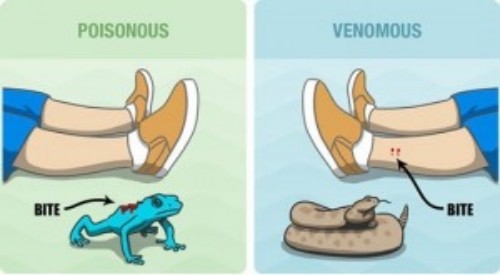 Nature is continuously evolving. Everything around you / me / us is evolving as well. In order to adapt themselves to the environment as good as possible, living things succumbed to the natural order of things. Most organisms today are far from what their ancestors used to be thousands, even millions of years ago. The morphological and structural changes in a living cell happen, when in order to survive, it needs to change itself, to adapt, and (on a larger scale) to ensure the survival of the species. Some even develop the ability to hurt, kill or repulse dangerous factors or potential pray by means of poison or venom (mostly neurotoxins).

I’m sure that most of you, like me, have heard many-a-time while growing up (but not only): DON’T TOUCH THAT! DON’T EAT IT! KEEP AWAY FROM THIS OR THAT! IT WILL: BITE / STING / SCRATCH / POISON / YOU! Many of you (again, like a younger, more naive me) were at some point or another about to commit an act out of ignorance that could have had dire consequences. When outdoors, it’s most important to know what you’re dealing with and what’s about to deal with you. Because sometimes your existence may depend on it.

First thing’s first: what’s POISONOUS and what’s VENOMOUS? That which injects venom in its prey or aggressor through special mechanisms (fangs, stingers etc.) is VENOMOUS. What is going to poison you if you eat it (the blow-fish, the golden poison frog etc.) is POISONOUS.

Most dangerous plants and animals show signs that “they’re packing heat”. In nature, strong bright colors mean KEEP AWAY. The brighter the color, the bigger the danger. Although, in some cases, harmless beings will mimic the patterns or colors as a defense mechanism, without having the ability to secrete deadly substances. The hornet moth (Sesia apiformis) mimics the appearance of hornets, making them look menacing despite the fact that their lack of venomous glands or stingers makes them completely harmless.

Let’s have a look at various representatives of the Animalia regnum and, by comparison, determine what’s to be feared and what’s not.

Spiders have gained the reputation of being biters, and with good reason. For humans, the venom effect from most species can be painful, can cause infection-related complications, and in other cases can be lethal. They inject the poison via fangs called chelicerae that are connected to venomous glands located in the mandible.

The European garden spider (Araneus diadematus) is one of the most common spiders in Europe and North America. He is potentially dangerous for human beings, but never lethal under normal conditions. He’s easily identifiable by a pattern resembling a large cross on his back (abdomen). They’re specialized in spinning orb-webs (circular web patterns).

The jumping spider of North America (Phidippus audax) is a non-venomous spider. Despite having strong, brightly-colored chelicerae, they do not possess venomous sacks. They are easily recognizable by their bright colored pattern of spots and stripes on the abdomen, contrasting with the overall color, black. They can jump over 50 times their own body length. But don’t worry, the best they can do is scare you out of their territory.

Recently determined in 2010 as the world’s most venomous spider, the Brazilian wandering spider (Phoneutria nigriventer) is the most dangerous representative of the Araneae order. It can grow to have a leg spam of maximum 15 cm and body length of 48 mm. Be on the lookout for this cream-colored spider, with several rows of black or red dots on the underside of the abdomen, contrasting mid segments and lighter joints. His defensive posture consists in raising his frontal legs in the air. Do not approach this spider in any way; his bite is 100% lethal!

Snakes are reptilians (order Reptilia, suborder Ophidia) that have lost their limbs throughout the evolutionary course. They have adapted to crawling on the surface thanks to special muscles found on their ventral side, protected by scaly plaques. They are easily identified thanks to their scaly bodies, hissing sounds, and limbless bodies. They too have the reputation of being nasty biters. The snakes with long fangs have the ability to fold them back in their mouth, thanks to hinge-like structures. This prevents the fangs of getting in the way of feeding or crawling. The venom is released from venom sacks that are located in the head, behind the eyes. While most snakes are potentially deadly to humans , some are not.

The rough green snake (Opheodrys aestivus) is a small, harmless snake, that doesn’t poses venom glands. Despite his bright greenish color, it has no real biochemical weapon in his arsenal, their diet consisting mostly in small prey (invertebrates and insects). It can grow to up to 1.7m. It’s easily distinguishable because of the bright green scales and bright yellow sideline, running all the way from the sides of his head to his tail.

The Inland Taipan (Oxyuranus microlepydotus) is the most venomous snake known to man (so far). A single spray can release 110mg of venom. The neurotoxin complex found in this quantity is sufficient to kill 100 people. Its usual length is 1.8 meters, and the color pattern varies from dark brown (on his head) to a litter brown, towards the tail. These snakes are not aggressive, with 0 human casualties on record so far. However, all form of contact with these snakes is strongly unadvised. Just because a snake isn’t venomous, doesn’t mean he’s not dangerous. The members of thePythonidae family lack venomous glands, but are still predators. They have adapted to the predatory life by overcompensating and developing stronger than average muscles. They are big snakes, able to ingurgitate voluminous animals. They kill by constriction, wrapping themselves around the pray and strangulating it. The python (Python molurus molurus) is the most representative species, easily recognizable by his size (3 – 4m on average). He is fully covered in a mosaic-like pattern. To some it may come as a surprise to find frogs amongst some of the deadliest creatures known to men. I can assure you, they’re place in the spot-light is well deserved. While most of these tiny amphibians pose little to no threat to human kind, some of them are more than enough to kill a human ten times over.

Many rumors and myths have circled throughout history around frogs like the Yellow-bellied toad (Bombina variegata), whose scaly and rough skin have classified it in popular culture as an ill omen and bringer of skin afflictions (warts etc.). Despite his monstrous appearance, this creature poses 0 threats to humans. Feel free to kiss away as many toads as you like. You’ll get no prince charming, true. But neither will you get incurable skin diseases! Kissing a golden poison frog (Phyllobates terribilis) however, may result in grave consequences. This tiny member of the Anura order is highly toxic even to the slightest touch. His bright yellow (even green or orange, according to specie) outer coating is a pertinent signal for what’s underneath his epidermis: thousands of glands that secrete (as a defense mechanism) one of the most potent natural toxins ever discovered (LD50). 1mg is more than enough to easily kill 20 – 25 humans. The Embera tribe (Colombia) captured and restrain these frogs in order to deep their hunting arrows in their skin, making them more efficient. The poison can maintain its deadly effect for up to 2.5 years on the arrow’s tip. The first thing to come to mind related to underwater predators is most likely sharp teeth and strong jaws able to tare ones limbs apart. But there are plenty of fish in the sea. And with numbers, comes diversity.

If you happen to stumble across a Red scorpionfish (Scorpaena scrofa) and you get stung by one of its dorsal spines, it could very well be the last thing you’ll ever do. They pack a strong poison capable of rapidly afflicting vital organs. It can result in swelling, fever, vomiting, delirium, fainting and cardiac or respiratory collapse. The Australian bull ray (Mylliobatis australis) is the stingray responsible for one the most covered deaths in modern culture, as in early September 2006 was claiming the life of nature-nut and animal enthusiast, Steve Irwin. Its tail packs a needle capable of injecting a potent toxin that can result in immediate paralysis and death due to heart failure. The patterns on its dorsal side may vary from grey to light beige (with or without patterns), while is ventral side is almost always white. Although most jellyfish are nothing more than gentle roamers of the seas, not to be feared in way, encountering the wrong type and not being able to recognize it may prove fatal. Some jellyfish feed with the help of tentacles cover in thousands of micro-stingers, paralyzing and killing most of the living organism that happen to pass through their deadly wail. The Box jellyfish a.k.a. the Sea Wasp (Carukia Barnesi) has more than enough potency in its sting to put down even the strongest people. When it comes to nature’s children, some will hurt, some will not. Some will scare, some will kill. Know the difference! It’s the only thing standing between you and natural selection.