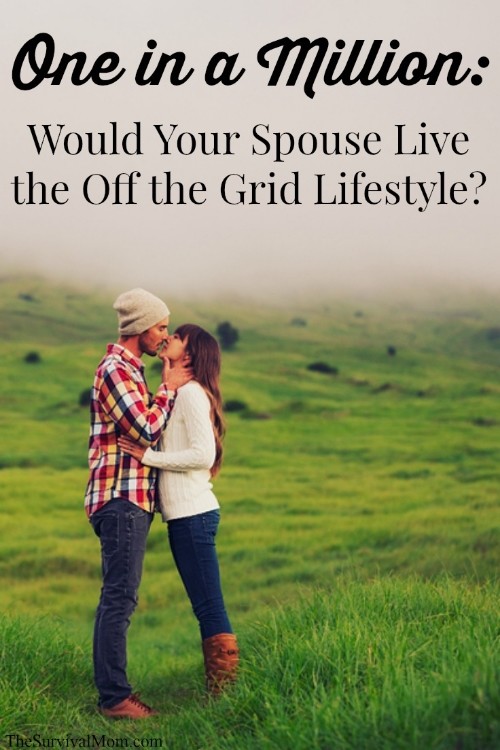 Getting your spouse onboard with prepping can be a huge challenge for the best of us. I know that when I first told my wife that we needed to start prepping, she looked at me like she thought I had been in the sun too long. It was more of a look of pity than anything and I kept expecting her to say “Bless your heart!” (That is southern for you poor fool!). I knew right then that I had my work cut out for me.

I started off by asking a series of questions like when was the last time she watched the world news and did she know what Agenda 21 was? She admitted that she doesn’t like to watch the new because it is to depressing (I knew that but just wanted her to admit it). She said that Agenda 21 is a conspiracy theory I think. At his point, I told her if she could prove that it was, then I would drop the subject and not bother her with it again. I then suggested that she might want to start with the UN website. (That was just too easy!)

A couple of days later she informed me that it was a real Agenda and that she would look further into other things that I talk about. All I needed to do was peak her curiosity a little to get her started looking. She still wasn’t ready to give in just yet however. Over the next couple of months I brought several other items to her attention that she at first thought was just the ramblings of a mad Prepper. In each case I had her research them (She is good at that!) and lo and behold, they were real. She had a hard time believing that our Government would stand by and let things like that happen. Let alone condone it. By this time, she was off and running, I had created a Monster! She was reading everything she could get her hands on ….when she wasn’t playing games on the computer that is.

I guess that the reason that I am telling you this is so you can see that most people who don’t believe in prepping are not stupid, they just haven’t opened their eyes to the truth. It is just easier for people to believe that everything is well and right in the world than to face the truth and know that dark and scary world that we live in. It’s like looking at the Sun, it hurts! Sometimes it may take several fact check items to get them to open their eyes. You just have to be willing to be patient and let them convince their own selves that what you are saying is true. Whatever you do, never say I told you so! IF you do then you will probably lose them and they will not admit you are right no matter what you say. No one likes to be proven wrong, so use that to get them to start looking into things that they normally wouldn’t look into.

You may want to point to the first Amendment and how Washington is creating “Areas” of free speech and how they are now also creating areas where it is not allowed. Then point to the second Amendment and how they are working to make laws to take away our right to keep and bear arms, even though that right is guaranteed to us by the Bill of Rights. Then start asking why she thinks they are working so hard to take them away from us? If she says that guns kill people, then show her the facts and that they are actually one of the least deadly weapons used to commit murders. Get the facts and show them to her or him whichever the case may be.

This may work for you and then again it may not. It all depends on how much they are determined to keep their eyes closed. I know that it has worked for me and many others that have faced the same challenges. If you can ever get them to open their eyes and see what is actually out there then you have a chance. Facing a horrible truth is a scary thing and you must be patient when dealing with them. Do it gently and slowly and soon you will be prepping together. Good luck and remember that prepping is not a destination but a journey and one that should be shared with your spouse.

A word of WARNING: Pick the subject that you want them to look into carefully and be sure that they are true before you have them follow-up on them.

Categories: Advice, Be Prepared, Emergency, How To, News, Survival
Tags: on board, spouse
Leave a Reply Cancel reply