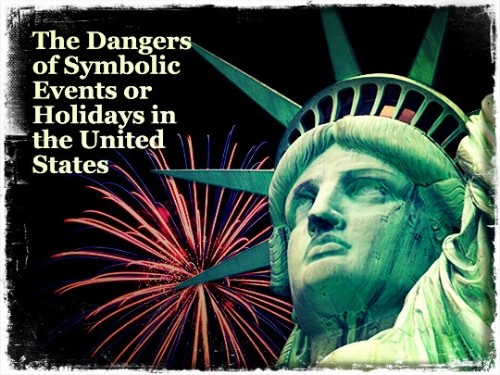 Any gathering of people can be a potential target for someone or some group. This is nothing new however. Attacks at gatherings have happened for centuries, and they will continue to happen.

Mass casualties are the intention, so when people are grouped together it takes less effort and little training to inflict injury and to cause fatalities. Shooting into a crowd of people requires no training to kill a number of people in the crowd. It only requires the mindset needed to pull the trigger.

The definition of terrorism is to use violence and threats to intimidate or to coerce others, particularly for political purposes.

Staying home huddled in fear is not an option. If you are forced to change, because of a threat or a perceived threat then you have been coerced, and you now have lost a certain amount of freedom, but then again survival is the objective.

The so-called lone wolf attack is the hardest one to guard against, because a person can have intentions that are not disclosed or obvious to anyone, and if they are, it is usually to sympathizers that only encourage the behavior and not deter it. In some cases, there is no trail to pick up, so to speak. This person can show up at any event with a firearm concealed on their person and open fire. They can use a vehicle as a weapon or use explosives.

You have all heard the term, but how many of you practice it. Early humans literally had to guard against predators lurking at the entrances of their shelters. A foraging expedition or a trip to the river for water was fraught with dangers from other humans and four legged predators. Humans for centuries were conditioned to scan the trees, the darkened woods and to check the shadows for danger. A weapon was always at hand, and no one became so engrossed in his or her tasks that they did not look up continually to check their surroundings. They knew which way to bolt if the chance presented itself and if not they stood and met the threat head on. They had a plan.

If you hear gunshots do you run toward them or away from them? If you do not have a weapon and are not trained to counter an attack then you run from the sound of gunfire, otherwise you may lose your life. You literally herd your friends and family away from the sounds. You need to know where the exits are, what objects can offer cover (protection from rounds), and you need to know what can conceal you from an attackers’ view. Cover and conceal. You need to always look for avenues of escape no matter where you are.

Do you know what a gunshot sounds like, or will you confuse it with fireworks, it would be easy to pass off explosions and loud bangs as fireworks. Stay out of the middle of the crowd and if you hear what may be gunshots look for people running, and if the crowd begins to move or panic then you have to move quickly, more quickly than the crowd.

You should never let yourself get caught in the middle of any crowd. Once an attack starts those around you will panic and impeded your movements, and in some cases, if you fall you could be trampled to death. People trapped in a burning building will pile up at blocked exits and can suffocate or trample people around them. Crowds are dangerous for this very reason. They impeded your escape and they can kill you.

Alcohol makes you an easy target and when celebrating in public when there is a large gathering you need your wits for any number of reasons. Becoming drunk in public makes you a target for literally anyone, because you may think you can deter someone but you cannot.

Soft targets are typically those not guarded well or at all, and so they make easy targets. Attackers do not want to be fired upon. They do not want anything to slow or to stop their carnage, so they will choose targets that they suspect or know will not be guarded well, such as malls, outdoor markets, parades, parties, and any gathering in a public place.

If you have to leave in a hurry do you know which way to go and if the first avenue is blocked do you have an alternative route mapped in your head. This is the world we all live in today, and we all have to pay attention to what is happening in our immediate area, and around the world so we can do threat assessments.

Enjoy life, enjoy celebrations, but always have an eye to the trees, to the shadows and always have an escape route mapped out in your head. Consider the “what ifs” at all times.