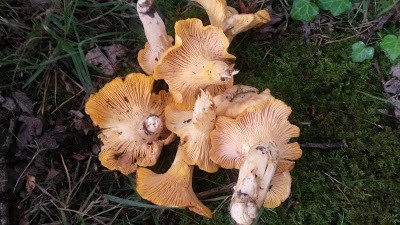 It’s a great time to find one of the nicest types of fungi out there, relatively easy to identify and tasty to boot. Chanterelles. they are easy to i.d. with their egg yolk yellow colour and a very mild, slightly sweet smell but the false gills, looking more like folds or wrinkles than traditional mushroom gills, are a give away as to the fact you’ve found a chanterelle, (though just exactly what sub species of chanterelle is a different matter!) I’m not one for fancy recipes, preferring to actually taste the mushroom itself rather than a whole mishmash, so make a skewer, slice the ‘shroom, impale it and roast it over the fire, it starts to release it’s juices quickly and once slightly crisp just eat.. one mushroom that tends to have a few more calories than most fungi, but to be honest as a survival food, you’re not going to get a huge amount of calories from fungi.