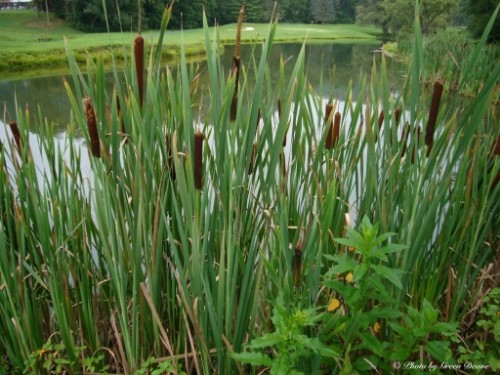 No green plant produces more edible starch per acre than the Cat O’ Nine Tails; not potatoes, rice, taros or yams. Plans were underway to feed American soldiers with that starch when WWII stopped. Lichen, not a green plant, might produce more carbs per acre. One acre of cattails can produce 6,475 pounds of flour per year on average (Harrington 1972). Two species of cattails are common in North America today. One is Typha latifolia (TYE-fuh   lat-ih-FOH-lee-uh)  the otherTypha angustifolia (an-gus-tee-FOH-lee-uh.)Typha is from Greek and means “marsh” — now you how “typhoid” got its name and Typhoid Mary.Latifolia mean wide leaf,angustifolia means skinny leaf.  Besides that difference, the T. latifolialikes shallower water, theT. angustifolia deeper water, but it is not unusual to find them living side by side and also crossbreeding —L’angustifolia perhaps. Cattails get their name from their mature brown cylindrical flower spikes. When I was a kid we used to used the dried spikes as torches while skating in the winter time. The end of season fluffy “tails” make excellent tinder and the Indians used them insulation, mattresses and absorption.

There is so much to know about cattails that a book could be written just about them. First, no other plants in their mature stage look like the cattail, so it is difficult to misidentify. Younger plants can be misidentified with three toxic ones so always look for last year’s classic growth to confirm you have found cattails. Cattail are oval at the base, not flatish. They are also very mild tasting and without much aroma meaning if what you think you’ve got is a cattail and it is strongly flavored and or aromatic — not counting the smell of mud — you’ve got the wrong plant. It is said that if a lost person has found cattails, they have four of the five things they need to survive: Water, food, shelter and a source of fuel for heat—the dry old stalks. The one item missing is companionship.  Of course, the other thing to point out is that no matter where the water flows, down stream is civilization in North, Central and South America. Remember that when you are lost in the Americas. This does not hold true in Africa or Siberia. Many rivers in Africa are largest near their source then dry up as the water is used or evaporates. In Siberia rivers flow north towards the uninhabited arctic.

One Boy Scout motto is “You name it and we’ll make it from cattails!” Cattails are the supermarket of the wilds. The young cob-like tips of the plant are edible as is the white bottom of the stalk, spurs off the main roots and spaghetti like rootlets off the main roots. They have vitamins A, B, and C, potassium and phosphorus. The pollen can be used like flour.  I like their convenience as a trail nibble, or canoe nibble as it were. Just pull on one and where it pulls from the stalk there’s usually a tasty bite or two. I think the best part, though, are the new shoots off the main root. They’re start out looking like an alligator’s tooth then a pointed hook three or four inches long. The roots themselves need some processing and I’ll get to them in a moment.

Cattails have a surprising function and history. The spread of cattails in a body of water is an important part of the process of open water being converted to marsh then dry land. They are native to both North America and Europe. In Europe cattails are called bulrushes or greater reed mace. They’re first mentioned — meaning mentioned in writing — in the United States in the 1830s and at that time were only found along the Atlantic seaboard and the Gulf of Mexico excluding Texas. They weren’t even reported in places like Wisconsin until after World War I. They weren’t a significant plant in the Dakotas until the 1960s. The native cattail, Typha gracilis, seems to have all but disappeared, hybridizing with the European version to form the two species mentioned here. Eastern Indians used cattails extensively, not only for food, but for hemp and stuffing. In fact, one Indian word for cattails means “fruit for papoose’s bed.” The fluff was used in diapers and for menstruation.

Like most aquatic plants in the area the cattail is also home to a beetle grub that fish like. On a green cattail look for aon outer leaf that is go brown at the bottom of the leaf and main stalk. You will find a grub, actually the larval form of an Arrowhead Beetle, of the Listronotus genus. The size will vary but they do grow big enough for a small hook and fish love them. As a weevil the grub is also probably edible by humans but I haven’t got around to trying one. You can find the same grub in the tops of bulrushes and wapato.

As mentioned earlier, cattails are the champion of starch production. The way you get the starch is to clean the exterior of the roots and then crush them in clean water and let them sit. The starch settles to the bottom then one pours off the water.  It may take several drain and settle sessions get rid of the fiber. I sampled the starch raw once and got a bit of a stomach ache.  Once you have just the starch it is excellent for cooking as you would any flour. Getting starch that way is quite labor intensive. Here are three other ways to get to the root starch:

Dry the peeled roots (peel roots while they are wet–they are difficult to peel when dry). Chop roots into small pieces, and then pound them wtih a little water. When the long fibers are removed, the resultant goup powder can be dried and used as flour.   The roots also can be boiled like potatoes then the starch chewed out (spitting away the fibers) or you can also roast the root in a fire until the outer spongy core is completely black. Then chew the starch off of the fiber.  Don’t eat the fiber. It will give you a stomach ache. I know from personal experience. The advantage of the latter method is no pots or pans are needed. If you have fire and a pond you have a nutritious meal.  You can also put the roots on the barbecue.

Lastly, cattails, Typha latifolia, is suspeced in the fatal poisoning of several horses in Indiana, one case over 80 years ago. Symptoms included stiffness, disinclination to move, profuse perspiration, and muscular trembling.

IDENTIFICATION: Cattails grow to 9 feet; leaves are strap-like, stiff, spongy inside, rounded on back, sheathed together at base to appear “flattened” but oval; the cigar-looking “blossom” is very densely packed with tiny flowers, male flowers in top cluster, female flowers in bottom cluster. Roots grow horizontally. If there is a gap between the male and female parts of the plant it is T. angustifolia, or the narrow leaf cattail. If the male and female parts of the plant meet, it is T. latifolia, the common cattail.

TIME OF YEAR: Spikes, pollen and flowers in the spring, bottoms of stalks and root year best in fall and spring.

ENVIRONMENT: Grows where it is wet, rivers, ponds, ditches, lakes, close to shore or farther out.

Take two cups of chpooed cattail tops and put them into a bowl with two beaten eggs, one-half cup melted butter, one-half teaspoon each sugar and nutmeg and black pepper. Blend well and add slowly one cup of scalded milk to the cattail mixture and blended. Pour the mixture into a greased casserole and top with grated Swiss cheese —optional — and add a dab of butter. Bake 275 degrees for 30 minutes.

The green bloom spikes turn a bright yellow as they become covered with pollen. Put a large plastic bag over the head (or tail) and shake. The pollen is very fine, resembling a curry-colored talc powder. Pancakes, muffins and cookies are excellent by substituting pollen for the wheat flour in any recipe. Cattail Pollen Biscuits: Mix a quarter cup of cattail pollen, one and three-quarters cup of flour, three teaspoons baking powder, one teaspoon salt, four tablespoons shortening, and three quarters a cup of milk. Bake, after cutting out biscuits, in 425-degree oven for 20 minutes. For an even more golden tone, you may add an additional quarter cup of pollen.