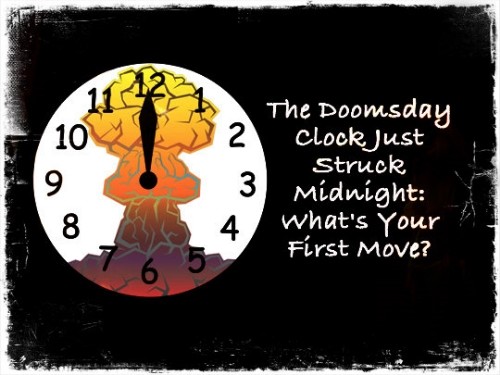 Mostly today, the word is used to define a catastrophe that would change the world, as we know it, change, and never be the same again, so the clock strikes midnight. Are you ready, and if you are decisions must be made, and your survival hinges on those decisions. If you are not ready, then assumedly, you will not live long enough to make any first moves.

1. Do a Medical Check and Render Aid If Needed

Is anyone in the group or family injured? Assess quickly, because injuries can influence all of your decisions from this point forward. Some injured people cannot be moved, and if you had planned to bug-out or feel the need to evacuate, then injuries change the plans. Go to plan “B”, you do have a plan B right?

2. Is Everyone Accounted For

If not, do you have the means to contact them if the grid is down, or for whatever reason the power is disrupted? Is there a staging area, and it does require prior planning. You cannot meet up if there is not a pre-designated area in which to meet. Disasters will occur while people are at work, at school and simply when they are out and about. You need to plan for this.

3. Do I Stay or Do I Go: Good Intel Is Important

The title may be misleading. Once disaster strikes, you usually do not make any moves until you have gathered some intelligence. Rushing headlong into the dark night may create a crisis in and of itself. In other words, do not panic, and then make impulsive decisions until you know what the situation is.

This is where good intelligence gathering skills come into play. There is passive gathering, which is ongoing before the crisis and then active gathering once in the midst of a crisis. The information gathered daily is used to piece together what brought the situation to a head and then you need real time Intel as the disaster unfolds. As stated earlier, communications are important, scanners, Ham radios, two-way radios and person-to-person encounters are just a few Intel gathering methods.

First, you have to know if there is an imminent threat or if there could be. Was there a nuclear, chemical, or biological attack, or are there suicide bombers setting off their explosive vests in various locations. A nuclear, chemical, or biological attack close to your home requires an immediate response by you. You have to either evacuate or get into a protective posture, which would be a bunker or protective clothing and respirators.

You should have a plan for securing your home because now is not the time to wonder about security. You would need to know your battle space, the space where you would have to engage those wishing you and yours harm. You would need to know who walks the perimeter and who stays inside the shelter. This requires planning and practice drills, so everyone knows to go to his or her battle stations if you will, once disaster strikes.

5. Everyone Shoulders Their Bug-Out Bags

You may not have to move, but you have to be ready to move. Everyone needs their own bug-out-bag, or go-bag, action bag or call it what you will, so if someone gets separated they have the means to survive alone.

Everyone must be ready to move to a rallying point, or to evacuate to a bug-out-location, emergency shelters or to some other safe structure. You must always have shelter in mind whether it is your current one or an alternative one.

If you haven’t already, then cache some supplies on your property, so if the home is destroyed, or overrun you can resupply. Assign this task, while others stay on guard. Ideally, you would have supplies already cached, but it is better late than never. The thing about plans is that most of them do not work as intended once the action starts, so you have to adapt on the fly.

Establish contact with neighbors, and others, because they may have information you do not have, and they may have certain skill sets that you can use. Previous articles have talked about the need to network somewhat, so you know who is living next door or in the immediate area, such as doctors, carpenters, retired police or military personnel and others that may have critical skills.

If you haven’t figured it out already planning is important and the above are just a few of the things that have to be done before anything else and Intel gathering, for example, must be ongoing so you have the information at hand to make decisions as to your next move.