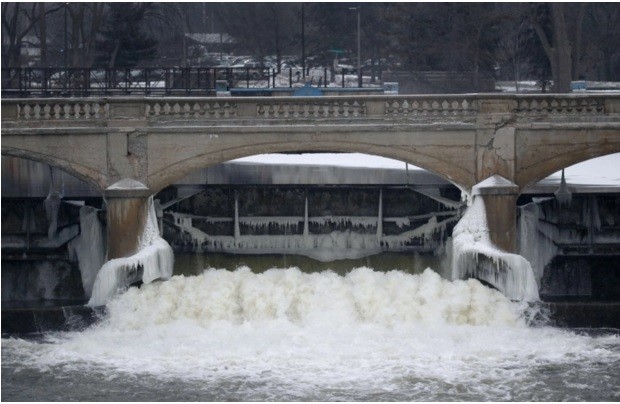 In this Jan. 21, 2016 photo, the Flint River is shown near downtown Flint, Mich. Flint’s water became contaminated with lead when the city switched from the Detroit municipal system and began drawing from the Flint River in April 2014 to save the financially struggling city money. (AP Photo/Paul Sancya)

As national attention focuses on Flint, Mich. — where lead-contaminated water flowed for over a year to a relatively poor, minority community — new research suggests that across the U.S., communities like these are more likely to be exposed to some of the most intense pollution.

In a new paper just out in the open-access journal Environmental Research Letters, sociologist Mary Collins of the State University of New York College of Environmental Science and Forestry and two colleagues from the National Socio-Environmental Synthesis Center and the University of Maryland examined what they term “hyper-polluters”: Industrial facilities that, based on EPA data, generate disproportionately large amounts of air pollution. Then, they cross-referenced the location of these facilities with socio-demographic data from the 2000 census.

The study adds to a body of evidence showing that the U.S. continues to struggle when it comes to “environmental justice,” a concept advanced by advocates and researchers to describe the reality that poor and minority communities tend to have disproportionate exposures to environmental hazards.

[How cases like Flint destroy public trust in science]

The industrial emissions examined in the new study were reported by close to 16,000 industrial facilities in the continental U.S. as part of the EPA’s toxics release inventory program. The facilities were across a variety of sectors, ranging from mining to manufacturing, according to Collins. They did not include large power plants.

Examining this EPA data, the study found a significant disparity when it comes to how much different facilities pollute. “90% of toxic concentration present in the study area is generated by only 809 (about 5%) of facilities,” the paper reported.

The water emergency in Flint, Mich., is two years in the making. Here are the people who’ve played a key role in the crisis. (Claritza Jimenez/The Washington Post)

But what was particularly striking was cross-referencing this information with socio-economic data on the people living around the facilities, based on a nationally representative sampling of Census information. The highest polluting facilities were also more likely to be located in proximity to poor and minority neighborhoods.

“It’s certainly not news that minority and low income communities face more than what some would say is their fair share of pollution from industrial sources,” says Collins. “We found that actually, the burden they face from these superpolluters was even more extreme than you would think.”

The work is an advance in the environmental justice field, using big data approaches to underscore a familiar conclusion in a new way, says Andrew Jorgenson, an environmental sociology professor at Boston College who was not involved in the study.

“The substantive argument is something that’s been around a long time, but this is a very sort of sophisticated, methodologically rigorous, and far reaching analysis that provides some generalizable analysis of this occurring across different regions,” Jorgenson says.

“This study is different because it’s looking at the largest polluters, and really focusing in on sort of the most egregious releases of chemical pollution,” says Sacoby Wilson, an environmental health professor at the University of Maryland-College Park who was familiar with the study. “And so what it basically is saying is, you don’t have to look at all the different facilities, if you just look at the superpolluters, the ones that release the most chemical emissions, we see that those facilities are also located in communities of color and poor communities.”

Wilson said that because of this, the new research could help EPA engage in targeted, voluntary programs to help these facilities lessen their emissions, and get a bigger impact than might happen by trying to work industry-wide or nationwide.

The immediate problem in Flint wasn’t about air pollution of the type involved in this study. Rather, it turned on a decision to switch the city’s water supply from Detroit’s to the Flint River to reduce costs. Still, it’s relevant, say Wilson and Jorgenson. “Flint falls into this broad category, a community that is sort of structurally disadvantaged,” Jorgenson says.