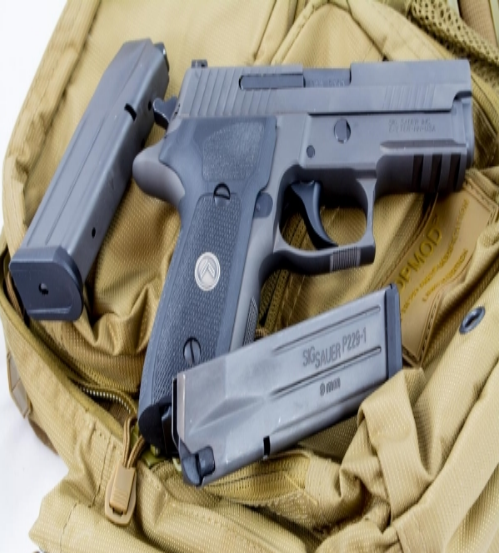 While “Carrying for Terrorism” sounds like a Sally Struthers TV infomercial cause, it’s becoming a legitimate self-defense topic worthy of a rational consideration.

Let’s get one thing out the way first. The odds of you getting caught up in a domestic terror attack are pretty darn low. Yes, terrorism is now here on our shores. Actually, unless you work for the New York Times, you already know that it’s been here for decades. Yes, I fully expect there will be more attacks like the recent one in San Bernardino. Our enemies are persistent if nothing else and there is no reason to believe that they’ll take up a scrapbooking instead of decapitation if we promise to reduce the exhaust levels of Ford F-150s.

Nonetheless, the odds of your home catching fire are pretty low too, yet a prudent person keeps a fire extinguisher near the kitchen. The bottom line is that there is nothing wrong with observing reality and taking rational and prudent measures to increase the odds of successfully protecting your family.

But what about the arguments that concealed carry can’t have any meaningful impact on a terrorist attack?

Come on! A concealed carrier citizen isn’t going to be able to stop a terrorist attack!

Listening to this type of argument makes me crazy, because the people making these statements generally know nothing about the topic of self-defense. I saw a meme the other day illustrating a van full of SWAT team members armed to the teeth. The caption read something like “It took 23 men like this to stop the San Bernardino killers. What makes you think an average citizen with a CCW will be successful?” That misses the entire point.

Take your brain to the very ugly scene of a mass shooting. By its very definition, a mass shooting is unopposed – by design. Virtually all of them have taken place in a legal “Gun Free Zone” where the perpetrators knew that they would be completely unopposed for 10, 20 or even 30 minutes. Now imagine how that went down. Picture innocent people sitting or kneeling, with their hands up, waiting their turn to be killed, completely at the discretion of the killer. There is no scenario worse that that. None. A concealed carrier drawing his or her gun and getting killed anyway is not worse than that. Even that’s better as it slowed down the process of others being executed.

What stops this methodical and orderly killing? Disruption. It’s as simple as that. With any resistance, whether successful or not, the painstaking killing plan of the murderers is suddenly shifted into reaction mode. They are no longer the complete master of every second in the timeline.

In the recent Umpqua Community College shooting, the perpetrators plan was disrupted by the actions of unarmed Army veteran Chris Mintz. Mintz ran towards the danger, getting students in the library to safety before arriving at the room where the shooter was present. After yelling to people outside to call the police, Mintz was confronted by the gunman. Efforts by Mints to talk the gunman down failed, and Mintz was shot five times. Thankfully, he survived. Shortly after, the gunman killed himself when police started to close in. We’ll never know exactly how many lives that simple act of disruption saved, but it was a lot. People got away while Mintz distracted the gunman from his slow and methodical killing spree for a period of time.

Another example is the Clackamas Mall shooting, which happened just before Sandy Hook. A gunman armed with a rifle and over 150 rounds of ammunition went into Clackamas Mall and started shooting. He managed to shoot two people before he was confronted by concealed carrier Nick Meli. Meli aimed his gun at the gunman, who then ran into a stairwell and took his own life. Meli never even fired because he was worried about bystanders behind the gunman. That’s right, whether Meli’s handgun was a match for a semi-automatic rifle was irrelevant in this case. The killer’s complete ownership of the situation was disrupted and his plan foiled. Action and disruption means everything.

One more factor to consider is that the range of these attacks is almost always frightening close. Even if the murderer is using a rifle, the range of shooting is typically measured in inches or feet. In a crowd of people waiting to be executed at will, would a person or two in the mix with a handgun be able to inflict damage on the attackers? Would they be able to provide a few seconds of critical disruption? You tell me.

So what’s the rational course of action? I would hope that you’ve read the owners manual on your fire extinguisher, so you know how to work it. Learning its operation as a stove fire consumes the dishwasher is no time to figure that out. If you choose to use a gun for protection, that concept is far more important. In a home fire, your lack of preparation can result in the loss of your home. In an active gun use scenario, we’re talking about immediate life and death consequences.

A few years ago, while terrorism was a real threat, most people planned their defensive strategies and equipment around the more likely scenario of a criminal attack. In those scenarios, small revolvers, and lower capacity pistols are perfectly rational solutions. Reviews of defensive firearm use encounters show that the vast majority of gun uses involve no shots fired. In the cases where triggers are actually pulled, a relatively small number of shots usually ends the attack. Should these types of planned and deliberate murder attacks increase in frequency, and I think they will, you’ll want more rounds. It’s as simple as that. Many folks, me included, are finding that they feel a little better carrying a gun with 15 or more round capacity and an extra magazine or two. I’m not telling you that’s the only proper response; I’m telling you that I feel more comfortable these days carrying a gun with 15 or more rounds.

If you choose to carry a gun, first and foremost, get training. We’re blessed with a myriad of self-defense live training options all over the country. As long as you do your homework, you should be able to find a good one near you. Worst case, watch and study reputable video training programs. Then put those strategies to work on the practice range. If your range doesn’t let you draw or shoot and move, then do it at home with a squirt gun. Only after you’ve made a commitment to training and practice should you think about whether it makes sense for you to upgrade your carry gun capacity.