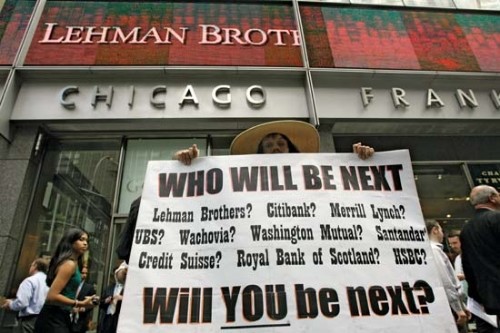 Many people are talking about a financial collapse these days; not just preppers, however the population in general. We hear from billionaire investors, economists, politicians and average folks on the street that the economy can’t handle much more, before going over the edge.

If you look at past financial collapses, there are many signs that we have one coming. In fact, according to some of those signs, we’re overdue for it. Apparently something is still holding up the U.S. economy and if that “thing” ever gets removed, we’re going to be on a fast elevator ride, heading for the financial basement.

There’s no way of knowing precisely when this monetary collapse is going to come, however we can be pretty sure that it’ll come. The actual timing depends upon several factors, with some people attempting to make it happen and others attempting to stop it from happening. Part of the matter is that different folks disagree on what will ultimately cause it, with totally different schools of economic theory claiming that the restorative measures of another theory being exactly what will put us over the edge.

One issue is evident, the economy can’t continue going as it is, without some type of negative consequences. Government spending is out of control; banks and the stock market are being pampered by national policy; the government is lying to us regarding the financial figures it releases; and less folks are working today than have been working anytime in living memory.

Without getting in a lot of detail regarding how financial collapses happen and the intricate money maneuvering that is a part of it, there are two basic signs we need to be searching for. The first is a rise in unemployment; not the figure the government is handing out, which shows unemployment dropping, however real unemployment. During The Great Depression, actual unemployment was at about twenty five percent.

The other sign is runaway inflation. Once again, the govt is lying to us regarding the inflation rate. They’ve been saying that we have had an average 1.5% inflation rate for the last five years. However, this is leaving out anything that’s rising at a higher rate, specifically food and energy. While gas costs have dropped recently, that’s a temporary situation, brought about by a price war that the Saudis are running to regain dominance in oil production.

Actual inflation has been regarding eight percent per year. While that isn’t enough by any means to make a financial collapse, it’s undoubtedly worse than the 1.5% the government has been telling us. In the Argentinean collapse, they’d over 1,500% inflation in 2 years! There was one month in which inflation hit two hundredth percent.

Investing to Survive the Collapse

Between high unemployment and high inflation, the idea of “investing” could seem a little crazy. After all, we’re going to need money to survive on, so setting it aside in investments seems like a waste of money that’s needed for different things. But the fact is that investing your money wisely might be what makes it possible for you to survive the collapse, when others are suffering.

I hope you understand that I’m not talking about typical investment here. This isn’t buying stocks, putting cash into real estate or maybe investing in a municipal fund. No, this is investing in your future, in ways that a financial collapse won’t damage, but indeed will increase your chances of survival. In some cases, it’d even make it possible for you to profit somewhat by the collapse.

When the collapse ends, regarding the only issue that will retain real value is precious metals. So, if you hold onto it through the collapse and into the recovery, the actual value of those precious metals will be as if you had control onto the money, but adjusted for inflation. If inflation goes up 1,000 percent, the value of gold and silver can go up at least that much.

Speaking of paying off your home, if you can pay off your home before the collapse, you won’t have to worry regarding having your home taken away from you during the collapse. During both The Great Depression and the Argentinean collapse, several lost their homes when they couldn’t make payments. If yours is paid off, that can’t happen to you.

Food and other Essential Supplies

Personally, this is what I consider to be the simplest possible investment. Food always goes up in value. I mentioned at the beginning of this article that food has gone up eight percent each year over the last several years. Well, if you had taken money out of the bank and bought food with it five years ago, that investment would have increased in value a lot of quicker than the interest the bank is paying you. It would have been a much better investment.

I understand that investing in food doesn’t seem much like an investment. That’s really just because we’re not used to thinking of it that manner. However, the results show it to be a very effective investment. That’s what matters.

When the collapse happens, folks won’t be ready to replace things that stop working. They won’t be buying new cars, new lawn mowers or new toasters. Instead, they’ll try to repair what they have or they’ll do without. being able to repair anything will create a chance for business, in a time when others are losing their jobs.

In addition to the tools and training for the business, put in as good a stock of common repair parts as you can. The cost of those components will skyrocket and in some cases they will no longer be available. Any parts you buy today will be ready to be sold at the inflated prices, making them a good investment.

When financial systems collapse, it’s common for people to return to bartering; either individually or in tiny groups. Anything that you need to survive will be helpful as trade goods as well. Folks will be willing to trade what they have, for what you have.

During WW II, several farmers in occupied Europe became wealthy through barter. The people from the town would go out to the farms, “visiting family,” with their suitcases packed full of silver and different valuables. Farmers were glad to trade hams, cheese, salami and butter for these valuable items. when the war was over and things returned to normal, those farmers were ready to sell off their acquisitions for a good profit.