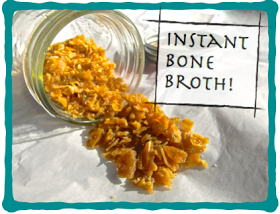 Our ancestors have been making instant, travel ready meals in various forms from jerky or pemmican to powdered grains and vegetables for thousands of years. In the last 500 or so years portable soup, known previously as “veal glew”, “cake soup”, “broth cakes”, “solid soop”, “portmanteau pottage”, “pocket soup”, “carry soup”, “soop always in readiness”, and “glue-broth”, has been gaining popularity. The modern equivalent, bouillon, while flavorful, is a far cry from the life sustaining and convenient portable soup of yore. Traditionally, it is made from bone broth boiled down until thick and gelatinous and then dehydrated. To make your own portable soup, see the recipe I provided in yesterday’s post “How to Make Simple Nourishing Bone Broth”. You can also learn about why bone broth is amazingly healthy and why I love it here.

While some valued portable soup for its flavor, the vast majority preferred it for its high nutrient value, lightweight nature, and convenience of cooking. And who can disagree when 1/2 cup of it weighs just a couple of oz and makes over a gallon of bone broth in just minutes? In the 17th- 19th centuries portable soup was highly popular among soldiers, travelers, explorers of distant lands, woodsmen, housewives, and sailors. So popular in fact that many famous explorers brought large quantities of it with them. In 1804 Lewis and Clark went over budget to spend $189.50 for 193 lbs of the stuff, more than they spent on instruments, arms, or ammunition. Captain Cook brought 1,000 lbs of it on the Endeavor for his 1772 voyage to Australia. He was said to be a fan because they “enable us to make several nourishing and wholesome messes and was the means of making the people eat a greater quantity of vegetables than they would otherwise have done”. Although, the people apparently  did not like eating their vegetables because it is reported that Cook flogged any who refused to eat it.
William Byrd II, the founder of Richmond, Virginia, described it as “a wholesome kind of food, of very small weight, and very great nourishment, that will secure them from starving, in case they should be so unlucky as to meet with no game” and suggested that “should you be fainting with fasting or fatigue, let a small piece of this glue melt in your mouth, and you will find yourself surprisingly refreshed”. Even the Scottish poet Robert Burns describes hunters carrying portable soup in their packs.

Portable soup was not just for wars and expeditions, though, it was also a common household staple, prized for its convenience, ease of preservation, and its ability to nourish the ailing. From the 1694 book recipe “To Make Veal Glue” from The Receipt Book of Mrs Anne Blencow to Hannah Glasse’s 1747 cookbook The Art of Cookery Plain and Easy to the 1743 Lady’s Companion, portable soup was featured in many cookbooks of the era. In 1837 Eliza Leslie advised in her Directions for Cookery, “If you have any friends going the overland journey to the Pacific, a box of portable soup may be the most useful present to them”.

Portable soup became commercially available in 1840 when Justus von Leibig, a german chemist, developed “beef extract” to feed the “craving multitudes”. Spoiler alert, like a beauty pageant queen von Leibig did not solve wold hunger. Von Leibig did feed Henry Morton Stanley on his search through Africa for Dr. David Livingstone, nourished arctic explores such as Nansen, Amundsen, Shackleton, and Scott, and fed Allied soldiers during WWI. It was later marketed to housewives as Oxo.

Although portable soup has sadly morphed into the artificial, MSG filled bouillon of today, the good news is that you can make it yourself with a couple pounds of bones and a lot of time. You can dissolve a teaspoon in a cup of boiling water for a quick snack, use as broth in soup, beans, or rice, add to salads instead of bacon bits, or mix in with pasta or fried rice for an extra kick of flavor and nutrients. Again, you can see how I made portable soup in yesterday’s post “How to Make Simple Nourishing Bone Broth”.
For over 300 more pages on bone broth and portable soup, I highly recommend that you check out Sally Fallon’s new bookNourishing Broth: An Old-Fashioned Remedy for the Modern World (not a sponsor, I just love this book so much).

This much portable soup will make a gallon of bone broth!! Disclaimer: This blog is just my own opinion, nothing more. While I try my hardest, everything may not be completly accurate or complete. Sorry, I’m only human, so do not hold me accountable for anything you do to harm yourself or the world around you. I do make money from this blog (seriously not very much at all guys). If you click on any of the links in my blog I may make money from it. I’m not sponsored by any of these people I just honestly love these products and want to give you the resources to find them.