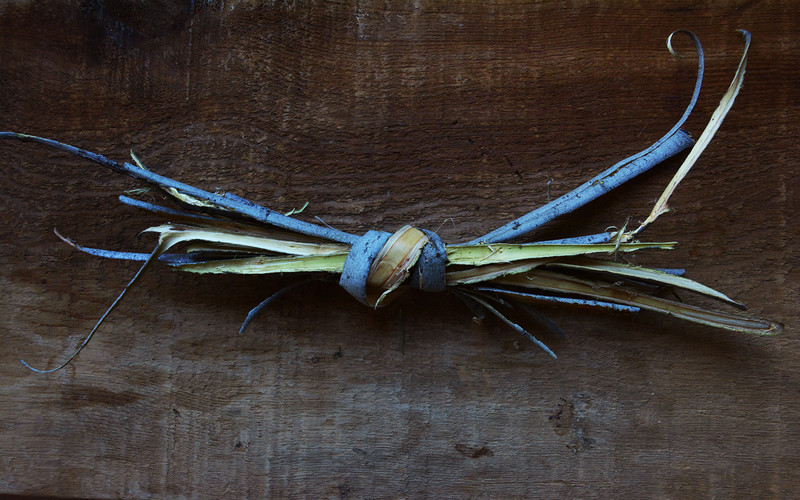 Trees provide us with lots to eat―all kinds of nuts, fruits, and berries, not to mention maple syrup. But what about the other stuff: can we eat the trees themselves?

It turns out we sure can. While trees should not be your go-to forager’s fare (in fact, they’re more of a famine food), their different parts can be repurposed into all kinds of nibbles, often venturing into the gourmet.

We chatted with several dedicated foragers to get the inside scoop on how best to eat trees. Here’s a guide to what we found: the edible parts of trees.

Sassafras roots and bark are used to make different teas and beer. (Photo: The 3 Foragers)

Cambium
Cambium is the layer of inner bark between the hard wood and the rough, papery outer bark: it’s a soft, moist, paler layer, the part of the trunk that is actively growing. It’s nutrient rich, and if you taste it, can actually be sweet, though the taste can vary a lot from tree to tree. The cambium of hundreds of trees―most, in fact―is edible, and can be harvested throughout all four seasons.

If you’re desperate, or just curious, you can try chewing it, kind of like gum. More palatable, perhaps, is if you shred cambium into strips and boil it, to soften the texture and taste, or turn it into chips or bark jerky by frying it in oil or butter. Dry roasting can create an almost crouton-like salad topping. However, it’s most commonly (and historically) repurposed as a flour: dried and then pounded into a powder, which can then be used in breads and baking, and added to other flours.

But you won’t last long on cambium alone, and if you eat too much of it, you’ll definitely upset your bowels. Naturalist and self-declared “Wildman” Steve Brill says that if you’re trying to survive on cambium, you have no idea what you’re doing.

Just pluck it off and pop it in your mouth. (Photo: The 3 Foragers)

Spruce Tips
Delivering a strong taste of pine and citrus, spruce tips are easy to gather and currently in season. You’ll find them on evergreens, such as the spruce and pine, as the trees are growing their new needles for the year. Those small, young, soft bits at the end of branches―a lighter color than the matured needles―are fully edible, and tender enough to just eat them on the spot. Karen Monger, who runs a website devoted to family foraging, says that her kids like to chew them plain.

You can also candy them, or use them to infuse a sugar or salt by mashing them with mortar and pestle; adding a cupful of spruce tips while baking scones or shortbread adds a really interesting flavor, says Debbie Naha, a naturalist and nutritionist who specializes in wild edible plants.

Though spruce tips are only available in spring, pine needles are perennial, and you can give the needles of the white pine a quick chop and simmer to make tea, which Naha notes is a good source of Vitamin C.

Alder bark can be used as a bittering agent for primitive beer and also to provide a reddish color. (Photo: Pascal Baudar)

Outer bark
While today, bark is not seen as a viable or appealing food source, you might be surprised to know that the name “Adirondack”―best known for the mountain range, but also the name of a Native American tribe―derives from the Mohawk Indian word atirú:taks, which actually means “tree eaters.” It appears to have been aderogatory term used on neighboring Algonquian tribes who would resort to buds and bark when food was scarce.

Bark flour has made numerous cameos as an emergency food; for example, during World War I, there’s evidence of ground birch bark being added to enhance rations. During World War II, since flour was expensive, wood chip powder was regularly used as a filler.

The bark of the black birch has strongly wintergreen-flavored inner bark and twigs, that can be made into birch beer, used to flavor drinks and desserts. (Photo: The 3 Foragers)

Sassafras bark and root are used to make the traditional Southern tea, as well as traditional root beer. The bark of the hickory nut tree can be stripped off and boiled into a simple syrup, that boasts an earthy, nutty flavor and can be added to breakfast foods and baked meats.

Birch bark can be used as a flavoring, providing a sweet, wintergreen kind of taste. In parts of Scandinavia, pine bark is reduced to powder and made into cookies with the subtle flavor of Christmas. The ponderosa pine, for example, smells distinctly of vanilla.

In the middle ages, a lot of bitter barks were used to make beer, as well as being used for dyes, says Pascal Baudar, a professional forager and wild food consultant. Baudar likes to roast bark and use it in vinegar, which imparts a smoky, aged taste.

He’ll sometimes smoke and roast old bark and put it in sauerkraut, or he might infuse the bark with beer or white wine and use it cook fish. Baudar also uses bark as part of his concoction to make bitters, but a lot of the time, he simply uses bark to plate the food, rather than as an ingredient itself.

Linden tree bracts and flowers, which make an aromatic and relaxing herbal tea. (Photo: The 3 Foragers)

Leaves
To answer your burning question: yes, you can make trees into salad. The young, tender leaves of trees like the beech, birch, Chinese elm, fennel, mulberry, hawthorne, sassafras, and linden can be tossed into a salad, though some are better tasting than others. You can also pick and eat them fresh off the tree.

Steven Brill has used the very young leaves of white oak trees to make wine (the best wild wine he’s ever made, he says). Leaves, like cambium, have also served as a famine food in the past, as well as being used for medicinal purposes.

Black locust flowers, equally beautiful and delicious, can be used to make sweet and fragrant crepes, doughnuts, drinks, and custards—though all other parts of the tree are toxic. (Photo: The 3 Foragers)

Flowers
A number of trees grow delicious flowers. Right now, says Naha, the redbud tree boasts beautiful and very nutritious pink flowers, which are packed with antioxidants. And, if you miss your window, you’re still in luck: when the flowers fade, they turn into tiny pods, which can be cooked and eaten like snow peas.

The flowers of the linden tree are the most famous, used in various calming teas and cordials. Those of the black locust are also scrumptious, though be careful―they’re the only part of that tree that isn’t toxic.

Pine pollen, apparently high in testosterone, is used as a dietary supplement, added to baked goods and smoothies. (Photo: The 3 Foragers)

Other comestibles
Maple trees are not the only trees from which you can collect sap. People sometimes tap birch, black walnut, and hickory trees, though their sap has a lower sugar concentration than that of the maple, which makes transformation into syrup too much of a hassle.

Pine trees boast a cornucopia of edible parts. Not only can the cambium, needles, and tips be used in food, but pine cones―the young, male ones―are also edible. The male cones are small and soft, in contrast with their tougher female counterparts. In fact, they are less cones and more clusters (strobilus). On top of that, pine pollen is also collected for use as a dietary supplement.

As for all those tree branches? The twigs of some trees, like the birch and spice bush, can be scratched to extract flavor for drinks, puddings, and sorbets, according to Monger, of The 3 Foragers blog.

There’s definitely a learning curve―don’t just set off into the nearest forest and start tasting plants. While the bark and cambium of most trees is edible, or at least harmless, there are also toxic ones loaded with tannin and cyanide, like in yew and cherry trees.

The ultimate toxic tree is the deadly manchineel, which you should not touch or even go near. You should also be mindful of the trees themselves; when you are harvesting the inner bark, you must make sure not to strip off an entire ring or you’ll kill the tree, cutting off the irrigation system that allows water from the roots to reach the leaves. Brill says that you’d have to be a very particular kind of herbivore―one who specializes in browsing rather than grazing―to really make food out of trees.

And while the internet provides all kinds of field guides, foraging blogs and apps, your best move is to find a forager in your area and go out with them. Dedicated foragers go out nearly every day, and they know exactly where to look―which means that for the most part, you won’t be looking at trees.