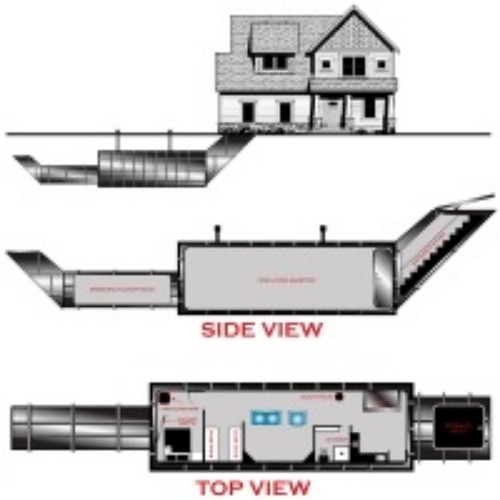 Recently I saw a show called Extreme Survival Bunkers on TV that got me tothinking. The show detailed several different people and their plans for building bunkers to ride out any mass casualty or TEOTWAWKI events.  If you’re looking for an hour of fairly entertaining television then I would highly recommend it.  If you’re looking for advice on how to Prudently and Reasonable Prepare then I would probably not recommend bothering to take notes…

The concept behind large underground bunkers like the ones detailed in the show is to securely house and provide for multiple people or even multiple families for a period of months or years.  The bunkers highlighted cost between a couple hundred thousand dollars up into the millions.  Two of the manufacturers are Vivos and Rising S Company.  Check out their websites, the bunkers they build are definitely cool.

But what exactly are you preparing for with this type of shelter?  I’m perfectly fine with building a storm shelter if you live in an area of the country that is prone to hurricanes or tornadoes.  I believe that to be a Prudent and Reasonable way to Prepare for a likely event.  But a long term survival bunker is something you would build if you were preparing for mass extinction events like nuclear war, EMP, global pandemic, catastrophic meteor strikes, or super-volcanic eruption.  And, while I did just list five events right off the top of my head that would leave anyone wishing for access to a bunker, they are still five very very unlikely events.

I prefer to prepare for more likely events that may affect a region of the country and could require a person to be self sufficient for a period of time, but which will pass.  Disasters like this happen every year multiple times in this country alone.  Hurricanes, earthquakes, blizzards, power outages, tornadoes, etc…  We see these disasters strike every year and they are what I choose to spend my money and time preparing for and defending against.  Not an end of the world scenario that is a) extremely unlikely and b) even if it were to happen unlikely to leave me able to reach my bunker anyhow.

Some of the bunkers featured looked to be on their owners immediate property.  A small underground shelter like this that could be accessed quickly in the event of emergency would actually be pretty cool.  Especially if you live in an area often hit with tornadoes or hurricanes.

Some of the other bunkers appeared to be in remote locations (one of them in an old missile silo) and was set up more like a giant apartment complex.  How would one even expect to get to this bunker in an emergency?  And who are your new neighbors if you do all make it?  I don’t even like sharing a table at Beni Hana’s, I can’t imagine living underground with a few hundred strangers for a year or two.

I guess you could build your own large underground bunker and live there full-time, they certainly make them big enough.  But seriously, that’s the life you want?  I’m not too interested in living underground when I could be up enjoying the sunshine.  I’m even less interested in finding out what life looks like a year or two after a mass extinction event.  Every scenario I can think of looks pretty grim.

So, while I would probably have a small shelter set up if I had unlimited cash I doubt I would go for the bigtime “stay underground for years” type bunker.  I’m just too claustrophobic.  I’ll take my chances with the zombies, thank you very much…