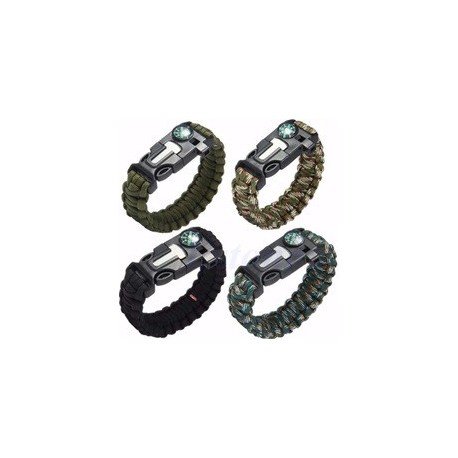 There are few fashion accessories that can save your life. Survival watches, survival belts are two that come to mind but there’s one survival accessory I like even more.

Survival bracelets are usually made from paracord and they include useful survival tools.

Why? Since it’s invention in WWII, paracord has proven to be insanely useful for survival. And for the military, that means on the battlefield.

Paracord is also included in astronaut gear list – you know, the one NASA sends into space!

So survival bracelets are worthwhile, but there’s an overwhelming number of them on the market today.

Some survival bracelets are standard, basic, and to the point. While others come equipped with an array of survival tools packed into them. Becoming a miniature survival kit by themselves.

So today, to help wade through the sea of options, we’ll cover a few of the highest rated survival bracelets. We’ll also suggest a few we like best and are most effective for survival.

But investing in a survival bracelet is just the first step, you also need to understand how to use one.

So I’ll also discuss how to make your own survival bracelets from scratch and some of the many survival uses for paracord.

The Magic of Paracord

Before we dive in, let’s take a second to admire paracord, the material most survival bracelets are made from.

Paracord was initially called “parachute cord.” It’s a high-tensile strength nylon cord and made its first appearance in World War II. It was designed to hold together paratroopers’ parachutes.

Suddenly, paratroopers were leaping out of planes over war-torn Europe. Trusting their lives with the nylon parachute cord that held together their chutes.

Even after the paratroopers landed, they found lots of new uses for the material.

It became a common practice to strip the parachute of its paracord cord after landing, for later use.

Since then, it’s become standard issue for soldiers in the US army often knotted into a survival bracelet!

It’s a high utility survival accessory that can be easily accessed when you need it.

As mentioned, NASA also uses paracord. They now include paracord in their extensive cargo list. A list that only consists of the lightest weight and most useful materials known to man.

It’s good enough to make the list for survival in space. It was even used on a mission to the Hubble Space Telescope to make improvised repairs!

Paracord is badass stuff. And it’s a great addition to your bug-out-bag, get home bag, or survival pack, even if you’re not into wearing it as a bracelet.

This slick wrist accessory comes with 10 feet of 500 lb tensile strength green paracord. But it also comes with:

Being able to use your survival bracelet to start a fire, navigate, and signal for help are critical skills in a desperate situation. Not to mention all the paracord and a knife to cut it into segments

Unlike most of the other survival bracelets on this list, this one doesn’t use paracord. It uses stainless steel “tread” pieces, that can be adjusted, so the bracelet fits any wrist.

That’s not the only difference this model offers. Also unlike other survival bracelets, this one is a mechanical toolbox for your wrist.

While this bracelet may not be ideal for wilderness survival, it’s a reliable accessory for urban survival.

If you’re out riding a 4-wheeler or dirt bike or need to fix a radio this type of survival bracelet is your best option.

If you want an “all-in-one” bracelet that packs tons of survival gear into a wrist accessory – this option is for you. There isn’t much they left out of this survival package.

These are just a few of the many resources wrapped up in this survival bracelet with a firestarter.

If you find yourself lost in the wild, there isn’t a better bracelet to have on hand – because this one has it all!

While the rest of the survival bracelets here are multi-tools, this is the most basic one that made the list. But don’t let its simplicity fool you.

Paracord is so versatile and has so many survival uses; it’s considered a multi-tool by itself.

The TITAN paracord bracelet is made with a stainless steel bow shackle clasp. A secure clasp that can hold up to 1,650 static pounds of weight.

It includes 10 feet of high strength 550 paracord, as well as a built-in survival whistle and a reflective signaling plate. Winter is one of the perfect seasons to have fun when it comes to outdoor adventure. The best experience of hiking, mountain climbing, skiing, snowboarding, and much more could be gotten during the winter. But do you know that during the winter the condition is more extreme? The cold temperature that winter brings can result in frostbite or hypothermia.

If you have been using your flash drive as a simple file transfer tool, then you’re missing a lot of what the power of such a simple storage device can do. A simple flash drive can also be used as a powerful vehicle to carry a portable repository of software that can store your important documents such as insurance policies, mortgage deeds, financial records, passports, supplies locations,  firearm records, hundreds of free e-books, and of course family photos.

Think about the recent hurricanes, or earthquakes, and your home has been destroyed.  How will you recover your important documents?  Do you have all your information commited to memory?  The old saying, “a picture is worth a thousand words.” is very true.  A well-loaded USB drive can contain all the important software that are required during an emergency.

A full-featured portable software menu and file management system that lets you carry a full office suite, the Bible, hundreds of E-Books, Photos, pictures of documents, and much more. SHTFandGO has released a new USB Survival Stick that has Portable Apps  that allow you to easily keep track of assets. Just plug the USB Drive into any PC and follow the examples and you can have all your documents backup onto a durable, metal cased, waterproof, USB drive that could literally save your life.  You can add and remove software programs easily and when using the USB on a PC, the USB Stick leaves no trace of ever being used, since the apps are self contained and doesn’t need any resources from the PC to operate.  You can even encrypt the USB stick so that no one can access the data without your passcode.

Make use of these powerful portable utilities and stay prepared for all types of emergencies.

Click here to see the drive in our store