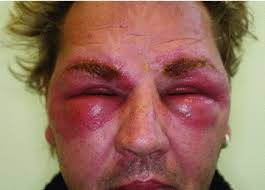 Not having at least one box of anti-histamines in the house at all times is a huge mistake. Not having a large supply in store for emergency use is a massively huge mistake.

Histamine is present in most cells, it’s biologically active and is released in response to a foreign pathogen that irritates the body causing it to be released. It isn’t just released by irritants. Infection, physical damage and allergies all cause the substance to move from our cells and course around our body. A great deal goes on within the body before the hives that we associate with an allergy appear, and more still goes on before tissues start to swell and distort, a sign that an alleged is severely affecting the victim. You can find a full description of the sequence of events here.

Anti-histamines can relieve many of the symptoms associated with allergies. They can’t cure them but they can and do make life more comfortable for millions of people everyday.

Sensitivities to drugs, stings and foods are rarely life-threatening in the first instance unless the reaction is overwhelming tor the person is extremely sensitive to the substance in question. A good example is multiple bee or wasp stings that cause such a massive reaction that tissues swell and anaphylaxis occurs.

Antihistamines can slow down a reaction to an allergen, it buys you a little time in cases of severe allergies, time to call an ambulance or get to a hospital where airway and respiratory management is available.

An Epipen containing adrenalin should be high on your priority list if you can get one…here in the UK that’s impossible to do unless you are already known to be likely to suffer from, or have previously suffered from anaphylaxis.

So what happens though in times when help isn’t coming? In any kind of societal collapse hospitals may not be functioning in any normal sense of the word, what would you do then?

Airway management requires specialist equipment that is usually only available to those in the medical profession who are allowed to procure things such as endotracheal tubes and nano-pharyngeal tubes, then there’s the laryngoscope that you would need to visualise the larynx in order to site the tube. On top of this you need to have enough knowledge of anatomy to site the tube correctly so that oxygen actually ends up in the lung not the stomach. In a case of anaphylaxis shock where tissues are swelling and distorting it’s highly unlikely someone who doesn’t place tubes on a very regular basis would be able to do it. It’s at least a weekly occurrence to have a patient with a difficult airway that tries the patience of the most experienced airway management technician and even qualified anaesthetists that conduct laryngoscopy on a multi-times daily basis get the odd case they will struggle with.

In a collapse situation it’s safe to say that intubation isn’t an option for 99.99% of the population outside of the hospital environment.

This is why you need a huge stock of antihistamine medication.

If someone presents with anaphalaxis and their airways are swelling and closing they are in dire straights. Other internal changes are taking place and the situation will worsen very quickly, in short, unless something is done they will most likely die. ANYTHING you can do to possibly save them is on the table and giving them a large dose (two-three tablets) of antihistamine medication whilst they can still swallow is possibly the only hope they have.

Antihistamines can cause problems taken in large doses or if taken long-term as a preventative measure. The incidence of problems however is low and a life-threatening emergency has to be the priority.

At the FIRST sign of severe allergy get those drugs in, crush them up in a small amount of water and get it into them, they will get into the victims system faster if they don’t have to dissolve first so crushing them into powder makes them more easily soluble.

Ignore the one a day rule: Any numbness of the nose and mouth, swelling of the nose, lips and eyelids says it’s severe and if you know you cannot get to medical help within minutes give at least two crushed antihistamine tablets immediately.

In the short term you are not causing any damage to your patient. Enough of the drug needs to be given to start to counteract the effects of the allergen…and we have no idea how much that is because we can’t see what’s going on inside the patient.

Yes, if you have medical knowledge and the outside of a ball-point pen you can do a tracheostomy on the kitchen table but most people would be unable to cut a hole in their loved ones throat!

If you decide to take that option please make sure they have taken their last breath first – that way you won’y bear the unbearable responsibility of feeling you have killed them if it doesn’t work.

The human brain can go a full minute without oxygen before the effects start to become apparent.

Symptoms of a severe allergic reaction include:

Note that not all of these things will be present in every person suffering from a severe allergy.

On a less dramatic note having a large supply of antihistamines available can make life more bearable generally by easing itching and congestion in a variety of conditions from hay fever to mosquito bites.

Try and have some of the “may cause drowsiness” for the little ones, an itchy miserable child won’t sleep well and this has a knock on effect for the entire family. Getting them to drift off is no easy task when they are fractious. Most antihistamine medications are safe for youngsters and sleep provides relief for them primarily but also respite for everyone else.