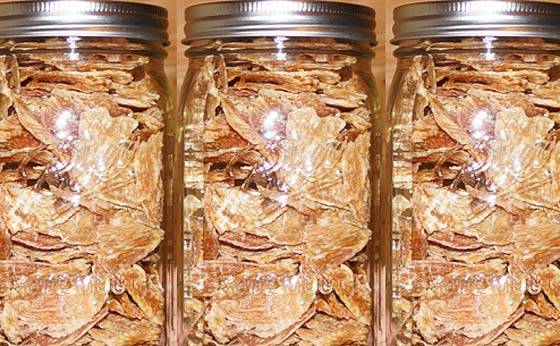 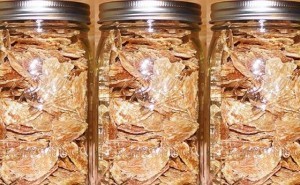 Two years ago I happened to make a particular batch of dehydrated chicken strips. The other day while defrosting one of the chest freezers we discovered a jar from this particular batch. Being two years old, I thought it would be helpful to be the ‘guinea pig’ and sample it, and report whether or not I survived…

Here’s my ‘shelf life’ report,
and the original article how I made these dehydrated chicken strips:

Here’s a picture of the newly discovered ‘canning jar’ of chicken strips: 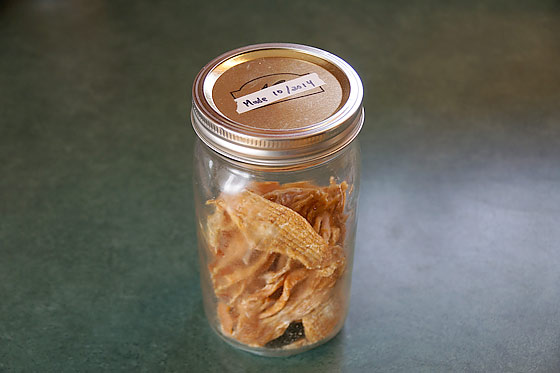 We often store our various home dehydrated foods in canning jars and then vacuum seal them with this jar sealer tool. I’m sure that being vacuum sealed greatly enhances the shelf life…

In addition, since it is meat, and since we had room in the freezer – we kept it there.

Note: Obviously the freezer was key here. With that said, I was still curious after 2 years in the freezer which is generally not recommended for meat (lots of variability with that statement though).
The reason that we dehydrate chicken strips is actually for the dog – who loves to eat these as treats. He’s not spoiled or anything… ?

I am happy to report that not only did I not keel over and that Mrs.J did not have to dial 911, the chicken strips were still damn good! The dog was eying me as I tried one, and he let me know that I better stop at ‘just one’… the rest are for him ?
The Original Article:

How I Made Dehydrated Chicken Strips

It’s better to use chicken breast rather than dark meat because the dark meat has more fat in it and will spoil more quickly than the breast meat.

I used chicken breast that was still ‘on the bone’ (because it was on sale) and then simply sliced the meat off the bone with a sharp knife. Having a very sharp knife is important!
The next step is to trim away all skin and fat from the meat because the fat will go rancid if you leave it on. As you can see in the picture, I simply used a cutting board, a sharp knife, and kept a bowl nearby to throw in the fatty pieces of meat.

I discarded the skin but saved the fatty pieces of trimmed chicken to cook them separately for immediate consumption ? – less waste that way… 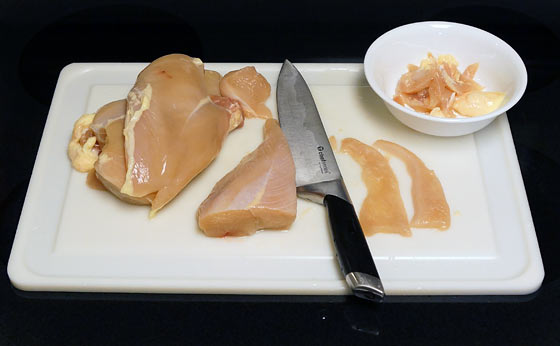 Tip: If you partially freeze the chicken, it is easier to cut consistent width strips.
I then placed the chicken strips on my dehydrator trays and then set the dehydrator temperature to it’s max setting of 155-degrees F. 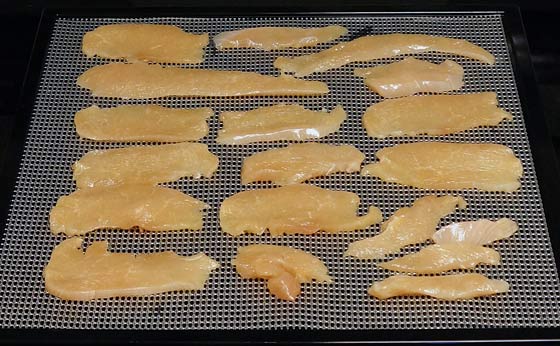 Dehydrate the chicken strips until they at least reach a leathery consistency. Personally I like to dry them longer until they’re very crisp. This way they’re drier and they will last longer.

The dehydrate time will vary anywhere from 6 to 16 hours depending on your environmental conditions, how thick the chicken strips are, and how dry that you want them. Plan on starting this process in the morning so that you won’t run out of time during the process before having to call it a night and go to bed… 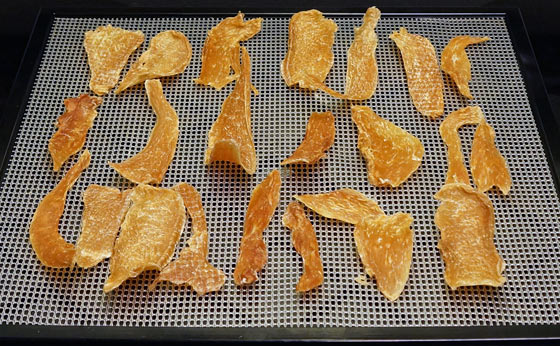 After the chicken strips have finished dehydrating, I broke them up into smaller pieces to keep them in canning jars sealed with a vacuum sealer ‘jar sealer’ attachment.

I also keep the jars in the fridge for an even longer shelf life. Home dehydrated chicken strips should last at least 1 to 2 months stored at room temperature (depending on storage conditions and environment), and much longer if refrigerated or frozen. The thing is, I can never test the actual shelf life because these things disappear sooner rather than later…