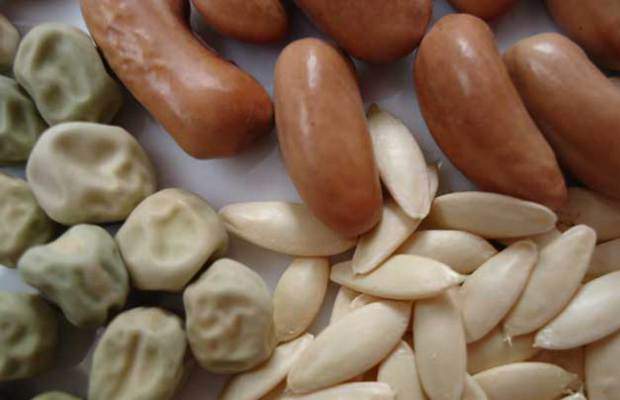 You have probably heard of seed saving, where you save a plant’s seeds or tubers at the end of a growing season to serve as the seed source for the following year. This is great because choosing the proper plants and practicing proper seed-saving methods gives you to a free, self-perpetuating garden year after year. Saving seed also means you can share seeds with friends and neighbors, so everyone can start growing their own.

Many people, however, are not as familiar with the concept of a personal seed bank. A personal seed bank is like seed saving on steroids. You save seed for the coming season’s planting, but you also bank seed for longer storage, just in case.

What that “just in case” might be varies. Some people have created a personal seed bank as insurance against crop failures. Others believe a personal seed bank is necessary in the event of a partial (or total) societal collapse. Many people just like the idea of being sustainable and self sufficient. And, of course, seed saving can be a fun hobby. The most important thing to remember when planning your personal seed bank is that you can only save and store open-pollinated, non-hybridized, non-GMO seeds. Why? Because genetically modified and hybridized seeds have been dinked with by large corporations such as Monsanto, which doesn’t want you to be able to save your own seeds. Why? Because they want you to have to buy seeds from them year after year. Hybridized or GMO seeds frequently have sterile first generation offspring (F1 is a designation you might have seen). This means that while you’ll get viable plants from the seeds you buy, the seeds you save from those plants will likely be sterile. If they’re not sterile, they’ll produce offspring that are so unlike the parents with such a wide variety of characteristics that they will be a disappointment and not useful. Only buy heirloom, open-pollinated seeds from trusted sources.

The second thing to decide when planning a seed bank is what kinds of seed you want to save. The best seeds to save are from fruits and vegetables you enjoy eating the most, but experience comes into play, too. If you’re a beginning seed saver, to start it’s best to bank seeds that require the lowest skill set. This way you can focus your first growing season on learning seed saving techniques and still have viable, usable seed banked in preparation for the following growing season, at which time you’ll expand your skill. The easiest seeds to save and bank are self-pollinated seeds (see below for more info on this).

The third thing to decide when planning a seed bank is what seeds would be best to save. This can vary greatly depending upon the reason why you are choosing to create a personal seed bank. If you’re banking seed as insurance against a crop failure in your garden or to be more self-sufficient, then banking what you like is the best option. If you’re banking seed as insurance against a societal collapse, then you’ll need to bank a wider variety of seeds and include many types that you may not have ever grown before, including grains like wheat or barley. Be advised, though, that in these cases it is a good idea to get some experience growing these seeds before a collapse occurs; your seed bank will be useless if you don’t know how to grow the seeds you have.

If you’ve never saved seed before, you’ll have to buy your first seeds from a commercial grower or be lucky enough to have seed-saving friends who are willing to help you with your first crop. Excellent commercial sources for heirloom, open-pollinated seeds include Seed Savers Exchange, Native Seed Search, Southern Exposure Seed Exchange, Sustainable Seed Company, Baker Creek Heirloom Seeds, and Abundant Life Seeds, among others.

Another alternative is to buy a pre-made seed bank that is already packaged and set for storage. This is a great idea for those who want a head start on their seed bank and have some insurance on-hand until a self-made seed bank has been created (which can take several years). A good source for a seed bank such as this is sold by Camping Survival. They sell a 6-can set that is organized by use type. For instance, the “Culinary Herb” can includes a variety of common herbs from basil to thyme, and the “Ancient Grains” can includes barley, flax, amaranth, and others. The ‘Medicinal Herbs” can is especially beneficial to have and is often overlooked in seed banks.

The best and easiest seeds to save (and therefore bank) are self-pollinated seeds, which include tomatoes, beans, lettuce, peas, chicory, and endive. These plants have reliable seed set the same year they are planted, and they are self-pollinating. Self-pollinated seeds fertilize themselves, meaning the pollen from a plant’s flower fertilizes the stigma on that same flower. No muss, no fuss. There are few worries about cross-pollination or accidental hybridization. You get the same variety of tomato or bean year after year, though it is recommended to separate varieties by a row, just in case.

Self pollination is one way seeds of concern to home growers reproduce; the other two modes of reproduction are insects and wind pollination. This is where things can get tricky, because in these cases pollen from a plant up to a mile away can fertilize a plant in your garden. This increases the chance of hybridized plants, whose seeds will not breed true when planted. Because of this, insect and wind-pollinated plants such as corn or onions have to be manipulated by the grower to ensure that pollination is limited to same varieties.

More experienced seed savers can take on plants that require more intervention to insure that saved seed breeds true.  Crops such as corn, cucumber, radish, spinach, and squashes (among others) produce seed the same year they are planted, but require the grower to intervene to prevent unwanted hybridization. This intervention can come in the form of hand-pollinating the plants to prevent cross-pollination, or making sure there is considerable distance between the variety you are growing and other varieties (this distance can vary between 100 feet and a mile, depending upon the plant).

Biennial vegetable seeds set seed the year after they are planted, and as a result expert seed savers can take on the two-year commitment needed to save these seeds. Biennial vegetables include onions, carrots, cabbages, beets, swiss chard, turnips, celery, leeks, and others. Instead of harvesting at the end of the first growing season, the plants need to be successfully overwintered the same year they are planted (this can vary depending upon if you live in the north or south). The second growing season is when the plants will flower and set seed. These plants also need to be separated from other varieties to avoid cross-pollination.

No, this has nothing to do with religion. What it does have to do with is how well a seed withstands the freezing and drying conditions that are necessary to maintain a seed bank. Orthodox seeds can be dried and frozen for storage and remain viable for a period of time, but some seeds take to this better than others. Some seeds can be stored up to 10 years or more, others begin to lose viability after one year. For most common vegetable plants, three to five years is about as long as they can be stored, though some plants (like parsnips) really need to be used within a year or two.

Ideally, seeds need to be dried to less than 7% moisture and, for maximum storage length, frozen to no warmer than zero degrees Farenheit (a home freezer may reach this temperature). The lower the temperature, however, the longer seeds will remain viable. Most vegetables known to the home gardener are orthodox seeds, such as peas, corn, and tomatoes. In fact, about 80% of plant species are orthodox seeds.

Recalcitrant seeds can’t be dried for storage and must be planted immediately. Tropical plants such as mangoes, coconuts, and tea are recalcitrant. Intermediate seeds can take some drying for short-term storage, but they are not viable options for a personal seed bank. Examples of intermediate seeds include coffee, papaya, and others.

The best free online resource for learning how to save specific vegetable seeds can be found at the International Seed Saving Institute. They have a complete seed-saving guide, which includes how to address the pollination needs of individual plants and harvest the seeds to best advantage.