Multiple sizes and shapes of Air Rifle Pellets and Bullets

Select the drop down menu to find the ammo that fits your needs.

Different Types of Air Rifle Ammunition are use for different uses.

For smaller caliber rifles you will want a pellet or bullet that can transmit as much energy as possible into the animal to inflict the maximum amount of damage.  Wadcutter, flat point, and hollow point ammo is best used for this purpose.  Round nose can be used as well on larger calibers shooting longer distances.  There is an energy delivered curve to calculate out the maximum amount damage.  Most people look at small caliber air rifles at the manufacturers max feet per second, but that is not the most important information.  Look at the chart below for real world numbers of energy being delivered from a 50 caliber air rifle.

The slowest bullet at 550 grain delivers the most energy, but accuracy at longer ranges would definitely suffer.

Competition or Sport Shooting is all about accuracy.  Match grade ammo is important because you want pellet/bullet weight and diameter as constant as possible.  Most competition shooters are also shooting at a much lower velocity at 560 feet per second.

A unique Shell used in Seneca Wing Shot Air Shotgun.  This ammo come in #6 shot size and empty capsules that allow you to load any shot size you want. 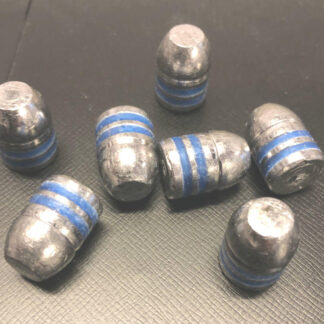