Celox Gauze is a high density gauze, impregnated with the proven Celox granules, individually sterile packed in a ruggedized pouch with tear notches for fast opening. It is 5 foot z-folded pack for individual first aid kits.

Celox Gauze is the treatment for severe bleeding. This hemostatic gauze has been in use by UK and other forces and is now recommended by the US military Committee on Tactical Combat Casualty Care.  It uses the proven Celox granules laminated on to a dense gauze, so it is quickly and easily packed into bleeding wounds. The hemostatic gauze is especially useful in challenging conditions, in wind, rain or poor visibility.

In the recent DoD comparative study, Celox Gauze had the least overall blood loss, the highest observed survival and the highest overall hemostasis of all products.

The Hemostatic Gauze with the highest observed survival rate in test.

Now Z-folded for ease of application. 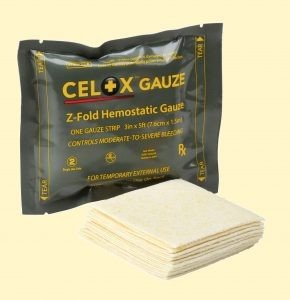