Celox™ Rapid hemostatic dressing bridges the significant capability gap between this urgency and the current standard of treatment for hemorrhage control.

Celox Rapid gauze uses Chito-R™ which is made up of proven Celox Chitosan granules plus a small amount of proprietary bioadhesive. Chito-R makes the dressing hold in place on the wound 50 times stronger than before*. This means a significantly faster plug formation that stops bleeding with less treatment time.

The Chitosan within Celox Rapid is the same ingredient as used in Celox products since 2006 and uses the same gauze substrate as Celox Gauze. The new bioadhesive is a well-known added “NF” grade ingredient – meeting the US National Formulary requirements to add to pharmaceuticals – and is widely used in medical and drug products.

Military and Law Enforcement customers in the USA and NATO allied nations have chosen Celox Rapid through their selection process for its effectiveness and rapid treatment time.

As well as reducing treatment time and blood loss, a laboratory model of tactical evacuation showed that the Celox Rapid gauze stayed in place during transport with no re-bleeding. So the benefits of reduced blood loss are carried through to the next echelon of care

Be the first to review “Celox™ Rapid Gauze” Cancel reply 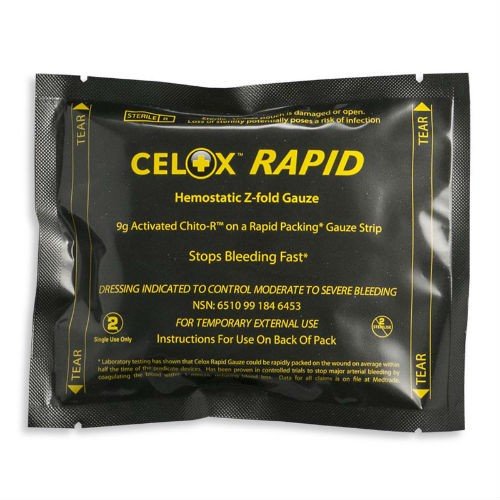