The power grid has been down for weeks. Floodwaters fill city streets. Earthquakes have reduced roadways to rubble. Civilization is breaking down and there’s nowhere to go. Don’t expect the National Guard to rush in to protect the city — it’s every man, woman, and family for themselves. When looting, disorder, and anarchy sweep the land following a nightmare scenario, only those who have followed the action plan presented in this book will be armed with the tools and tactics needed to protect themselves and their property against destruction. From securing stored food, caching valuables, and stocking ammunition to building effective fencing, installing surveillance equipment, and training in the use firearms, this book is the most comprehensive, no-holds-barred guide to effectively saving the lives of one’s family members and ensuring the security of the home. Even if one doesn’t own a house, Prepper’s Home Defense is a powerful survival tool for those trapped in a big city during a natural or man-made disaster, showing how even apartment- and condo-dwellers can survive for days without assistance and effectively use deadly force to protect themselves should the unthinkable unfold.

Be the first to review “Prepper’s Home Defense” Cancel reply 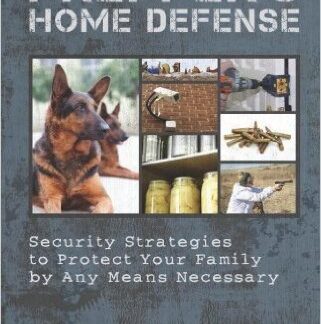