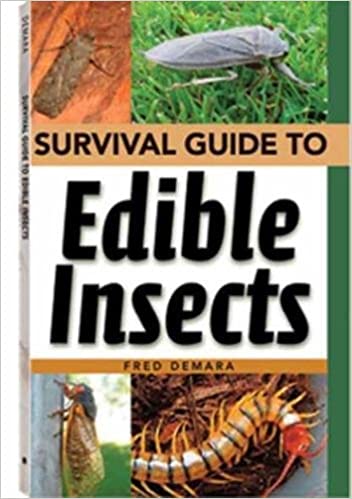 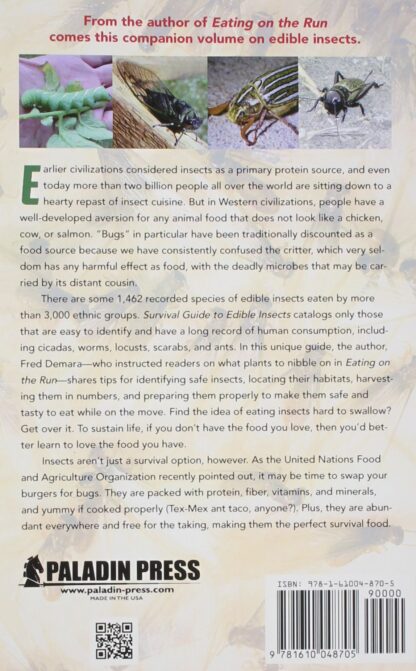 Earlier civilizations considered insects as a primary protein source, and even today more than two billion people all over the world are sitting down to a hearty repast of insect cuisine. But in Western civilizations, people have a well-developed aversion for any animal food that does not look like a chicken, cow, or salmon. “Bugs” in particular have been traditionally discounted as a food source because we have consistently confused the critter, which very seldom has any harmful effect as food, with the deadly microbes that may be carried by its distant cousin.

There are some 1,462 recorded species of edible insects eaten by more than 3,000 ethnic groups. Survival Guide to Edible Insects catalogs only those that are easy to identify and have a long record of human consumption, including cicadas, worms, locusts, scarabs, and ants. In this unique guide, the author, Fred Demara—who instructed readers on what plants to nibble on in Eating on the Run —shares tips for identifying safe insects, locating their habitats, harvesting them in numbers, and preparing them properly to make them safe and tasty to eat while on the move. Find the idea of eating insects hard to swallow? Get over it. To sustain life, if you don’t have the food you love, then you’d better learn to love the food you have.

Insects aren’t just a survival option, however. As the United Nations Food and Agriculture Organization recently pointed out, it may be time to swap your burgers for bugs. They are packed with protein, fiber, vitamins, and minerals, and yummy if cooked properly (Tex-Mex ant taco, anyone?). Plus, they are abundant everywhere and free for the taking, making them the perfect survival food. 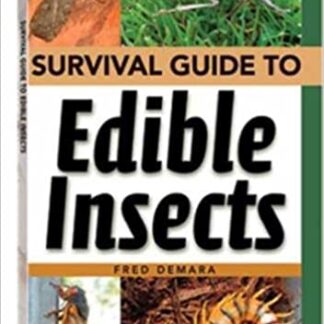 You're viewing: Survival Guide to Edible Insects $10.00
Add to cart