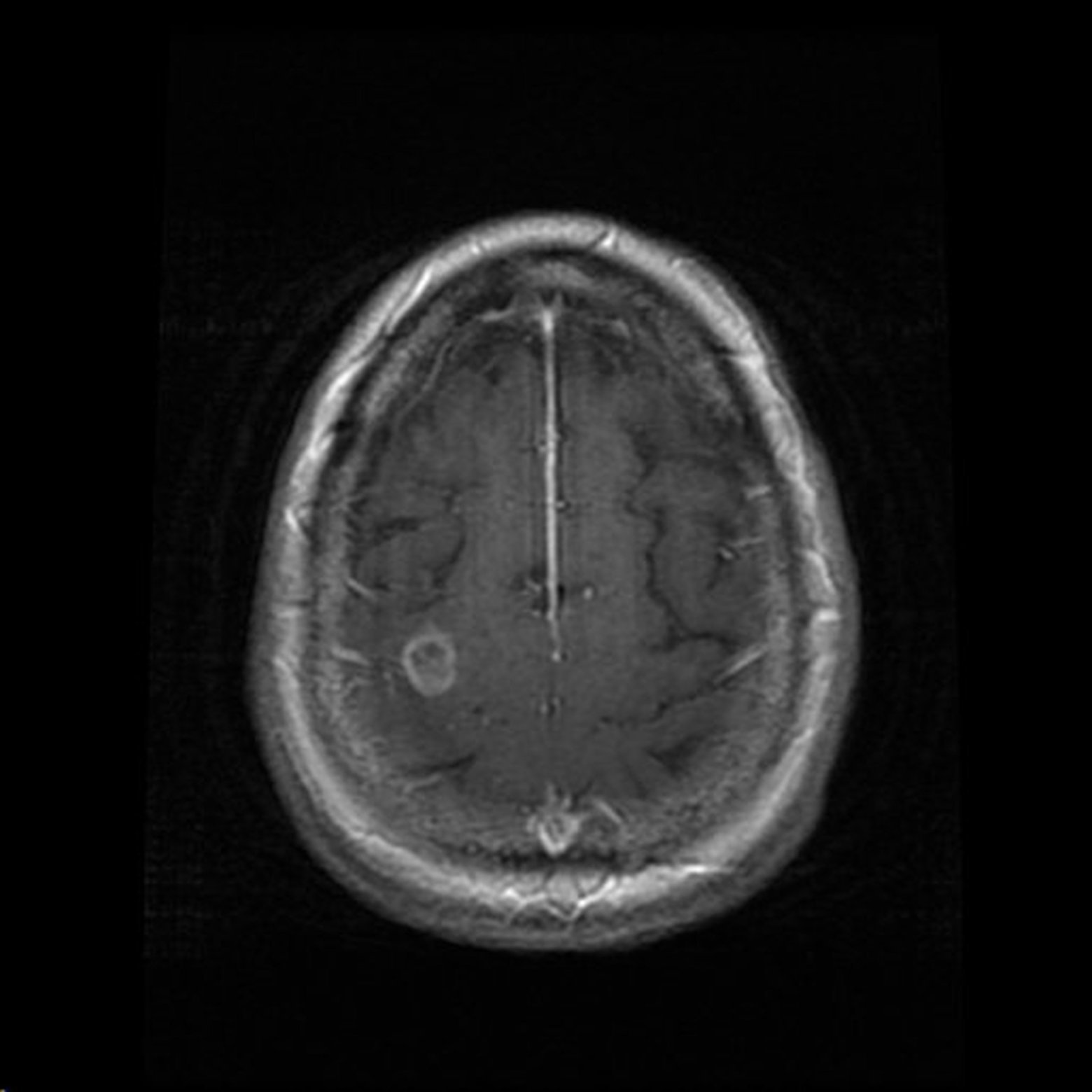 An MRI of the Seattle woman’s brain in January 2018. Doctors initially thought the ringed lesion on the left was a tumor, because the woman had a history of breast cancer. (Dr. Daniel Susanto / Swedish Medical Center)

Researchers said the amoebas likely got into the woman’s brain through the tap water she used to fill a neti pot, rather than using saline or sterile water. The organisms entered her brain after she squirted the water up into her upper nasal cavity.

When a 69-year-old Seattle woman underwent brain surgery earlier this year at Swedish Medical Center, her doctors were stumped.

Last January, the woman was admitted to the hospital’s emergency department after suffering a seizure. Doctors took a CT scan of her brain to determine the cause, finding what they initially thought was a tumor. But an examination of tissue taken from her brain during surgery a day later showed she was up against a much deadlier attack, one that had been underway for about a year and was literally eating her alive.

“When I operated on this lady, a section of her brain about the size of a golf ball was bloody mush,” Dr. Charles Cobbs, neurosurgeon at Swedish, said in a phone interview. “There were these amoeba all over the place just eating brain cells. We didn’t have any clue what was going on, but when we got the actual tissue we could see it was the amoeba.”

The woman died a month later from the rare organisms that entered her brain after being injected into her nasal cavity by way of a neti pot, a teapot-shaped product used to rinse out the sinuses and nasal cavity, according to a case study recently published in the International Journal of Infectious Diseases.

The study was authored by Swedish doctors and researchers who worked on her case, including Cobbs. The publication doesn’t identify the victim.

The woman’s infection is the second ever reported in Seattle — the first came in 2013 — but the first fatality to be caused by it. In 1990, researchers first became aware that this type of amoeba can cause disease in people, according to a study published in Clinical Infectious Diseases in November. That report found there have been 109 cases of the amoeba reported in the U.S. between 1974 and 2016. Ninety percent of those cases were fatal.

Amoebas are single-celled organisms, some of which can cause disease. Since they thrive in warm soil and water, some local doctors are growing concerned that the woman’s deadly infection could be among other southern-hemisphere diseases that may become spread northward toward the Pacific Northwest amid warming temperatures. The organisms are commonly found in South America and Central America, but may now have a better chance of survival in other, usually cooler places, such as Washington.

“I think we are going to see a lot more infections that we see south (move) north, as we have a warming of our environment,” said Dr. Cynthia Maree, a Swedish infectious-disease doctor who co-authored the case study about the woman’s condition. “Considering the mortality associated with this infection, my hope was that I was wrong. But my fear was that I was right.”

In the case of the Seattle woman, she likely became infected with the amoebas from her tap water, according to the researchers. Rather than filling her neti pot with saline or sterile water, she used tap water filtered through a store-bought water filter. She then shot the contaminated water far up her nasal cavity toward olfactory nerves in the upper part of her nasal cavity, causing the brain-eating infection called granulomatous amoebic encephalitis (GAE).

Amoebas may be found in fresh-water sources around Puget Sound such as wells, but aren’t present in city-treated water, according to Liz Coleman, a spokeswoman for the Environmental Public Health division of the state’s Department of Health. The researchers weren’t able to test the woman’s tap water, but people cannot be infected by simply swallowing water contaminated with the amoebas, according to Cobbs.

After contracting the amoebas, the woman developed a red sore on her nose. For about a year, the sore was misdiagnosed and being treated as a common, treatable skin condition known as rosacea, the study said. Cobbs said this was likely the first symptom of the amoeba, but its rarity makes the amoeba difficult to quickly diagnose.

“It’s such an incredibly uncommon disease it was not on anyone’s radar that this initial nose sore would be related to her brain,” Piper said.

The woman’s infection is the first to be linked to improper nasal lavage, according to Piper. Although the risk of infection to the brain is extremely low, people who use neti pots or other nasal-irrigation devices can nearly eliminate it by following directions printed on the devices, including using only saline or sterilized water, Maree said.

Three types of amoebas have been identified as causing fatal brain infections, according to Dr. Jennifer Cope, an epidemiologist with the Centers for Disease Control and Prevention’s unit that focuses on foodborne, waterborne and environmental diseases.

While infections remain rare, the Seattle woman died from the least-known of them all: Balamuthia mandrillaris. That’s a type of amoeba that moves more slowly and can take weeks or months to cause death. The other slow-acting amoeba is called Acanthamoeba spp.

Naegleria fowleri is the most documented, Cope said, because it acts quickly, causing an infection that leads to death in just a few days. New Jersey health officials linked a man’s death to N. fowleri in October. He was believed to have gotten infected while surfing in an indoor water park in Texas. N. fowleri is present in Puget Sound waters and other freshwater sources, Maree said. She wasn’t immediately aware of any other local cases of infection.

Cope said all three amoeba types have similar rates of prevalence, but Balamuthia mandrillaris is the least-recognized among the medical community because it is rarely documented, providing limited opportunity for research.

It is thought the amoebas are primarily soil-based, but the “exact environmental niche is really unknown”, Cope said in an email.

“From my understanding it’s everywhere. There are molds and fungi that can kill you if it infects your brain. MRSA (a treatable bacterial infection) is everywhere, but we don’t have a mechanism of injecting it into our brain,” Cobbs said. “It’s always going to be an uphill battle because people learn by seeing things over and over again, but I don’t think that there are going to be an increase in cases in the future. At least I hope not.”

Correction: The image of severe hemorrhaging in the woman’s brain is a CT scan. An earlier version of this story had incorrectly referred to the image in its caption as an MRI. This correction was made Dec. 6 at 12:08 p.m.