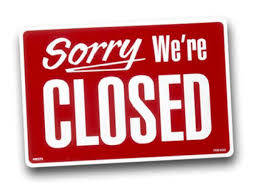 Many retail stores have closed due to competition from online stores. People are buying an ever larger percentage of their goods from the internet. So brick-and-mortar stores, from Mom and Pops to large chains, are shutting down. And this development is setting the stage for a shopping disaster.

We have become overly-dependent on the internet for many goods and services. What would happen if there is an internet collapse, and online shopping is no longer an option?

First of all, the number of retail stores has fallen to a level too low to support all our shopping needs. Physical stores would quickly be flooded with buyers. The shelves would be stripped bare in a matter of days (or hours, if people are panic-buying). And resupply from wholesalers and manufacturers would not be able to keep up with demand, not for a number of weeks or months.

Reopening closed stores and hiring new workers might not be practical, at least in the short term. And the small number of physical stores, despite vigorous resupply, would still be over-crowded and understaffed. There would be long lines at the checkout, or even long lines waiting to enter the store.

I recall a store I worked at, many years ago, in Worcester, Mass., called Spag’s. The store was so popular, that on some high-traffic days, they had to post guards at the entrances, to keep too many persons from entering the store. Once in a while, there were literally so many persons in each aisle that it was difficult to move. I’m sure they were violating fire regulations by the over-crowding. I’m not exaggerating. So the idea of too many customers to be serviced by a brick-and-mortar store is entirely possible.

Another problem, if internet collapses, is that payment approvals via internet might not be available. Today, when you swipe a credit or debit card in a card reader, it is verified over the internet. Gone are the days when the device dialed a phone number, waited to connect, and then obtained an approval number. No internet, means no credit or debit card payments. And most persons do not have enough cash in their homes for their shopping needs.

Runs on banks will deplete the cash supply. And using checks to pay for good might not be an option, because check approvals work via the internet as well. In addition, there is literally not enough cash in the country to meet the shopping needs of the nation. The vast majority of buying transactions are non-cash today. So the existing physical stores might not be able to accept payment.

One way, is if a foreign nation executes a cyber attack on the U.S. internet. But it doesn’t have to be a hostile nation. Terrorist groups and anonymous hacker groups, with varying motivations, might also be capable of such an attack.

And if you think that taking down the internet would be too difficult, think again. Recently, a large number of internet sites went down because the U.S. internet has become overly dependent on the cloud services of Amazon. And at Amazon, a low-level tech worker entered a command with a small typo, which accidentally shut down the servers running those services. You don’t realize how very small events can avalanche to cause a major shit-storm when computers and networks are at issue.

Another entirely different way that a shopping disaster could occur concerns shipping companies. The vast majority of online shopping products are delivered via a few major carriers: FedEx, UPS, DHL, and the U.S. Postal Service. If some disruption in society shuts down or interferes with shipping, online shopping will be obstructed. This disruption could take the form of a strike, due to disputes over wages and benefit, or due to some stupid new government law or policy. Or it could be caused by general civil unrest, which disrupts all transportation.

Our excessive dependence on the internet for shopping is going to come back around and bite us in the ass, sooner or later. Mark my words.