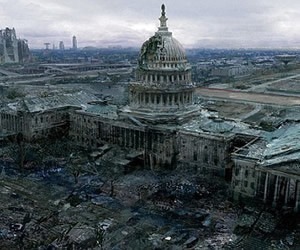 The question “what are you prepping for” has just about been worn out. There is no shortage of threats in our world to be concerned about and to take steps to prepare for. Take your pick. It could be an economic collapse, natural disasters, might be a nationwide power grid failure or terrorists with suitcase bombs attacking several cities simultaneously. All of these are valid threats. Join the growing rank of people who have decided to not be caught by surprise, but rather to be as well prepared as possible if any such disaster should strike. Since you’re reading this, you’re probably in that camp, too.

But one question that doesn’t get asked very often is whether the thing that you’re prepping for is an event or a process. What do I mean by that? And why would it matter?

An event would be a sudden occurrence, like an earthquake on the San Andreas Fault that causes a significant part of California to go bye-bye. Or an EMP (electromagnetic pulse), either solar or nuclear, that wipes out all of our electronics. Everything is fine one moment, then in an instant it’s not.

What would be the results of an SHTF event? There would be a significant loss of lives, followed by widespread shock and panic. Supplies and services would be disrupted for a long time, perhaps for a very long time. Panic buying would empty store shelves in a matter of a few days. Multitudes would be unemployed. No amount of government intervention would make a dent in the level of catastrophe affecting our world. Virtually every aspect of our lives would change from anything we had ever known before. Ready or not, everyone would be thrust into full-scale survival mode.

If an SHTF event occurs, you’re stuck with what you have. If you don’t already have it, you’re not going to be able to get it. If you’ve planned to buy a good rocket stove

, you’re too late. You won’t be able to get one anywhere now. Still working towards acquiring a top-notch first aid kit

? Kiss that plan goodbye. You’ve probably got a good supply of rice and beans and wheat on hand, but have you also stocked the spices and seasonings that you’ll need to make it taste good? That ship has sailed.

There are a lot of SHTF event scenarios that have a chance of occurring in our lifetime. That’s why we prep. But the bottom line for an SHTF event is that prepping time is over and implementation time has begun. If you don’t already have it when an SHTF event occurs, you’re not likely to ever get it from that point on. The key to making it through an SHTF event is to already have the things you want and need.

It’s possible that the world won’t go out with a bang (event) so much as a whimper (process). A global financial collapse may have begun 15 years ago with the tech bubble and crash of 2000. While it appears that our economy plateaus or even rallies for a short time since then, it seems to me like we’ve been on a trajectory of steady economic decline ever since 2000. The years 2001 and 2008 saw the greatest losses in stock market history. Much has been written about this 7-year cycle, with warnings of a bigger crash to come in 2015.

An SHTF process wouldn’t come about suddenly like an event would. Instead, it would take years or decades to play out — a slow, steady decline. Money gets tighter gradually. There may be a series of bubbles that burst, but we ride them out. Businesses adapt by running “leaner,” squeezing more productivity out of fewer employees. Families adjust by taking fewer vacations. Many people are out of work, and those who have jobs have been cut to part-time so employers don’t have to pay for the benefits that full-time workers get. First and second-world countries start looking more and more like third-world countries. We find ourselves like a frog in a beaker of water on a bunsen burner. The heat gets turned up so gradually that the frog doesn’t react to the changes — and then he finds himself thoroughly cooked.

Unlike an event, an SHTF process could give you years and years of opportunity to stockpile the things you want and need. That’s the good news. The bad news is that if (when) you find yourself out of work, instead of adding to your supplies, you start tapping into your preps to get by until the next job comes along. But it doesn’t. And what you can’t eat you sell in order to get money to meet your family’s needs.

An SHTF process is not a pretty picture. Slow death never is. Yes, you are better equipped to deal with the problem than those who don’t prep, but it just delays the inevitable.

So what is the key to surviving an SHTF process? Sustainability. You will need self-reliance skills, the kind of mojo that the pioneers had 150 years ago. Do you know how to grow and preserve food? Raise animals? Use and repair tools? Prepping isn’t just about storing stuff. The best preppers would say that it isn’t even primarily about stuff. It’s about skills.

Which one will it be?


Of course, your guess is as good as mine. Many people lean toward process but are strongly aware that it could be an event and that event could occur tomorrow. Don’t let that worry you. Rather, do what you can while trusting you will be prepared enough to survive whatever comes along.  At the beginning of each year look at where you are, re-consider where you want to be and set priorities for the year. Yep, that’s what you’ll be doing in the coming week.

Whatever your SHTF scenario, make the most of your time by getting (right now) the top priority items that you need to ride it out, and continually work on building the skill sets that you will need to sustain yourself and your loved ones through tough times ahead.