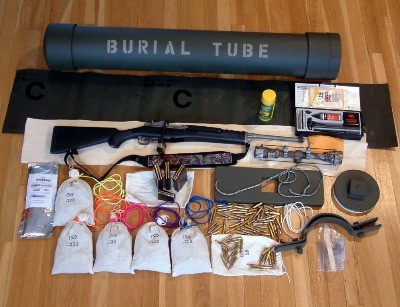 There’s an old proverb that says not to put all your eggs in one basket. When it comes to storing survival supplies, this proverb rings true. By keeping all of your supplies inside your home (or at any one location) you are setting yourself up for disaster.

This is where survival caches come in. Coming from the French word for “hide”, a cache is a setup that allows you to hide some supplies in a separate location. There’s a lot of strategy that goes into choosing where to put a survival cache and what to put in it. On the one hand, you want your survival cache to be difficult to find so it’s not discovered and stolen. On the other hand, your survival cache needs to be easily accessible, especially if you plan on accessing it during a bug out scenario.

Since most people can’t afford to fully stock multiple locations with duplicate supplies (although you should if you can afford to), the question of what goes into a survival cache becomes relevant as well. To help you decide what to put in it, what container to use, and where to hide it, consider some of the following ideas.

What to Put in Your Survival Cache

Before you decide what container to use, decide what items you’re going to put in it so you’ll know what size you need. So what survival items should you put in it? Basically, the same things you’d put any survival kit. While the contents of your survival cache will vary depending on your location and specific needs, here are a selection of items to consider:

Of course, this is just the bare minimum. The rest is up to you.

What to Use as a Survival Cache

Of course, there are many other options. Whatever you decided to use, consider sealing it inside one or more contractor bags just for good measure. One advantage of doing this is you make it look like nothing more than a bag of garbage to anyone who discovers it. Add lots of crumpled up newspapers to the bag so it looks even more like garbage.

Where to Hide a Survival Cache

Once you’ve put together a survival cache, the next step is deciding where to put it. As I already mentioned, you’ll want to find a place that is both accessible and hard for unwanted snoops to find. Of course, the hiding spots you have available will depend largely on where you live, but here are a few ideas: