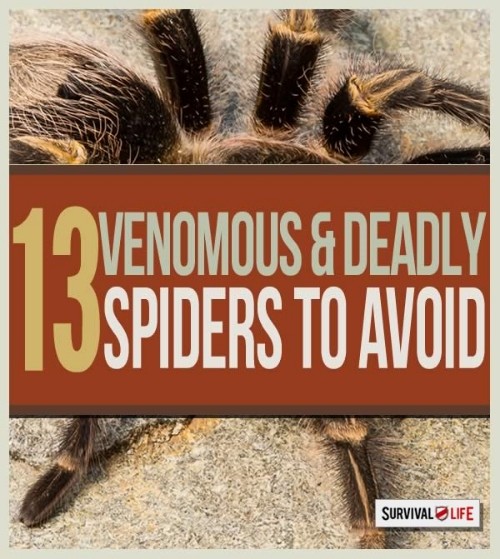 Bugging out in natural disasters or SHTF situations means you have to try to survive out in the wilderness. You may find safety in a bug out cabin or decide to simply set up a camp. However, being out there exposes you to a different set of problems, such as potentially deadly spiders and other critters.

With shelter, food, clothing and water secured, you also have to be ready for the creatures in the forests, mountains and woods. Spiders might not seem to pose any threat but in reality, there are species of the eight legged arachnid that are dangerous.

The sight of spiders is good enough to scare most people but a survivalist has to be rational enough to try and determine what kind of arachnid he is faced with. Hence it is important to know how to identify a venomous spider in order to protect one’s life.

Here is a guide to the most dangerous spiders to help you out. We also added a chart to make identifying them easier. It’s important to know that some venomous spiders can also come into your home and hide there, so just don’t assume you’re safe just because you’re in familiar territory. Tarantulas – the archetypal big hairy spiders that have been the terror of arachnophobes since time began. The name comes from a Spanish dance, which apparently is how people jumped around when bitten by one of these critters. Unlike the smaller spiders on this list tarantulas are mygalomorphs, which means their twin fangs point downwards and have to be stabbed into the prey, rather than the pincer like action of most smaller species.
But everybody knows that despite their terrifying demeanor, tarantula bites aren’t so bad, right? Well it may be true that most tarantula bites are no worse than a bee sting, however the Poecilotheria genus of spiders are renown for having a particularly nasty bite, none more so than Poecilotheria ornata – the fringed ornamental tarantula. The bite from one of these is reported to have caused excruciating pain, and extreme muscle cramping in some cases. One bite victim ended up in the emergency room after experiencing severe spasm and chest pains.
So whilst there have been no confirmed fatalities from this tarantula it certainly carries a potent venom and injects it by the bucket load. This is a rather uncommon spider, it is a member of the black widow family and is highly venomous. According to all literature, this spider is indigenous to south and central Florida. Survive Outdoors strongly speculates that this spider is increasing its range. We have also found in the last 10 years an increase in bites from venomous spiders and venomous snakes that are not indigenous to the area. This is due to the buying and selling of venomous species over the Internet. As well as importing from other countries. This is a dangerous practice and hopefully soon stopped.
The venom of all lactrodectus species ranges from 10-25% more potent than a rattle snake. However, the amount of venom that it delivers is much less. Its venom is a neurotoxin which causes sustained muscle spasm rather than local tissue injury. Usually outcomes are very good, however there are reported deaths in the very young and very old with this bite. No, this little guy doesn’t ride the trains, eat cans of beans or ask people for spare change. In fact, there is a lot which remains unknown about this particular species of spider and debates over its threat to humans are ongoing. That said, some studies have suggested that most of the bites attributed to Brown Recluses in the United States are actually from Hobo Spiders. This is because it is believed the bite of this particular spider can cause necrosis (breaking down of skin and tissue) although on a lesser scale than that of the Brown Recluse. Other reported symptoms include headaches, tiredness and vision problems. Even though the Black Widow may have a better known name, the Mouse Spider is actually quite venomous. Also, these spiders are in nearly every country and environment imaginable. The female is black and the male is dark brown or black with a red head area. The venom of the Mouse Spider is similar to the venom in a Funnel-Web spider. This spider is highly aggressive and will attack when it feels threatened. Location: All across Australia. It has spread via exports from Australia to New Zealand. It’s also been spotted across Southeast Asia and Japan.
Body size: Females 0.4 inches (1 centimeter), males 0.1 inches (3 to 4 millimeters)
About 250 people receive antivenom for redback bites each year. About 80 percent of bites have little to no effect, and most of the other 20 percent are painful for about a day but are not serious. The rare serious cases can include symptoms such as rapid heartbeat, headache, vomiting, and insomnia.
No fatalities have been recorded since an antivenom was introduced in the 1950s.
Redbacks don’t stray far from their webs, and most bites have occurred when people came into direct contact with the webs. The Brown Widow spider, like its cousins the Black Widow, Red Back Spider, and Katipo are spiders that carry a neurotoxic venom which can cause a set of symptoms known as Latrodectism. Like many spiders, widows have very poor vision, and they move with difficulty when not on their web. The Brown Widow spiders have relatively spindly legs and deep, globular abdomens. The abdomen has one or several red spots, either above or below. The spots may take the form of an hourglass, or several dots in a row. The male widows, like most spider species, are much smaller than the females and may have a variety of streaks and spots on a browner, less globular abdomen. The males are generally less dangerous than the females, but will bite if the web is disturbed and the spider feels threatened. Length: 0.25 to 0.5 inches
Locations: throughout North America
The Yellow Sac Spider enjoys living inside homes and outdoors under logs or thick leaves. They are called “sac” spiders because they do not weave webs. Their young are created in silken tubes or sacs in the corners of walls and ceilings. The Yellow Sac Spider’s venom can leave human victims with lesions and dead skin tissues. Their prey includes other spiders — no matter their size— insects, and insects. They also sometimes eat their own eggs This highly venomous spider is thought to be the most dangerous Recluse Spider. It is found in the USA, from the Atlantic to the Pacific coast, and mainly in the south, in an area with radius of 2000 km measured from the center of Arkansas: south-eastern Nebraska, Kansas, Oklahoma, Texas, Louisiana, Arkansas, Missouri, Kentucky, Tennessee, Mississippi, Alabama, northern Georgia, southern portions of Ohio, Indiana, Illinois, and Iowa.
This species measures 6 to 18 mm (1/4 to 3/4 inch) in body length. A dark violin shape is located on the top of the leg attachment region with the neck of the violin pointing backward toward the abdomen. When most spiders have 8 eyes, Recluse Spiders has only 6 arranged in pairs – one pair in front and a pair on either side.
The Brown Recluse Spider’s venom can cause significant cutaneous injury with tissue loss and necrosis, and can be deadly to humans. However, though it is very dangerous to people, it is not an aggressive species and it only bites when threatened. Latrodectus mactans, or Southern black widow or simply black widow, is a highly venomous species of spider. They are well known for the distinctive black and red coloring of the female of the species and for the fact that she will occasionally eat her mate after reproduction (hence the name – Black widow). The species is native to North America. The venom might be fatal to humans.
Although these spiders are not especially large, their venom is extremely potent. They are capable to inject the venom to a point where it can be harmful. The males, being much smaller, inject far less venom. The actual amount injected, even by a mature female, is very small in physical volume. Wolf spiders belong to the family Lycosidae, a large and widespread group that is found throughout the world. They are named for their wolflike habit of chasing and pouncing upon prey. About 125 species occur in North America, whereas there are about 50 in Europe. Numerous species occur north of the Arctic Circle. Most are small to medium-sized. The largest has a body about 2.5 cm (1 inch) long and legs about the same length. Most wolf spiders are dark brown, and their hairy bodies are long and broad, with stout, long legs. They are noted for their running speed and commonly occur in grass or under stones, logs, or leaf litter, though they may invade human dwellings that harbor insects. Most species build silk-lined, tubular nests in the ground. Some conceal the entrance with rubbish, whereas others build a turretlike structure above it. A few species spin webs. Wolf spider eggs are contained in a gray silk sac attached to the female’s spinnerets, or silk-producing organs, so that she appears to be dragging a large ball. After hatching, the young spiders ride on the mother’s back for several days This is a spider that is highly dangerous, but lives in such a remote region that few recorded cases of death are known. Sadly, the people it kills are rarely in a position to call home and tell #people. It lives in the driest regions of Africa and South Asia. Just a tiny amount of venom will clot your blood which increases your blood pressure to the point where you sweat blood (it comes out of nastier areas too) before dying from cardiovascular failure The deadly Australian funnel web spiders owe their name to the conical webs these creatures use as burrows or prey traps. In fact, there are three different families of funnel web spiders, only some of which are dangerous to humans. The Hexathelidae family — the dangerous variety — includes about 40 species in Australia, such as the notorious Sydney funnel spider and its tree-dwelling cousins.
These spiders are usually black or brown; sport a shiny, hard, slightly hairy covering called a carapace on the front of their bodies; and range between 0.4 and 2 inches (1 to 5 cm) in body length. Nocturnal creatures, they prefer humid climates. Most live on the ground, but some dwell in trees. The bite can be life-threatening, especially in children, but is usually nonfatal if antivenom is administered When a spider’s scientific name is derived from the Greek for murderess (Phoneutria) you can guess it’s going to be trouble and this is certainly the case for the wandering spiders. According to Guinness World Records the Brazilian wandering spider (Phoneutria fera) is officially the world’s most venomous spider. It is capable of injecting a powerful neurotoxin which is nearly 20 times more deadly that that of the Black Widow spider if it gets into the blood stream. That is as potent as the venom of many deadly snake species and the effects are similar. The symptoms of envenomation include a loss of muscle control leading to breathing problems which can result in complete respiratory paralysis and eventually asphyxiation.
But there are two other major side effects to the wandering spider’s bite; firstly there is intense pain and secondly, if you happen to be male there is the four hour hard on. Yes, you did read that correctly – the bite of the Brazilian wandering spider can cause an erection that lasts for several hours, unfortunately it is also painful.