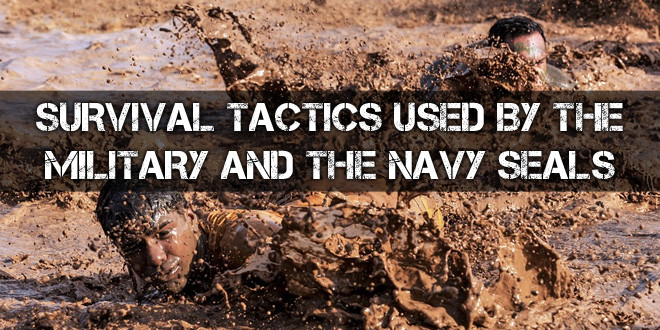 When you think of the word ‘survival,’ what usually comes to mind?  Making a fire out in the woods, setting up a lean-to shelter with vines and sticks, setting up traps and snares to catch small game, and procuring water might be a few things that come to mind, right?

Knowing how to do each of these things is incredibly important for any survival situation.  However, the advanced survival tactics used by the U.S Military (including the Navy SEALs) demonstrate that there’s much more to survival than just starting a fire and building a shelter.

The primary difference between these ordinary survival skills, and the survival skills learned by the servicemen and women of the U.S Military, is that the military’s learned survival tactics take personal protection and defense into account.

In short, the U.S Military and especially the Navy SEALs approach survival in a different and deeper way than most survival classes or disaster preparedness classes tell us to.  Let’s take a look at the biggest reasons why:

As a result of the advanced and complex training of the U.S Military and Navy SEALs, you may believe that the survival tactics they learn and employ are at least a little more intricate.

However, this could not be any further from the truth.  On the contrary, the military has learned that simplicity is required for survival.  If you want to survive, you have to keep things simple, and then become as good as possible at being simple as well.  By overcomplicating what needs to be done in survive, you’ll only waste valuable time and energy and be in a far worse state as well.

This could be fatal in a disaster scenario where you constantly have to be on the lookout for those who are harming you and are in a more vulnerable position to fight.

The military genius Sun Tzu was the one who said that war is not about fighting, but about deception.  A military commander can win against a materially or numerically superior force through deception and evasion tactics such as decoys, feints, disinformation, and diversionary attacks.  These kinds of tactics have been used for thousands of years and continue to be used to great effect today.  You can use them as well.

It doesn’t matter what kind of weapons or training you have or how many people are on your side.  You should avoid armed conflict as much as possible.  Even though soldiers are trained for combat, they too follow this principle as well.

This is why evading is more important than fighting.  Granted, you should still learn how to fight should worse come to worse, but evasion skills are arguably even more important.  Learn how to stay away from those who seek to harm you, and strongly consider a temporary surrender if you are severely outnumbered or outgunned to the point that fighting is hopeless.

As we have touched on already, there are many evasion tactics that the military uses in order to avoid a fight until they find ground or a situation that is more favorable to them, and most of those evasion tactics come through what Sun Tzu said war was all about: deception.

Let’s say you have a relatively small survival group, and a hostile survival group who outnumbers you four to one is nearby.  Since you’re so heavily outmanned and outgunned, an open engagement is not an option for survival.

Instead, you have to look at the situation from a new angle and outmaneuver your opponents.  Keep in mind that since they know they have the numerical advantage, it’s more than likely that they’ll underestimate you.  You can use this to your advantage.

One evasion tactic you can use is to hide.  Camouflage yourself in with the environment and make your camp appear deserted.  In fact, camouflage and staying hidden are two skills that soldiers are taught often in training as a means to avoid capture.

Another evasion tactic you can use is to openly escape but deceive the enemy as to where you are going.  You can send one or two of your number into a car and send that car down the road and cause your opponents to launch a pursuit while the rest of your group makes the escape to better ground, where you can then rendezvous with the rest of your group.

Just because you’ve been captured and taken a prisoner of war doesn’t mean that you’re out of the fight.  On the contrary, the fight is far from over.

You should also learn different escape techniques so that you’ll be able to, for example, get out of your restraints when captured.  Keeping lock picks or small knives concealed on your person is another wise strategy.

If your captors are smart, they will separate you from the other captives so that you don’t have a chance to help one another.  However, it’s still more likely that most people in SHTF situations won’t be aware of this advantage.

IF YOU HAVE TO FIGHT, PREPARE FOR SHORT DISTANCE ENGAGEMENTS

You may believe that you’ll be able to defend yourself with nothing more than a scoped bolt-action rifle.  You figure that you’ll be able to keep yourself far away from your opponents while pinning them down.  The truth is that if you honestly believe this is how fighting is going to be in a SHTF scenario, you’re going to be one of the first ones killed.

The soldiers of the U.S Military and Navy SEALs are taught to engage targets at within twenty to thirty meters at most.  Engagements up to a hundred meters or more are left to the marksmen.  If anything, any kind of an armed confrontation that you find yourself in that requires you to use deadly force is going to be up close and personal.  You may end up using your fists rather than your gun.

As we have seen in all of the wars and armed conflicts going on around the world currently and within the last few years, combat is up close and personal.  That’s why detecting a threat before they come to close to you is going to be imperative to your survival, and it’s also why evading instead of fighting like we just talked about is so important as well.

Train yourself in hand-to-hand combat, in using a knife for immediate self-defense, and in close range scenarios with your firearms.

HAVING A TEAM STRATEGY

The military is all about team strategy.  One soldier never goes it alone. Even snipers have spotters and have to rely on coordinates and instructions given to them by a far away base.

Your strategy as a team, even if it’s only you and your immediate family, should be no different.  Yes, you’ll have to strategize things much differently than if you were on a ten to twenty man team.  If no one else in your family is capable of handling weapons (perhaps you have young children, for example), then the job of self-defense and security is going to be left to you.  You can still assign other important tasks related to your survival to others, but the weapons handling and defense can be left up to you.

If you do have people in your survival group who are capable of handling weapons, then you can easily come up with a fighting strategy with them as well.  If you have four people in your fighting group, for instance, you can make a diamond formation (one person up front on point, two behind them and to the side, and then one more person forming the rear directly behind the first person) when advancing through unknown territory.

TAKE TWO OPPONENTS OUT OF THE FIGHT WITH ONE SHOT

There’s a reason why the military equips its soldiers with weapons that fire lighter rounds like the 5.56×45 over larger ones with more stopping power: when a man is hit and wounded, it doesn’t just put him out of the right, but it puts one or two other men out of the fight as well because they now have to tend to their wounded comrade and carry him away.

All the same, not only should you deeply consider having to go to war rifles that fire lighter cartridges, but aiming to wound an opponent rather than kill him outright will force one other opponent to tend to him.  Essentially, you can take two opponents out of the fight with one shot.  Knowing this tactic will give you a strong advantage when multiple assailants are attacking your property.

In the end, though, you should strive to avoid an armed confrontation in the first place.  We’ll talk about this later.

HAVING THE RIGHT SURVIVAL MINDSET

Ultimately, having the right survival mindset is everything.  It doesn’t matter how much survival gear you have or how well trained with it; if you aren’t in the mindset that you need to survive, nothing else matters.

Throughout and well beyond their training, soldiers and especially SEALs are constantly taught to be in the right mindset.  Contrary to what many people believe, the instincts that you have naturally will not be enough.  In order to get yourself into it, you need to constantly improve with all of the survival education that you can get.  And when we say ‘survival education,’ we mean much more than simply starting fires and setting traps and snares.

Educating and then training yourself based on what you learn is what will put you in the right mindset to survive.  In other words, your survival preparations must be an ongoing process where you are constantly learning new things.  It’s not just a read a survival book and maybe take a class once and call yourself prepared kind of deal.

There are a lot more examples that we could give for how military survival tactics enhance the survival skills that we commonly read on the internet or learn about in classes, but space does not permit us to go into those now.  What you have read about here in this article are the most important ones.