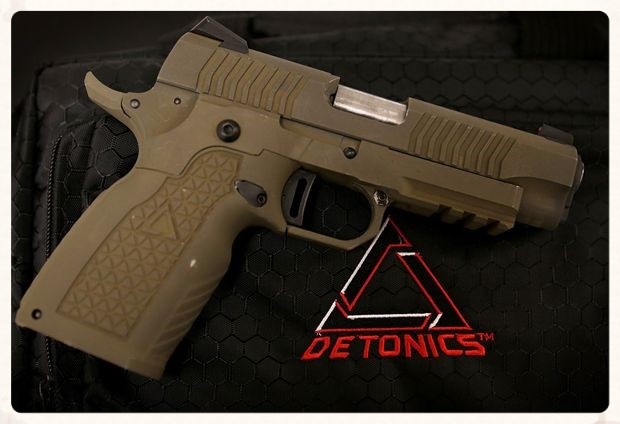 St. Louis Post-Dispatch writer Tim Barker just did a story on the small Milstadt, Illinois company that some people seem to think has a real shot of being a serious contenderfor the Army’s Modular Handgun System contract.

At first glance, it seems absurd to suggest that a small company on the outskirts of St. Louis could be a serious player in the race to provide the U.S. Army with its next handgun.

This is, after all, a major event in the realm of military weapons — having happened only twice in the past 100 or so years. And it’s expected to draw the attention of the industry’s most powerful names, including Smith & Wesson, Beretta, Ruger and Glock.

And then there’s tiny Detonics, a five-person operation in Millstadt that fashions itself more tech company than gunmaker.

They’ll be facing deep-pocketed competitors with lobbyists, squads of marketing and public relations staffers, and friends in Congress.

“There’s just no comparison to what these large companies have in the way of resources,” said Bruce Siddle, Detonics’ chief executive.

But what his company does have, he said, is a gun that would give the military what it craves — a weapon with a modular design offering easy customizing to fit different hands as well as different missions. The ideas behind it even prompted a 2013 invitation from the Army’s modular handguns group, which asked for a presentation on the company’s efforts.

Barker contacted me about this article, so feel free to read the whole thing to see my comments.

There is still another industry day ahead to answer questions about the contract, and it appears that an official Army RFP is still several months down the road, providing the Army doesn’t kill the program entirely as they have other small arms contracts in recent years.

What I can tell you at this time is that the STX is the only truly modular, all-metal handgun in contention at this time that meets the MHS requirements, and that’s not a small thing.