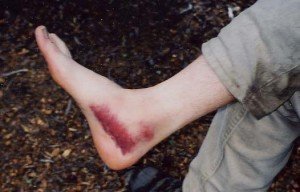 Even if you can’t treat it, you can probably grasp the danger of broken bones, severe diseases, or stab/gunshot wounds. The dangers of internal bleeding however are typically harder to understand since they’re not as easily seen. Heck, in most movies internal bleeding is code for “the doctor won’t be able to save him”! Fortunately in real life this is not so, but nevertheless is is important for you to know what internal bleeding does and how to identify and treat it properly.

Disclaimer: I’m no doctor, nor did I play one on TV at any point. Internal bleeding can become very serious quickly, so if you suspect that this is an issue please seek immediate medical attention! This post is meant only for situations where no medical help is available, and should only be treated as my opinion and not any kind of sound medical advice.

As I mentioned most movies tend to treat internal bleeding like some sort of mysterious affliction that can kill anyone regardless of treatment, but in all likelihood you have suffered from it a time or two yourself! If you’ve ever suffered from even the most minor bruise, you have had internal bleeding which discolored the skin and left the area tender to the touch. Of course, more serious cases will be much more dangerous than a mere bruise, but it is important to know that not all cases of internal bleeding are inherently deadly.

Serious cases and the damage they cause

That said, what we’re looking at here are specifically the more dangerous kinds of internal bleeding, which may not be as obvious as a bruise. These are typically caused by trauma in a disaster situation, though some illnesses and conditions (brain aneurysms for example) can also result in internal damage and blood loss. Any kind of trauma, from a gunshot to a stab wound to a fall can cause internal bleeding. The more severe the trauma, the more likely that internal bleeding will show immediate symptoms, while a less severe incident with lesser blood loss might not be apparent until later.

Regardless of the severity of the actual injury, blood seeping from vessels is never a good thing and can cause a great deal of damage depending on which vessels are broken and where the blood pools. The most immediate and obvious issue is the typical symptoms of external blood loss. Unsafe drops in blood pressure, skin clamminess, and even shock can result from blood leaking out into the cavities of the body. Beyond that are symptoms exclusive to internal bleeding:

How to identify internal bleeding

Some types of injuries almost always cause internal bleeding. A gunshot to the gut, for example, is definitely going to make you bleed! However other trauma like falling or getting tackled by a crazed lunatic could still cause that blood loss without any obvious external signs, at least initially.

First off, you should pay attention to any signs of bruising in areas that were otherwise unaffected by the injury. This may indicate that loose blood is pooling near the skin and showing through the layers, similarly to a regular surface bruise.

Secondly, you should be extremely careful to watch for sensory problems, a persistent headache, or any other odd symptoms that might be related to blood in the brain. Even if you otherwise appear fine, long-lasting headaches, sudden and frequent migraines where you had none before, or nausea that is persistent long after any sickness should have been cured.

Thirdly, keep an eye out for blood in any bodily excretions. Vomit, urine, and poo all show signs of blood present, and any amount of blood in them is a very bad sign. Any blood in urine or vomit will probably be red to some degree, while the color in feces varies between black, tea, or red. Vomit indicates blood in the stomach or the throat, while urine and feces can both indicate blood in the intestines or digestive organs such as the kidneys.

Finally, look for any signs of the symptoms noted above, particularly pain in joints or muscles or any kind of swelling. You’ll have to use your own best judgement (joint pain isn’t odd to an arthritis sufferer, for example) and be careful to notice any persistent issue that seems strange.

How do you treat it?

First the bad news: certain severe internal bleeding problems require surgery from a competent doctor. No amount of care or medication will save them, and they will suffer the full extent of the damage or death that the pooling blood will cause. Unless you have a surgeon along for the ride with you.

However, there is some good news to counterbalance the bad! Although some injuries require surgery, other cases of internal bleeding are quite capable of healing themselves if the patient is properly cared for until they recover. Proper care in this case largely involves treating someone for shock, giving the body additional time to recover. Unless the head, neck, or back were harmed during the traumatic incident, elevate the patient’s feet about a foot off of the floor and wrap them in a loose, warm blanket. Try to keep the head from moving at all, though if the person is vomiting or has blood coming out of their mouth you should set the head on its side to improve drainage. If they’re still conscious,  try to keep them calm to avoid raising their heartrate and bleeding faster. Assuming a lack of hospitals or medical care, at this point you merely keep them comfortable (don’t give water or food unless dehydration becomes a danger or other factors demand it) and hope that the inner wounds heal.

I should note that unless there is a strong medical reason for it, anticoagulants and blood thinners are very bad for a patient suffering from internal bleeding. This includes many prescription medications, but it also includes Aspirin.  If you take these medications regularly, I would advise you to ask your doctor about the appropriate course of action. For everyone else, don’t take them in that situation unless a trained medical person instructs you to.

Internal bleeding is a nasty business, but it’s not the death sentence many think it to be. Know how to identify it and treat your patients so that their body can heal the damage and hopefully save their life.