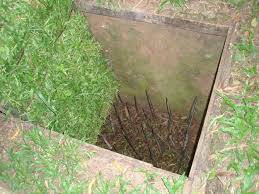 Booby traps are devices set up with the intent to surprise, harm, or even kill a unknowing victim. They are triggered by the presence or unwitting actions of another.

Booby traps have been used since ancient times. Cave drawings indicate even prehistoric humans used them as a means of capturing prey, such as in “pit falls” where a large hole is dug and spikes placed inside. The hole is then covered.

Historically speaking, booby traps do not win wars. They are, however, considered a key element in psychological warfare. Also known as PSYWAR, psychological warfare is by definition, something that is done to either deceive, manipulate or otherwise influence an opponent and to incite hopelessness, fear, despair and loss of morale. Used extensively in WWII and Vietnam, booby trap effects have caused many surviving soldiers long-term pain and trauma.They can also be an effective early warning system. However, they can also cause civilian casualties, be inadvertently set off by friendlies or neutral people within the vicinity, and sometimes even by animals or natural events. They are also dangerous to set up if using any explosive materials. Caution should be used. One way to hopefully limit unnecessary injury would be to secure the perimeter with non lethal alert devices. Hopefully once someone has realized they are approaching traps, they will turn around. If they continue, then chances are they are either hostile or being driven that direction by hostile forces.

Booby traps come in two main categories: anti tank, and anti personnel. We will start with the former.

Automatic road blocks work much in the same way as a regular trip wire except that they designed in ways that impede traffic and damage vehicles. The end of a strong wire is attached to a secure point on one side of the road. Perhaps looped around a large tree. On the other side it is attached to something to be pulled into the road. A common option is to attach an anchor to another tree and chop it almost to the point of falling. The cord must be taut and high enough that a vehicle will pull it in the correct direction and not run over it. The cut tree is pulled down into the road, damaging the vehicle and effectively creating a road block. This method was employed by the Japanese when fighting the Allied Forces in the Philippines. It can be effective as a standalone device to slow the opposition, or as onset of an ambush.

Another trip wire mechanism that can be adjusted to block a road, is a simple explosive charge set next to a makeshift retaining wall on a hill or cliff. Rocks, stones, branches and debris are piled behind the obstruction. It may be necessary to route the wire through small anchors to adjust for the angle of the hill. Once armed and triggered, a small avalanche plummets onto the road, injuring and blocking enemy forces.

Caltrops have been used since Medieval times, possibly earlier, as a way to impede incoming troops and damage cavalry and have since evolved into an effective way to combat automobiles. A metal worker can create them quite easily out of small hollow pipes that are bent and welded together. This option allows for more rapid air escape and therefore faster deflation and blowout of the tire; theoretically any metal strong enough and sharp enough to withstand the weight of the vehicle can be used as long as it is fashioned in such a way that one blade is always pointing up.

Even vehicles themselves have been used as booby traps. A charge can be detonated by opening the door, or turning on the ignition (which seems to be popular in the movies). Bombs can also be detonated by impact, where the cars themselves were used as roadblocks. If an armored vehicle attempts to simply pummel through and push the vehicles aside, they explode.

Now we get to the category where most preppers are focusing their efforts. Home invasion protection and anti personnel defensive booby traps.

The most common booby trap as far as prepping is concerned is probably the trip wire. Easy to set up with nothing more than a piece of string and a personal panic alarm. It is easily improvised and can detonate explosives, fire weapons, or activate spotlights for early detection.

Pressure plates can be simple DIY projects, or can be purchased prefabricated. Again, these can be improvised to either turn on lights, sound an air-horn, or detonate explosives. I personally would not attach explosives to these as they are usually placed quite close to your residence as a final warning someone has made it to your door. Some can be quite sensitive and can easily be activated by a dog or other fair-sized animal. If you are placing them further away from your home, or do not care about potential house fire, explosives could be used. One additional and interesting use for these is their ability to be an automatic door opener, if you want a secret entrance and hide it well.

Mobility Denial System (MDS) is a deterring slime that can come in handy (if you can get your hands on any) It is a last line of defense as it will create an impassable surface directly around your home for 6-12 hours. It was invented for the Marine Corps and police riot protection. It is not readily available, however if you were to put your mind to it, you could up with something along the same lines. You want to deter any hostile party, by any means necessary, before they ever get that close to you, and preferably either drive them back or keep them at bay until you can retaliate.

Spikes. They can be as simple as large nails in boards turned upwards around your yard in the tall grass. They could be placed over a hole so that when stepped on with any force, the person’s foot snaps the board, goes into the hole and the nails impale their ankles. In times of war they were often coated with toxic material or feces to promote infection. Some people attach them to stones or logs to create pendulum contraptions that are triggered by a trip wire. Personally I find this a foolish waste of time. A well-trained individual can evade such a device. It would probably take less time to dig small trenches, which might at least sprain some ankles, but to each their own. Spikes on boards can also be weighted and submerged into creek beds and ponds.

Razor wire and barbed wire is another option for underwater depending on how long it stays there. It can also be used similarly to trip wire in heavily vegetative areas where it can be concealed. I’d recommend a matte finish, camouflaged to blend in. In can be used along top fencing, around windows etc… Anywhere you would want to deter someone, perhaps diverting them into even more unfavorable habitat where you have a greater advantage.

Bullets can be set inside a small section of bamboo, atop a firing pin, and buried until just the tip is exposed. If stepped on with any amount of force the bullet explodes.

Hand Grenades. If you can acquire them, all you need is a tin can and a piece of string and duct time and you can secure any door. This is dangerous for the person loading them, but were widely used in WWII and Vietnam. Tie a string around the grenade under the handle. Depress the trigger handle and pull the pin. Quickly and carefully slide it into the tin can. Secure the can somewhere with tape or wedge it tightly. Attach the string to a door handle or use as a trip wire. When the door is open or trap is triggered, the grenade dislodges from the can and detonates.

Remember that booby traps are just one element in the line of defense. Their primary purpose is to slow down the enemy, instill fear, reduce moral, and possibly to injure, maim, or kill. The time these traps may buy you can be greatly varied. Use it wisely and remember, offense and defense are opposite sides of the same coin. You need both or you are broke.

Recognizing the extreme injustice of recent liability suits awarding home invaders large sums for getting injured while burglarizing a house, it could be considered foolish to construct booby traps unnecessarily, regardless of intention or the degree of danger. That being said, I don’t know anyone who wouldn’t use them, or wish they had them to use, when put into a potentially deadly situation.