With spring upon us many will be suffering with allergies. But you may also be suffering from a spring cold.  Seasonal allergies and colds share some common symptoms, so it may be hard to tell the two apart.  Both conditions typically involve sneezing, a runny nose and congestion. There are some differences, though. Additionally, colds usually include coughing and a sore throat, but these symptoms can also occur in people with hay fever who have post-nasal drip. Itchy eyes are common for seasonal allergies, but rare for colds.

Colds and seasonal allergies seem very similar in many ways.  It’s the duration [length] and chronicity [frequency] of symptoms that might help tell the difference. It’s not unusual for parents and even doctors to confuse cold and seasonal allergy symptoms. Young children frequently get colds, and their parents may not always think of seasonal allergies as the reason for kids’ constantly drippy noses. Seasonal allergies may first show up in a child at around ages 4 to 6, but they can also begin at any age after that. And genetics play a role: People with one parent who has any type of allergy have a 1 in 3 chance of developing an allergy.  When both parents have allergies, their children have a 7 in 10 chance of developing allergies, too.

Here are five signs to look for to determine whether symptoms are due to seasonal allergies or a cold.

Consider the time of year.  Colds tend to occur in the winter, and they often take several days to show up after exposure to a virus. With seasonal allergies, the onset of symptoms — the sneezing, stuffy nose and itchy eyes — occur immediately after exposure to pollens in spring, summer or fall. If symptoms tend to show up the same time every year, it may well be seasonal allergies rather than a cold.

Duration of symptoms matters.  The symptoms of a cold typically last three to 14 days, but allergy symptoms last longer, usually for weeks, as long as the person is exposed to pollen, Rachid said.

Color of nasal discharge offers clues.  When she sees a patient with green or yellow mucus, Rachid said, she tends to think the person has a cold or infection. Seasonal allergies usually produce clear nasal secretions, she said, although sinus infections may confuse the picture. Sometimes allergy sufferers develop sinus infections, which can result in yellow-colored nasal discharge.

Any temperature or muscle aches?  Despite the name “hay fever,” seasonal allergies don’t usually cause fever or body aches, whereas people with a cold often have these symptoms.

Notice “the allergic salute.”   Parents may notice children frequently pushing their noses up with the palms of their hands to wipe or relieve itchiness — this could be a telltale sign of seasonal allergies. When trying to determine if a child’s symptoms are due to a cold or seasonal allergies,  ask about the allergic salute. You can also observes the skin on the child’s nose, since the “salute,” when done frequently, tends to cause a small crease at the bridge.

Anyone with a cold may do the allergic salute, but children with allergies tend to do this a lot. It means something is bothering them, and could indicate their allergies are getting worse. 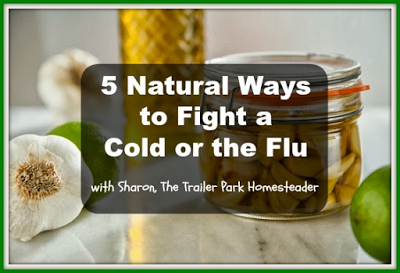 5 NATURAL WAYS TO FIGHT A COLD OR THE FLU

It is that time of year again, the beginning of cold and flu season. Yuck! Although many of us would love to stay inside and avoid all those nasty germs lurking about in public, it is not always feasible.
So, let’s look at a few ways to fight off and relieve the symptoms of a cold or the flu, Naturally:
1. Herbs:
One of the best herbs to stimulate immune supporting white blood cells, T cells, macrophage and interferon activity is Echinacea. This can be taken at the first signs of a cold and will help to ease the symptoms. Boneset is another herb that will help to stimulant the immune system and is one of the most effective herbs to fight a cold or the flu. It promotes sweating and helps your body to release toxins. Although you could steep it and drink as a tea it is best to take it in pill form if possible, as it can be quite bitter tasting. Yarrow leaf is another highly effective herb that helps to reduce fever and is also an antiseptic. It can be steeped and drank as a tea. Peppermint leaf has antiviral properties, promotes sweating to release toxins and is gentle enough to use on children. This is found in pill form or raw leaves for steeping and making a tea as well. Ginger root is a terrific herb that helps to warm chills and fight infection. It is known as the warming herb that helps to also alleviate stomach distress that is sometimes associated with a cold or the flu.
2. Vitamins:
When it comes to taking vitamins, there are two that are a must have. These include Vitamin C and Zinc. Taking 1000 mg three times a day will help to shorten the length of a cold. Zinc helps to stimulate T cell response and helps to prevent a cold virus from replicating. Note that it is not recommended to take more than 50 mg of Zinc daily.
3. Homeopathic Remedies:
Anas Barbariae also called Oscillococcinum, is a wonderful remedy used for onset symptoms of the flu. Some of these symptoms include ear pain, congestion, chills, frontal sinus pain and nasal discharge. It is recommended to take 3-4 pellets three times a day under the tongue.
4. Foods to Help:
If you find yourself fallen ill, many foods have beneficial affects. To break up congestion try chicken soup or miso vegetable soup with plenty of garlic and onion. Garlic and onions both have antimicrobial properties that will help fight infection. Another terrific antimicrobial item is cinnamon. Add cinnamon to applesauce, sweet potatoes, or tea. Foods that are rich in beta-carotene such as sweet potatoes, help to strengthen mucus membranes in the lungs. Other helpful antioxidant foods that help are carrots, cabbage, mustard greens, turnips and broccoli.  One always helpful favorite of mine, is hot tea with honey which helps to soothe a sore throat and helps to reduce coughing.
5. Essential Oils:

It is commonly known that essential oils have multiple health benefits. Using an essential oil diffuser can help prevent other family members from getting sick. Some of the best oils to use are juniper, tea tree, lavender, peppermint, and rosemary. A personal favorite and very effective essential oil for treating cold and flu symptoms is called thieves oil.  Thieves oil is generally a blend of Clove, Lemon, Rosemary, Cinnamon and Eucalyptus.

Remember if you do come down with a cold or the flu, getting enough rest is vital. It is during this time that that your body heals itself. Also don’t forget to drink plenty of clear liquids to help flush out your system. Be sure to avoid caffeine and milk products as these can actually increase mucus production. This will only prolong your illness and make you feel worse.