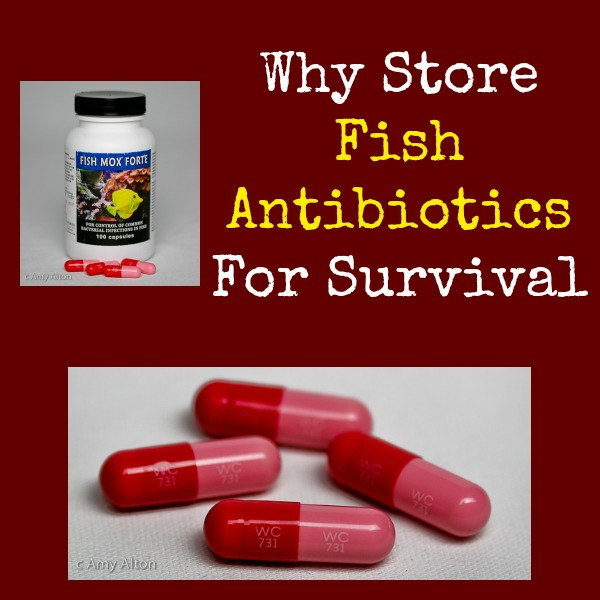 I first learned about fish antibiotics in 2012 when I struggled with a tooth abscess while on vacation in the middle of nowhere.  I was totally unprepared for a bacterial infection and going forward, was determined to stockpile antibiotics for emergency purposes down the road.

As a layman and not a healthcare professional, this was not casual research.  I went to many sources, looked at bottles, and asked a lot of questions.  I came away confident that lacking proper medical facilities, the judicious use of fish and veterinary antibiotics would be safe in a SHTF situation.  And the best part about it?  Fish antibiotics are readily available online at reasonable prices without a prescription.

It was an epiphany.

But as I said, I am not a health care professional and am hesitant to offer even a modicum of advice on this subject.  On the other hand, contributing author Dr. Joe Alton is a medical doctor and is well versed in survival medicine.  In another exclusive article for Backdoor Survival, he is here today to share his knowledge of fish antibiotics and why peppers should include them as part of their long-term survival plan.

Years ago, I wrote the first article by a physician on the utility of certain antibiotics used in the aquarium and bird hobbies. Since then, fish antibiotics have become a part of many medical kits for those concerned about long-term survival. Indeed, a cottage industry has arisen to provide these products.

In my, perhaps, unique position as a doctor and a fish/bird keeper (everything from raising tilapia in ponds, breeding show bettas, and T.D. Bird, our 30 year old African Grey parrot), I’ve had the opportunity to treat both humans and animals that have bacterial infections.

When a human patient had a bacterial infection that required antibiotics, I might give them, say, amoxicillin. When a fish developed fin rot, I might use a product called Fish-Mox. For many years, I never gave it another thought.

Over time, however, I began to realize that there were avoidable deaths in long-term survival. With a large number of people performing activities they were unaccustomed to, such as chopping wood, injuries would occur. Some of these would get infected and could enter the bloodstream, a condition called septicemia, leading to life-threatening consequences. Having antibiotics in the survival medic’s kit could save lives otherwise lost.

This was illustrated in the 2010 History Channel offering “After Armageddon”. In the program, the Johnson family has survived a pandemic and was “bugging out”. They eventually joined a community of survivors. The father injures himself doing activities of daily survival, and incurs a cut that becomes infected. The community has run out of antibiotics and he, a paramedic himself, slowly dies as a result of the spreading infection. See it here (go to 1 hour 21 minutes to see the tragic outcome):

Here is a direct link: https://www.youtube.com/watch?v=OtP80Z08lfg

But how to get a reasonable supply of antibiotics? A sympathetic doctor may give you a prescription for 20 pills, but that would run out very quickly in a survival setting. You’d need to stockpile enough for long-term survival settings.

So I took a second look at some of my fish antibiotics. I examined a product called Fish Mox Forte. This fish medication contained only one ingredient: Amoxicillin 500mg. Nothing there that made your scales shinier or your fins longer.

Investigating further, I found that Fish Mox is produced in two dosages: 250mg and 500mg, the same dosages used in humans. Why would a guppy need the same amount of antibiotic as an adult human (no instructions for fish bowls compared to 200 gallon aquariums)?

Why would companies use the same appearance and identification numbers if they are producing a different, lower grade product for veterinary use? First, it’s likely illegal to do so; second, It’s simple enough to just use a different colored capsule.

I found a number of fish and bird antibiotics that met my criteria, purchasable in quantity and without a prescription. They:

It was clear to me (and verified by readers who worked in the pharmacy and veterinary industries over the years) that they are the exact same products, taken from the same batches produced for humans.

This wasn’t true of all veterinary products. Some had additional ingredients that gave benefits to specific animals, others were in larger dosages that are not advisable in humans (for example, equine meds).

So let’s go back to the important question: Are the fish and bird antibiotics I write about useful additions to your survival medical storage? Some deaths may be unavoidable in a situation without rule of law, but does it make any sense not to have medicines that could possibly prevent an unnecessary death?

If you can obtain antibiotics in quantity now, you should consider it for use in survival settings. Having said this, don’t use them when doctors exist to prescribe standard medications for bacterial disease. You’ll need to be able to recognize bacterial infections (antibiotics don’t kill viruses) to use them effectively. This isn’t always easy. Learn what infections look like and get needed supplies; you just might save the life of a loved one in times of trouble.

I don’t believe in popping antibiotics every time I get a sniffle. And, for that matter, antibiotics do nothing at all to fight virus infections.  On the other hand, being prepared for a bacterial infection is just one more step toward surviving a major disruptive event were there is a likelihood of injury or disease. 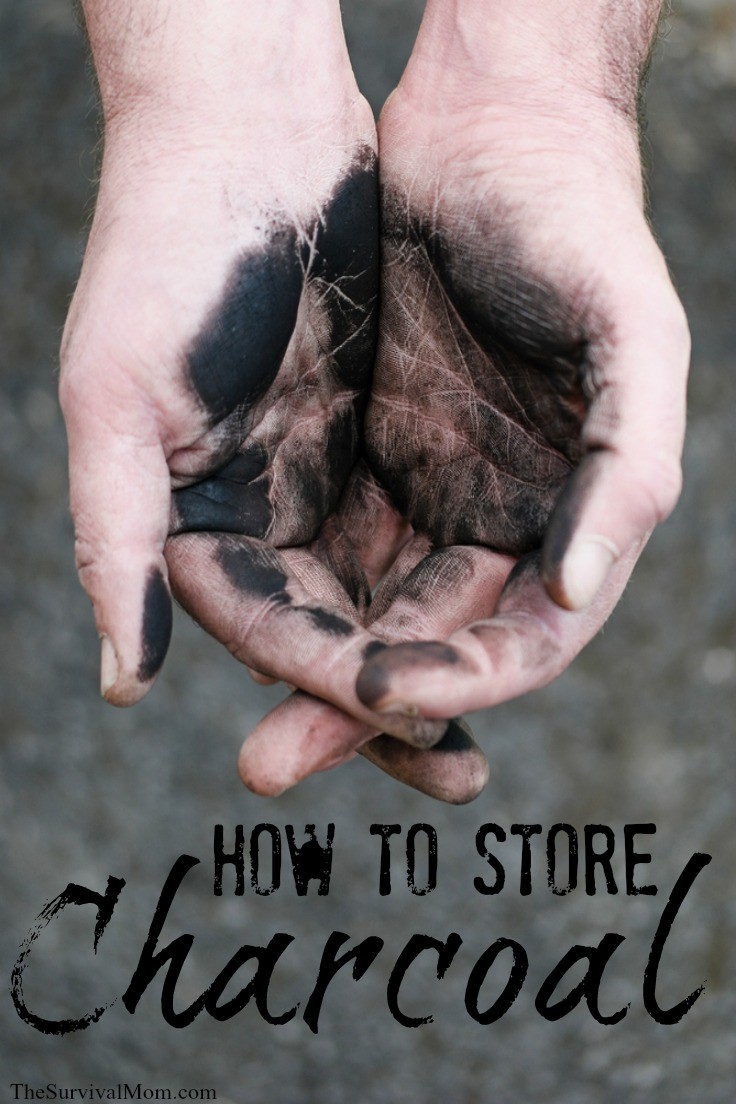 It’s summer! Summer means barbeques, and barbeques mean grills. And grills need fuel. Of the potential fuels for grills, charcoal is the easiest and safest for a prepper to store long-term. Add the fact that it’s cheap, lightweight, and regularly goes on sale in the summer and we have a real prepper winner! And the cherry on top? Unlike propane and many other fuels, you can make your own charcoal if a disaster goes on for long enough and charcoal is a much safer fuel to store.

However, Since it is still a fuel, it’s important to never be careless about how and where you store it. Here are some considerations to keep in mind.

Charcoal briquettes are made from sawdust and wood scraps. As such, they need to be dry to light. A moisture proof container with a tight lid is key.

To keep charcoal dry, you can use metal or plastic containers, butmetal is generally recommended because it is fireproof and not as porous as plastic, which can allow some air and moisture in even when sealed. Since metal, unlike plastic, can rust out if left on a damp surface, it is important to elevate metal cans a few inches off the ground. One common method is putting several bricks underneath or a wooden pallet.

For truly long-term storage, you can use an airtight plastic bucket and seal it shut with caulk to keep the humidity out. For a metal container, use aluminum duct tape. To be extra-sure the charcoal is dry, toss in a handful of silica packs to absorb any stray moisture. Just know it will take a whole lot more of these desiccants than a five pound bag of flour does!

Store your charcoal out of the sunlight in an area that stays cool but not damp. If you have a basement that is either naturally dry or where you run a dehumidifier regularly, that’s a great choice.

Outdoor sheds can be a good place, but be sure the containers are well sealed, off the ground, and not near a window / direct sunlight. You will also need to be sure the shed doesn’t get excessively hot, especially if there is a heat wave.

Using charcoal for fires and cooking is one way to pick up an off-grid living skill. One tool you may want to invest in, to make this easier, is a charcoal chimney. The handy tool is simply a metal container that you fill with charcoal, light, and then quickly heats up the briquettes for use.

If you’re planning to use your charcoal for Dutch oven cooking, experiment with the number of briquettes you place in the chimney. You may not need to fill it completely in order to have enough hot fuel to cook a Dutch oven meal.

Once you know how to store charcoal and stock up when the prices are low, you’ll be ready for outdoor cooking as well as a long-term power outage.

There may be links in the post above that are “affiliate links.” This means if you click on the link and purchase the item, I will receive an affiliate commission, which does not affect the price you pay for the product. Regardless, I only recommend products or services I use personally and believe will add value to my readers.

Category: How To
Tags: charcoal, How to, Storing