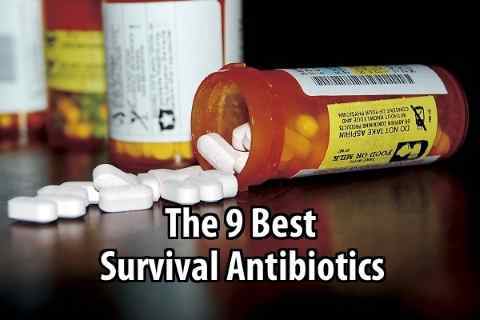 Survival antibiotics are often overlooked by preppers. One reason is because preppers don’t know which ones to buy or even where to get them. Another reason is because they haven’t needed them before so they forget they might need them in the future. That was the reason I hadn’t stocked up on antibiotics until a long, painful week set me straight.

Last year, on an ordinary evening shortly after dinner, my stomach started bothering me. It wasn’t nausea or a normal stomach cramp. It was a strange type of gnawing pain I’d never felt before. I tried antacids and Pepto Bismol, but nothing worked. I finally took some Tylenol and went to bed.

The next day the pain was still there, but now it had moved over to my lower right abdomen. And as the day continued, it got worse. And worse. Pretty soon it was so bad that I decided to go online and do some research. I thought it might be something like a torn muscle or my appendix, but nothing I found really fit my symptoms. That evening, the pain was so bad I could barely move. I had to walk hunched over and take tiny steps. Any type of sudden movement caused excruciating pain. It was so severe that my wife had to help me take my shirt off before bed. The following morning she took me to urgent care.

It was a long day. The doctor asked a lot of questions and felt my abdomen, but he wasn’t sure what it could be so he ordered blood work and a CAT scan. He thought it might be my gall bladder, in which case I would need emergency surgery. But again, he wasn’t sure if that was the problem because my symptoms just didn’t quite fit. Of course, my wife and I were both afraid it could be something life-threatening.

Eventually a radiologist looked at the scans and identified the problem: I had some type of infectious colitis in my ascending colon (similar to diverticulitis). Basically, my colon was severely inflamed by a bacterial infection. They couldn’t say exactly how it happened, but it’s possible I got it after eating some undercooked meat. That’s rare, but it can happen.

This infection could have killed me if not for the medication he prescribed. And what was this wonderful medicine that saved my life? You guessed it. Antibiotics. Specifically, Ciprofloxacin and Metronidazole. After 10 days of taking those, I was good as new! But I wondered, What if I hadn’t had access to a doctor or antibiotics when this happened? I probably would have died. See how important it is to stock up on antibiotics for survival?

Before we move on, a few disclaimers: First, I am not a doctor and I am not giving you medical advice. I’m just repeating some information I learned. I recommend you ask your doctor if he will write you some prescriptions for antibiotics so you can stock up, just in case. There are other ways you can acquire antibiotics. For example, you could buy the ones that are meant for control of common bacterial infections in fish and/or birds. I’m not saying you should consume them, I’m just pointing out how interesting it is that they’re the exact same as the ones prescribed by doctors.

And please, don’t take antibiotics every time you have pain or a fever. Antibiotics are not good for you and should only be taken in an emergency. You should have a good medical book on hand to help you diagnose the problem. And then, only when you are very certain that antibiotics will help, should you take them. I also want to remind you that if you take antibiotics and develop a rash or any other reaction, you should stop taking them immediately. If there is no reaction and your condition improves, continue taking the antibiotic for two weeks, even if you feel better after a few days. Though you might feel better, you want to make sure the infection is completely eliminated.

There are a lot of antibiotics, but I’ve narrowed it down to what I think are the 9 best. These should cover almost 99% of infections. You don’t need to get every single one on this list (for example, Cephalexin, Amoxicillin, and Erythromycin are all very similar, but you might have trouble finding a couple of them).

Here then, are the 9 Best Survival Antibiotics. I’ll begin the list with the two that helped me.

If you don’t want to get every one of these, you should at least get the first three on the list. Those three will cover 9 out of 10 infections you might get. As far as storage, just keep them in the refrigerator. You don’t have to, but it will extend their shelf life. Don’t freeze them, though! That can permanently alter their chemical composition and they might not work anymore. They should continue to be effective for years after the expiration date, with one exception: Tetracyclines (which includes doxycycline). These can become toxic if they get too old.

Don’t be caught with a life-threatening infection when it’s too dangerous to go out or after the stores have run out of antibiotics. They don’t cost much and they could save you or a loved one’s life.