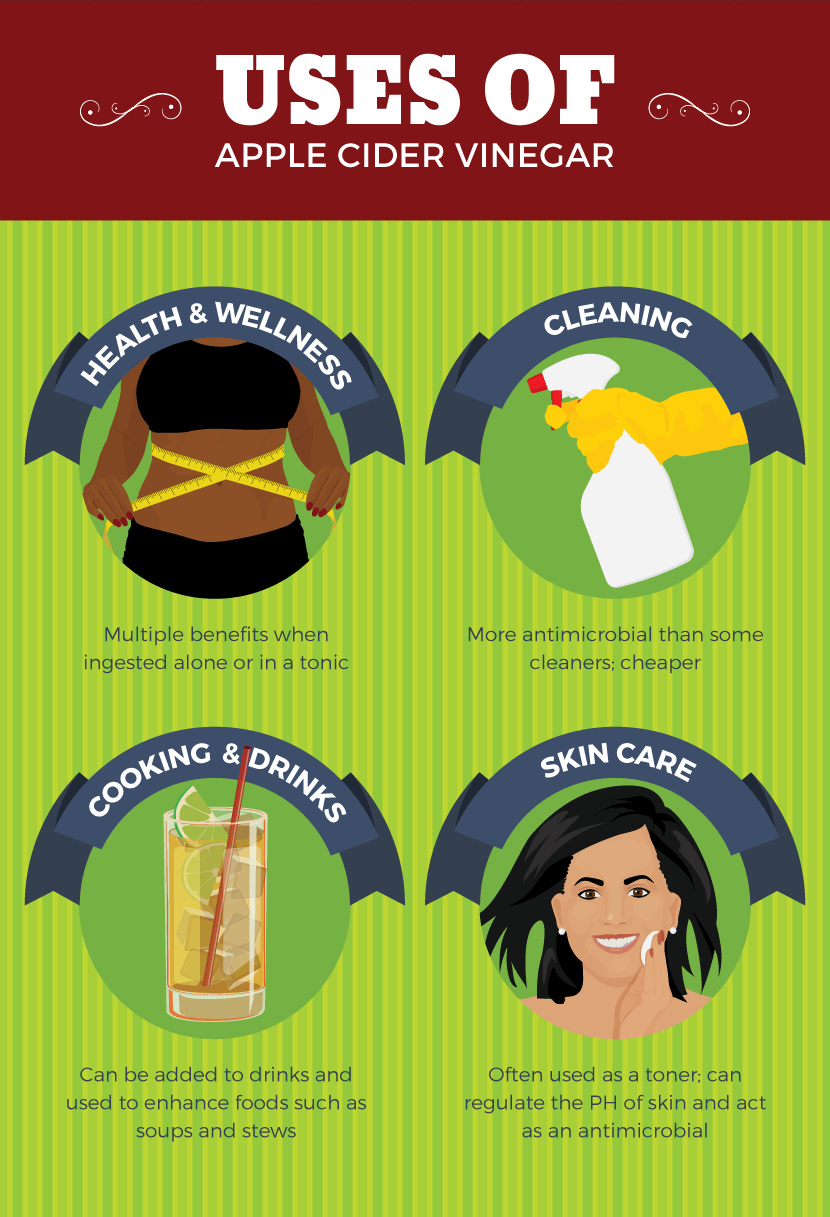 The Benefits of Apple Cider Vinegar

Apple cider vinegar: skin tonic, digestive aid, cancer fighter, and now hangover cure? Did that last one get your attention? As a kid, I only knew apple cider vinegar was used as a cleaning agent by the neighbor kid’s hippie mom. But oh, there’s more. Much more. Research is now revealing that apple cider vinegar has dozens of uses, not only around the home but also in our bodies!

Apple cider vinegar is a great nontoxic cleaner. Let’s start there. Also known as ACV, apple cider vinegar can be used to clean counters and floors, but it is not just a surface cleaner. It is fantastic as a fabric softener, laundry whitener, and toilet bowl cleaner. Beyond cleaning, it has more uses around the home. It will keep ants away and can be used as a weed killer, jewelry cleaner, or homemade dog shampoo! I guarantee there are uses in there you have never thought of. 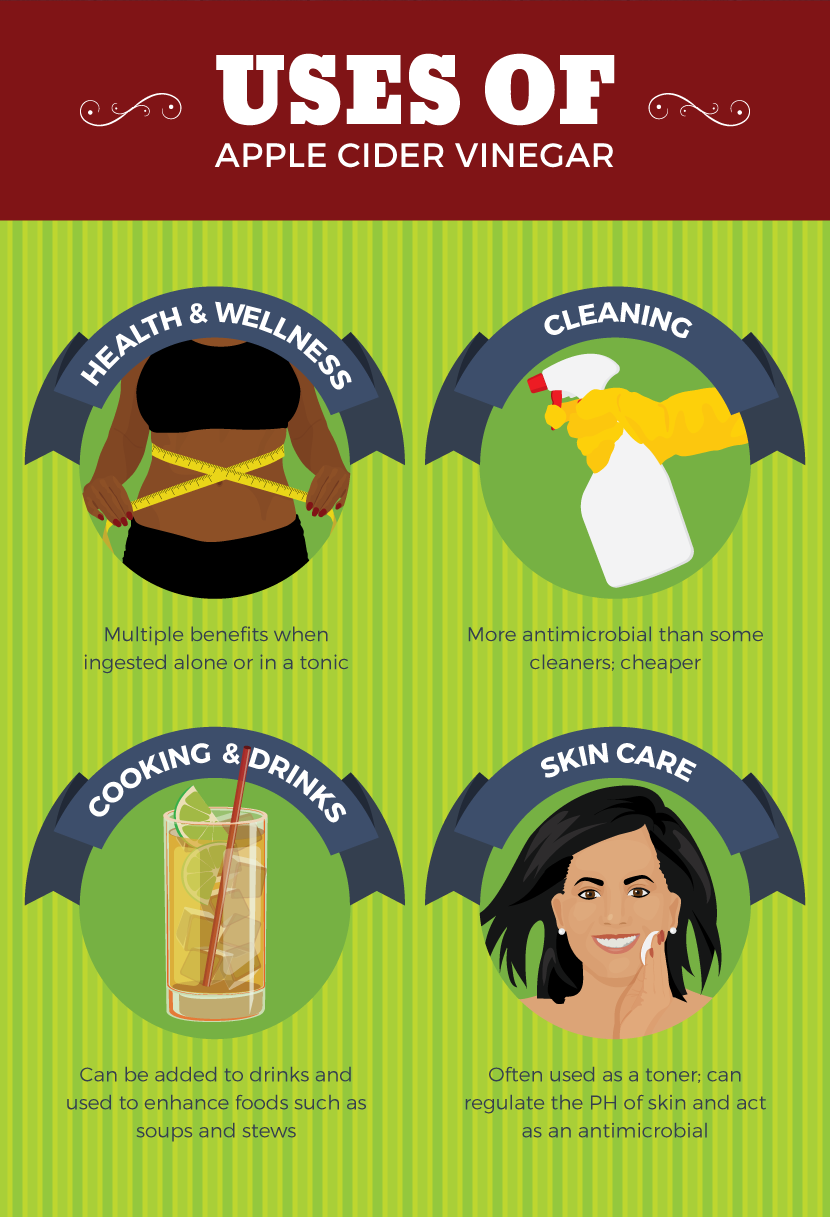 The cleaning functions of ACV are impressive. But the most powerful benefits of ACV have to do with improving and maintaining our health. Apple cider vinegar has a wealth of enzymes and helpful bacteria that can be put to multiple uses inside our bodies. But you need to be aware of a very important ACV fact. There are two types of apple cider vinegar you can buy. You might be tempted by the one that looks clear and pristine. This lovely looking refined ACV is great for cleaning, but not for health applications. The apple cider vinegar that is most beneficial to our insides is the raw, unfiltered version. This opaque version undergoes a double fermentation process that results in the production of boatloads of enzymes. So why is this fermented, unfiltered one better than the clearer filtered versions?

It is all about the mother. The “mother” is the beneficial complex structure of acids that makes the vinegar appear cloudy. Once removed, the vinegar is still a tremendous cleaning agent, but it unfortunately loses many of the highly coveted health benefits during the processing to make it clear.

What is in apple cider vinegar in addition to all those enzymes? Inside that murky maple-colored liquid are iron, potassium, magnesium, malic acid, acetic acid, calcium, pectin, and ash. All of these minerals and nutrients combine to make a deeply potent healing agent. But there are mixed reviews on the content of all these nutrients in ACV. More recent studies suggest that powerful phytonutrients – powerful plant qualities that scientists are only beginning to comprehend – may be responsible for the powerful effects of ACV. Whatever the secret ingredient, raw, unfiltered, mother-filled ACV is worth its weight in gold.

What are all the health benefits of apple cider vinegar? There are dozens and dozens in the literature, but some are more convincing as they are backed by peer-reviewed scientific research.

One of the most convincing studies involving apple cider vinegar has to do with blood sugar regulation. The research revealed that taking 1 to 2 tablespoons of ACV before bed with a small amount of fat resulted in lower morning fasting blood sugar measurements. These studies also showed that those who participated also experienced a weight loss of several pounds over the four-week study. That was a nice bonus!

Another surprising health benefit of ACV is its ability to boost immune function. Researchers have found that the antioxidants found in ACV can reduce damage done by free radicals. Apple cider vinegar is also a strong antimicrobial agent and has been shown to work in some situations where medication would not.

I can’t step away from the health benefits of this wonder elixir until I talk a little about the gut-healing powers of ACV. Having suffered digestive issues for years, and being diagnosed with irritable bowel syndrome, I take special interest in the fact that ACV has been shown to calm the digestive tract. Remember I mentioned above that ACV seemed to have some power over weight loss? Theorists believe that ACV, perhaps the acetic acid content, allows food to be more effectively broken down and absorbed in the intestinal tract. This proved key for the blood sugar study participants’ unexpected weight loss, but also means that ACV can reduce stress on the digestive tract. 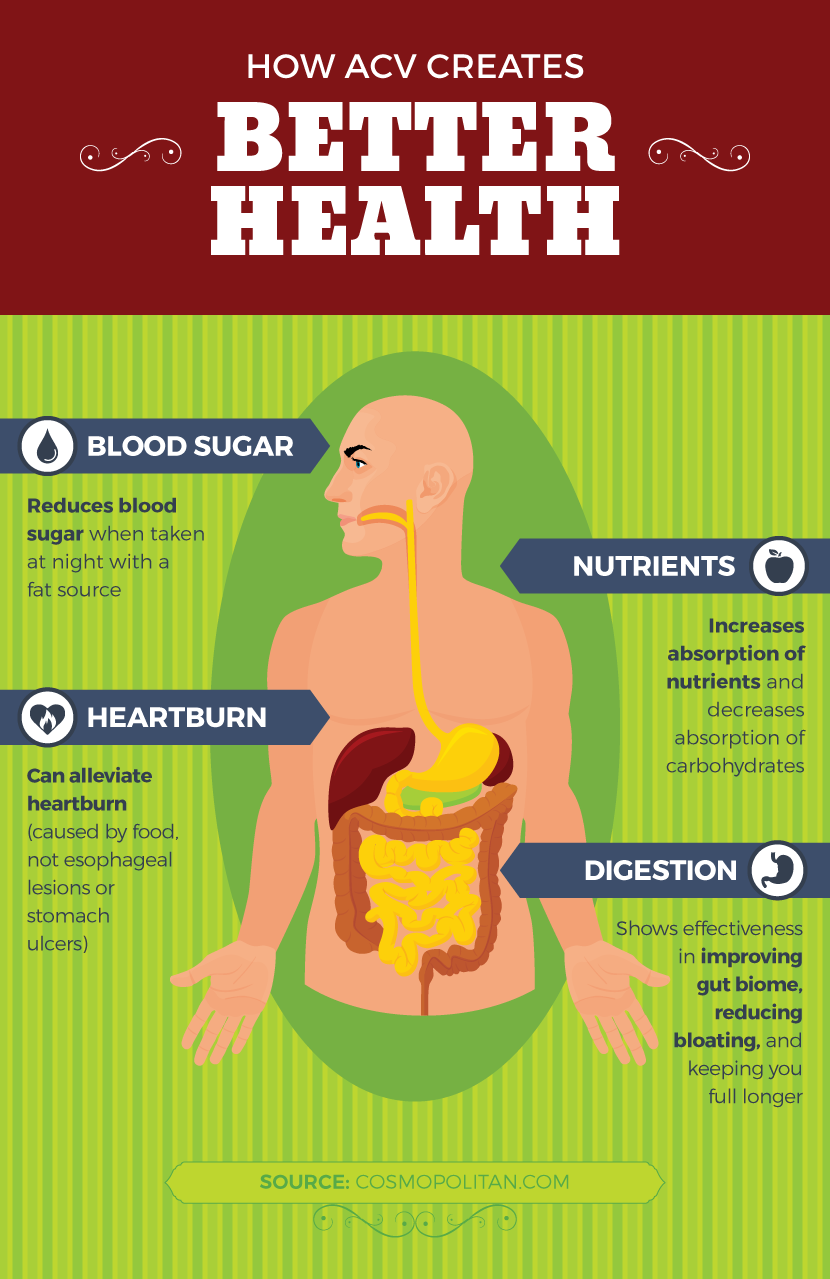 Anything that helps you break down and absorb that piece of broccoli means less stagnation and fermentation in the tract. If apple cider vinegar aids in this process the result is a more highly functioning food processing machine. Also, because of the plethora of enzymes, ACV starts acting on your digestion the minute it hits your lips. Finally, ACV is considered a prebiotic. Prebiotics are “food” for your probiotics. This is very important in keeping your probiotic number high and robust. All of these attributes translate into easier digestion and elimination.

Variations on switchel recipes have been around for years, but now you can find switchel bottled at natural grocers everywhere. But guess what? You don’t have to buy it. You can make it at home for pennies.

The recipe is a simple combination of apple cider vinegar, maple syrup, lemon, and a little water or seltzer to top it up. Combine these ingredients from the recipe below, and you have your very own recovery tonic.

You might know that pure maple syrup, ginger, and lemon have hundreds of benefits between them. Maple syrup is highly anti-inflammatory and loaded with antioxidants. Lemon is excellent for digestion and is rich with vitamin C. Finally, ginger adds the benefits of digestive relief, decreased inflammation, and immune support. I think this switchel tonic has superpowers.

Apple cider vinegar has a litany of uses for health and home. But now, move over kombucha – we can use apple cider vinegar to create a state of hydration and mineral balance perfect for after a night out, a heavy workout, or your workweek.