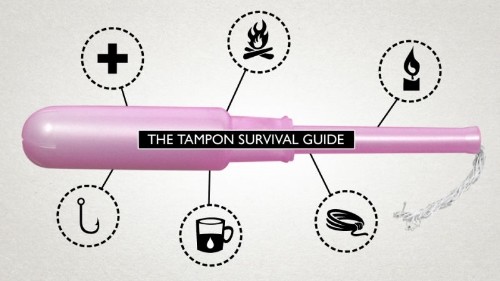 Do me a favor for the next five minutes. Try to forget everything you know about tampons. I know, it’s hard. But pretend that this is the first time you have ever seen or heard of the item below, and it is a new survival product on the market: the Tactical Adventure Medical Preparedness Outdoors Necessity (T.A.M.P.O.N.).

All kidding aside, a tampon really does have a ton of uses to a survivor. One could even argue for including a couple in your survival kit. Ultimately, I’ll let you be the judge.

Before I get into the details of this post, a brief history of the tampon might surprise you.

The tampon is actually regulated in the US by the Food & Drug Administration as a Class II Medical Device. The word “tampon” is a derivative of the French word tapon which means “a little plug or stopper.” My research indicates that tampons were used as early as the 19th century as battle dressings to plug bullet holes. There are even accounts of tampons being used as wound plugs in modern warfare. A friend of mine told me that it’s not uncommon for Army Medics to carry tampons in their med kits. They are also the perfect product for a bloody nose. There seem to be mixed accounts of whether the tampon was used as a feminine product before or after its use on the battlefield.

Regardless of intended use, the common tampon has many practical survival uses. I’ve highlighted a few survival uses below.

Tampons are sterile, come very well-packaged in their own waterproof sleeves, and are designed to be ultra-absorbent — making them the perfect first aid bandage. They can be opened and then taped or tied over a wound as an improvised dressing. And, as I’ve already mentioned, they can be used to plug a bullet hole until more sophisticated medical attention can be administered. Accounts of this use date back to World War I. Many items in modern society were first developed as a facet of military research – tampons may very well be one of these products.

Another excellent tampon survival use is as a crude water filter. While it will not filter out biological, chemical, or heavy metal threats, it can certainly be used to filter out sediments and floating particulates. This would be considered a 1st Phase Filter, which can drastically increase the life and efficacy of your main water filter. You can also use a filter like this before boiling to filter out larger particulates. In this example, I’ve pushed a tampon into the neck of an empty water bottle. I poked a small hole in the cap and then poured in dirty water to filter through the tampon and into the container below.

Nearly everyone knows that cotton makes excellent fire tinder. When the dry cotton fibers of a tampon are pulled apart and hit with a spark or flame, they will burst into a nice steady fire. If you’ve done the right amount of fire prep work, you can easily split 1 tampon into 3 or 4 fire-starting tinder bundles. Add in some chapstick or petroleum jelly, and you’ve got an even better fire-starting tinder.

Yes, I have a tampon in my mouth — don’t laugh! As a last ditch water filter, you can make an improvised Survival Straw from the plastic housing and cotton from a tampon. As you can see in the photos below, just tear off a bit of the cotton and stuff it into the plastic housing. I find it better to leave a little bit sticking out to make the housing pieces wedge tightly together.

Again, this filter will not PURIFY your water by removing biological, chemical, or heavy metal threats, but it will filter out sediments and particulates. This would be a last ditch effort if no methods of water purification were available.

In the photo above I used the string on a tampon as a wick in an improvised candle which I made from rendered animal fat and a fresh water mussel shell I found down by the creek at Willow Haven. After the string soaked up some of the fat, this candle burned solid for 20 minutes while I took the photos and still had plenty of wick left. Pine sap would have also worked as a fuel.

The string attached to a tampon is a cotton twisted cord typically made up of several 4-6″ pieces of twine. Though it’s not much, it is usable cordage. This amount of cordage could easily be used to make a Paiute Deadfall Trap.

I’m sure there are also numerous other uses for small amounts of quality cordage. For example, I also use this cordage in the next Survival Use below…

The blow gun certainly has its place in survival history. From Native Americans to tribes in New Guinea, the Blow Gun and primitive darts have put food on the table for thousands of years. They are silent and deadly hunting tools, especially for small game. Oftentimes, especially here in the US, natural cotton was used as blow dart fletching. Thus, the cotton from a tampon is a perfect candidate to make cotton-fletched blow darts. I used the string on the tampon to lash it into place on this bamboo skewer.

Yes, I have a tampon in my mouth – again. This time, though, I’m blowing instead of sucking. Wow…this section is off to a really weird start. In a survival scenario, a simple container can make the difference between life and death. A water-tight container can be used to carry water, boil water, and cook meals. Natural water-tight containers aren’t easy to make or find. A very practical and useful improvised container can be made by using hot coals to burn out a cavity in a log or stump. A blow-tube (in this case the plastic tampon applicator) can be used to intensify the hot coals to burn the cavity.

Using the tampon applicator blow-tube, it took me about 30 minutes to coal burn a cavity large enough to hold 2 cups of water. If necessary, I could then boil and purify this water by adding in several red hot stones that had been heated in a fire.

In wet and damp conditions, keeping fire-starting tools such as matches and tinder dry can be a challenge. The waterproof tampon package/sleeve makes an excellent improvised “dry-sack” for any items that are moisture sensitive. Just fold over the top 2-3 times and tie it off with the tampon string and you’ve got a great waterproof match case.

Fishing with hook and bobber is an incredibly effective method – especially when using live bait such as grubs and worms. A thorn hook, some natural braided line, and a tampon bobber make the perfect combination for a survival fishing rig. Watch out Blue-Gill!

Make the bobber with the tampon package/sleeve by folding over and tying off the top to create a little bubble that will float your bait. If the package isn’t water-tight, just put some of the cotton inside and it will float just fine. Then, simply tie it to your fishing line.

I am a huge fan of multi-functional products that can serve double or even triple survival duty. For the size, weight, and cost, a tampon has an impressive list of survival functions. If nothing else, this post is another lesson in the importance of looking at everyday products through the eyes of a survivalist.Creativity and innovation are critical.

So what did you decide? Are you manly enough to include a tampon or two in your survival kit?

Remember, it’s not IF but WHEN.