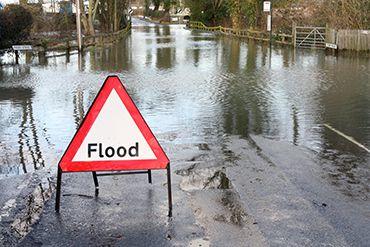 A flood is defined as an overflow of water that submerges land which is normally dry. In the United States, there are various causes for flooding, including:
Flash Floods: Flash floods usually develop shortly after a nearby heavy rain. I say nearby because it doesn’t have to be raining at your location for rising water to endanger you. These floods create a rapid rise of water, especially in low-lying areas like floodplains. Causes of flash flooding include heavy rain, ice jams, and levee or dam failures. This is especially common in the western United States where normally dry areas next to steep terrain might fill with rushing water.

River Flooding: River flooding can be caused by heavy rainfall, dam failures, rapid snowmelt and ice jams. Normally flow can become turbulent rapidly as in a flash flood. In other cases, water levels may rise slowly but steadily. Either way, the result threatens structures and populations along its course.

Storm Surges: Tropical (or even non-tropical) storm systems can bring heavy winds, but most damage occurs as a result of flooding due to the storm surge. Storm surge is the rise in water generated by the storm above normal tide levels. When the storm approaches the coast, high winds cause large waves that can inundate structures, damage foundations, and cause significant loss of life.

Burn Scars: The Western U.S. has had significant wildfire activity, most recently in California. After a fire, the bare ground can become so hardened that water can’t be absorbed into the ground. This is known as a “burn scar”. Burn scars are less able to absorb moisture, leading heavy rains to accumulate water wherever gravity takes it.

Ice Jams: Northern areas of the continental U.S. and Alaska may have flooding as a result of ice jams. When moving ice and debris are blocked by an obstruction, water is held back. This causes flooding upstream. When the obstruction is finally breached, flash flooding occurs downstream. Many ice jams occur at bends in a river.

Snowmelt: Snowmelt flooding is common in mountainous Northern U.S. states. Snow is, until temperatures rise above freezing, just stored water. When it gets warmer, the snowmelt acts as if it were rain and flooding can occur.

Barrier Failures: When a dam or levee breaks, it can be due to excessive rainfall, erosion, landslides, earthquakes, and many other natural causes. Some dams fail as a result of man-made issues, such as negligence, improper maintenance, and even sabotage. As a result, water level can overflow the barrier or water can seep through the ground.

FLOOD PREPAREDNESS
Most people have heard of hurricane or tornado watches and warnings, but the U.S. weather services also tries to warn the populace of flooding. A “flash flood watch” means that flash flooding is possible in the near future; a “flash flood warning” means that flooding is imminent in the area.
If you live in a low-lying area, especially near a dam or river, then you should heed warnings when they are given and be prepared to evacuate quickly. Rising flood waters could easily trap you in your home and you don’t want to have to perch on your roof waiting for help.

To make it safely through a flood, consider the following recommendations:
Hit The Road Early
Make the decision to leave for higher ground before flooding occurs and roads are blocked. Having a NOAA weather radio will keep you up to date on the latest advisories. When the authorities tell you to leave, don’t hesitate to get out of Dodge.
Be Careful Walking Through Flood Waters
Drowning is the most common cause of death during a flood, especially a flash flood. Rapidly moving water can knock you off your feet even if less than a foot deep. Even calm flood waters are often murky and hide debris that can cause injuries if you walk through them.
Don’t Drive Through a Flooded Area
In a flood, many people drown in their cars as they stall out in moving water. Most vehicles can be carried away by water just two foot deep.Road and bridges could easily be washed out if you waited too long to leave the area. Plan before a flood occurs to see if there is a “high road” to safety.

Beware Of Downed Power Lines
Watch for downed power lines; electrical current is easily conducted through water. You don’t have to touch the downed line to be electrocuted, only step in the water nearby. There are numerous instances of electrocutions occurring as a result of rescuers jumping into the water to try to save victims of a shock.
Don’t Drink The Water
Water, water everywhere, but not a drop to drink: Flood water is not clean water. It is contaminated by debris and water treatment plants may even have been compromised by the disaster. Have a reliable way to purify water and a good supply of clean water stored away. 12-16 drops of household bleach will sterilize a gallon of water (a teaspoon for 5 gallons), but a filter might also be needed to eliminate debris. Wait 30 minutes after sterilization to drink.

Have Supplies Handy
Flood waters may not recede quickly. Besides water as mentioned above, have non-perishable food, bottled water, heat and light sources, batteries, tools, extra clothing, a medical kit, a cell phone, and a NOAA weather radio among your supplies.
Turn Off The Power

If you have reason to believe that water will get into your home, turn off the electricity. If you don’t and the water reaches the level of the electric outlets, you could easily get electrocuted. Some warning signs might be sparks or strange sounds like crackling, popping, or buzzing.

Beware of Intruders
Critters that have been flooded out of their homes may seek shelter in yours. Snakes, raccoons, insects, and other refugees may decide your residence is now their territory. Human intruders may also be interested to see what valuables you left behind.
Watch Your Step
After a flood, watch where you step when you enter your home; there will, likely, be debris everywhere. The floors may also be covered in mud, causing a slip-and-fall hazard.
Check for Gas Leaks
Don’t use candles, lanterns, stoves, or lighters unless you are sure that the gas has been turned off and the area is well-ventilated.
Avoid Exhaust Fumes
Only use generators, camping stoves, or charcoal grills outside. Their fumes can be deadly.
Clean Out Saturated Items Completely

If cans of food got wet in the flood, their surfaces may be covered with mud or otherwise contaminated. Thoroughly wash food containers, utensils, and personal items before using.

Don’t use appliances or motors that have gotten wet unless they have completely dried. You might have to take some apart to clean debris out of them.

Use Waterproof Containers for Important Stuff

Waterproof containers can protect food, personal items, documents, and more.  If your area is at risk for flooding, have the important stuff protected by storing them correctly.
Floods are just one of the many natural disasters that can endanger your family and turn your home into a ruin. With planning and some supplies, however, you’ll be able to keep your loved ones safe and healthy.