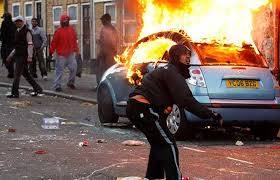 What are you prepping for? Is it a natural disaster like a wildfire, tornado or hurricane? Those are perfect examples of common events that occur every day. Nature has a way of dealing us unexpected circumstances from time to time and we, as humans try to roll with the situation as best we can. That is one of the benefits of prepping in that you are proactively planning for events, and the fallout of events now before you find yourself possibly affected by disaster. There are large and small examples of emergencies but prepping gives you a method of working through examples and making potentially lifesaving decisions all from the comfort of your computer or as in Sideliner’s case; the easy chair.

From a big-picture perspective we can look at regions where certain types of natural disasters are more common. If you live in areas where you have identified many potential risks as part of your prepping plan, some people advocate designing your own threat matrix. A threat matrix is really just a decision-making system where you assign a level of risk and probability to each disaster. This is supposed to help you decide which disaster is more likely or impactful to your life and thus should be worked on first. For example, California has routinely seen floods, earthquakes, mudslides, wildfires and you have to throw in the risk of blackouts, riots, nuclear fallout and most recently drought. You could line all of these threats up on a page, assign them a number and a risk and start making plans accordingly. Now that I think of it, why would anyone want to live in California anyway?

As a resident of California this might make sense because you have seen the first-hand effects of these disasters, but what if there was a different type of emergency that we haven’t really seen in this country before? What preparations would you make if you knew now that the FEMA tents weren’t going to be popping up, truckloads of relief supplies weren’t headed your way and that sooner or later scores of news media and Red Cross volunteers weren’t going to be descending on your town to document the devastation?

WROL is a term that means Without Rule of Law. I don’t know who coined it first but it seems to accurately describe the worst type of scenario preppers imagine. A WROL world could spring up spontaneously or it could grow out of some relatively common natural disaster. To imagine a WROL world you would simply have to imagine no police, fire or ambulances coming to your aid. In a WROL world you would be on your own or left with your band of friends and neighbors to provide for yourself all of the services that are now gone.

If you look around you might have seen glimpses of a WROL world even if they are quickly controlled. Looting is an example of WROL behavior and so are riots. The two go hand in hand but the police rely on controlling the crowd to a large extent to keep these events from growing much larger than they are. If the police are not available or are overwhelmed, what happens then? When the rioters and looters don’t have any reason to stop the spread of rage and violence, what do they move on to next?

Imagine something as benign as the power grid failing for some arbitrary period. Let’s say a fluke takes out the power for the entire eastern seaboard for one month. This could be a terrorist caused outage, solar flare or some random chain of events that causes a domino effect of failures to equipment and systems. Imagine also that this happens in August and the east coast is also experiencing warmer than usual weather.

Without power, what could possibly happen in the US? Do you think riots would break out? Could you see looting of stores? Without power there would be no way to refrigerate food. You wouldn’t be able to pump gas, run credit card machines or ATM’s, air conditioners or ice makers. Cell towers would be ineffective. Would you be able to go to work? Not likely unless your job involved something manual that was completely not reliant on electricity or fuel. My job is 100% dependent on the internet and electricity. Public transportation would be down and even government services would be unable to help. So what would millions of hot, hungry and panicked people do?

What would you have to worry about in a WROL world?

Is this all a fairytale? Maybe. There are a lot of people who believe nothing bad like this will ever happen and that our way of life will keep on chugging along in more or less the same fashion it always has. I have said many times that I hope that is our shared reality, but I am planning for the chance that it doesn’t. My own threat matrix is my gut. You will find no shortage of people who say worrying about things like this is a waste of effort.

By very definition WROL means there is law and order so normalcy is pretty much out the window. With a failure like this there wouldn’t be enough police, National Guard or military combined to help everyone out. All of these soldiers, police and firemen would have their own families to watch over most likely and I could see many of them, if forced to choose between going to work stopping a riot or staying at home to defend their wife and kids would choose the latter. Again, there will be those who disagree and say that the professional soldier, police officer or fireman would never abandon their post and communities will rally together to take care of one another in times of crisis. Maybe when the crisis is over, but not while everyone is going through it.

What can you do now to prepare for WROL?

My WROL scenario above is relatively short-lived. There have certainly been natural disasters where the destruction caused power outages for a long time. In my example, presumably we would have half a country that could rally to help us but assume for a second help isn’t on the way. You are on your own for a month of potential lawlessness. Imagine a month of the Purge lived out in real life?

Who makes the best target? They guy right in front of you. If there is widespread violence being carried out in the name of rage or of need, stay far away from it. You don’t want to be anywhere near the chaos that is going on and it would be better to let it burn out as much as possible before it gets to you. In this case bugging out may be your best option so have a plan for that contingency in your back pocket. In my scenario you would have plenty of time to make that decision, but you should have prepping supplies together before the ability to acquire them has passed. This includes everything you need for food, water, shelter, security and hygiene for a minimum of 6 months. Start small if you have to.

Use the buddy system

If you do have to travel or bug out, you don’t want to go it alone. Someone needs to be there to watch your six and potentially pull you out of trouble. In a without rule of law world, I foresee deadly force as being much more prevalent and warranted if your life is in danger. I am not saying to go out and shoot people walking down your street, but if they are threatening your life then you have a choice to make. It is better to consider this now as opposed to in the moment even though I realize and admit that thinking about killing someone is a lot different from actually pulling the trigger.

Keep an eye out

If there is a real threat of violence in your neighborhood, you won’t be able to simply lock the door and hope they will go away. If you haven’t already, post-event you should form up with your neighbors immediately to draw up plans for security and address any needs of anyone in your local group. Whatever you did or didn’t do before the event will need to go out the window if you want to survive. It takes more than one person to stand guard all night.

And legally. I am a big advocate of responsible firearm ownership. This assumes you have the training and knowledge of how and when you should discharge that firearm in the course of defending your life. It has been said that the only thing that stops a bad guy with a gun is a good guy with a gun and I believe that. Just make sure you are the good guy in this situation.

A WROL world is what I envision as a mixture of a war zone and a mad-max movie rolled all into your favorite disaster flick. Essentially, I never want to go through anything like this but if something this catastrophic comes your way, you better make sure you have a plan and you are ready to go.